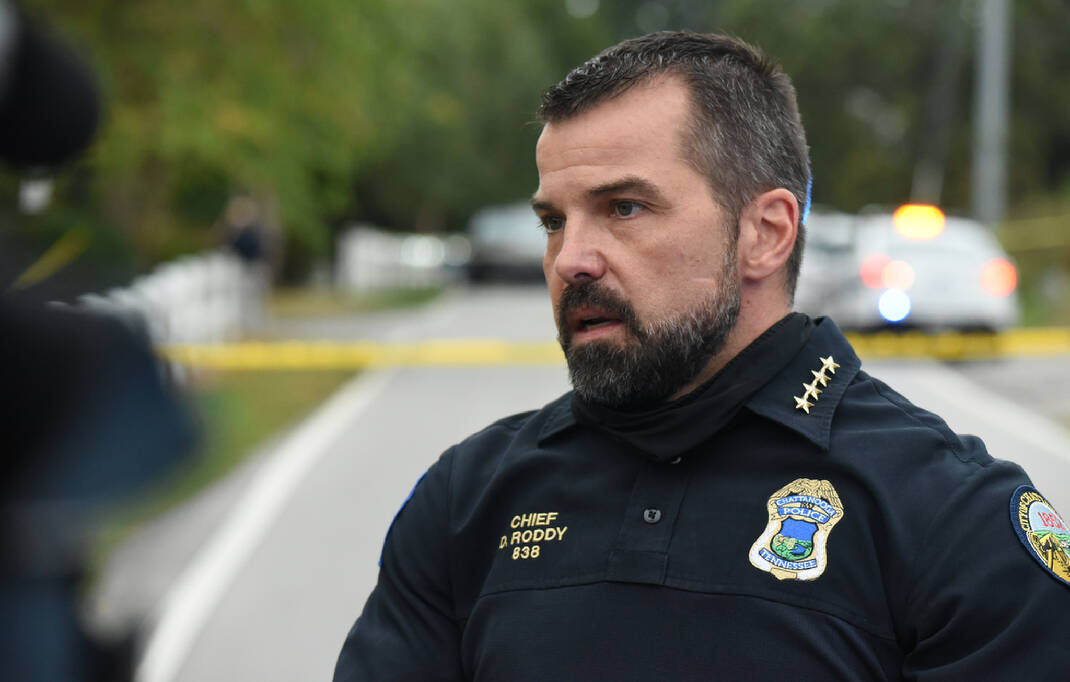 Chattanooga police Chief David Roddy announced his retirement Monday, resurfacing questions about who is best suited to lead the department.

Roddy, a graduate of Middle Tennessee State University, has been with the department for 26 years and was sworn in as chief in August 2017.

In a statement, Roddy said he believes one of the most critical aspects of making big decisions has been timing — “with a particular focus on professional timing.”

“I am now focusing on personal timing,” he said. “The last 26 years of my life and my family’s life have been connected with the Chattanooga Police Department. It’s now time for that energy to go to my family and the next chapter of my life.”

In his two-plus decades with the department, Roddy has served as chief, acting chief, chief of staff and a captain of multiple divisions along with many years in patrol, narcotics, and gang investigations. He served 14 years on the department’s SWAT team, much of that time as the team’s commander.

During his tenure, Roddy put an emphasis on working with the youth in the community and made it a point for the department, under his leadership, to make a connection with young people.

Roddy and the police department collaborated with companies and organizations such as Unum, YCAP, PlayCore, UTC, the Boys and Girls Club, Big Brothers Big Sisters and several other businesses and nonprofits to help create a support system for at-risk youth in Chattanooga.

The department said in the news release Roddy had also ushered in an environment for police officers, children and community members to engage in more relaxed settings through the School Liaison Program, Handle with Care and Front Porch Lineups.

Roddy is also the only officer from the Chattanooga Police Department to graduate from the FBI National Executive Institute, an intensive training program for chief executive officers of the nation’s largest municipal, county and state law enforcement organizations.

Though it was rumored during his campaign that Kelly planned to remove Roddy and hire a person of color to serve in the role, Kelly consistently praised Roddy publicly and said he would not look to replace him when elected.

Chief David Roddy announced his retirement effective July 30, 2021 after serving with the department and for the people of Chattanooga for 26 years. He was sworn in as Chief of Police of the Chattanooga Police Department on August 31, 2017. https://t.co/DQ6tyvJRYn pic.twitter.com/sFRBn7SXyT

“He’s done a great job in challenging times, and there’s no reason. I’ve given my word. I think he’s the right guy,” Kelly said in March. “We’ll get to know each other better once I’m in there and we collaborate on a vision for the department based on community policing and public safety and transparency and accountability and all that. And we’ll move forward.”

A spokesperson for Kelly said Monday that the retirement was completely voluntary.

“As I said many times during the campaign, I am deeply grateful to Chief Roddy for his dedication to community policing, and for working with our neighbors to progress the CPD toward an inclusive and effective department driven by best practices and a love for our city,” Kelly said in a news release on Monday.

“I was especially proud of his leadership last summer as he engaged in peaceful dialogue with residents attending protests every night, working to listen and to learn from our community. Moreover, as chief, he has invested in innovative solutions and community engagement to reduce crime, clear cases and protect our residents,” he said.

Kelly said Monday he will open the search for a new chief to candidates nationwide in order to find the best fit.

In a released statement, Kelly said he will form an advisory committee to help find a chief who “has a demonstrated commitment to civil rights, equity and best practices” and will engage the International Association of Chiefs of Police in the search process.

“While I’m sad to see him go, I appreciate his willingness to help us continue the work that he started,” Kelly said. “The ideal candidate will have strong qualifications and will have a track record of setting departmental culture and policies to drive equitable policing in our community. I am committed to finding the best person for the job, and I’m grateful to CPD’s current Chief of Staff and Deputy Chief Tucker for stepping into this interim role as we work to define the next chapter of public safety in Chattanooga.”

Asked what role diversity will play in the search process, a spokesperson for Kelly said the diverse search committee will help find the best candidate, adding that the mayor did not commit to appointing or pursuing a candidate with any specific demographic background, noting it is illegal to discriminate against candidates based on race.

“Mayor Kelly will hire the best person for the job, and he expects that leading candidates will have a demonstrated commitment to civil rights, neighborhood policing and community engagement, as well as the skills and qualifications to protect our residents and reduce crime,” said Ellis Smith, director of special projects for the mayor’s office.

“That’s why the mayor is working to build a diverse team of community leaders who will help guide the search process and ensure that we find the best fit for our city.”

During the campaign, community leaders including a coalition of Black clergy members called for the next mayor to appoint a person of color to the position of chief.

In the announcement, Roddy and the department said Roddy’s last day on the job will be July 30.