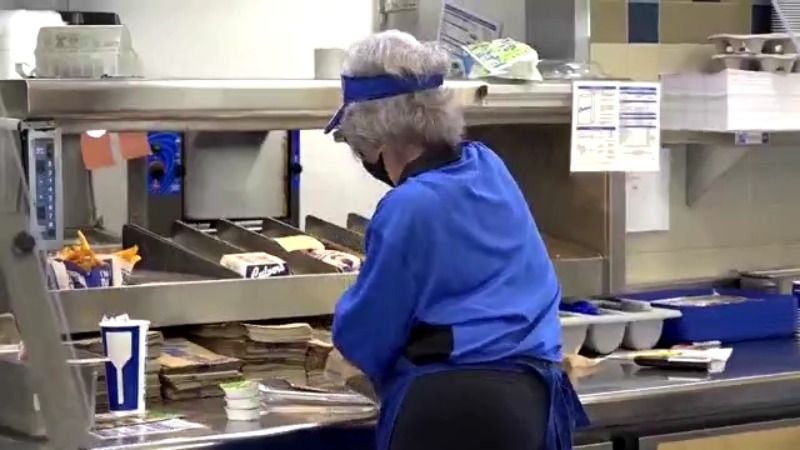 by: WTOL via CBS Newspath

When one of their longest regulars found out the dining room at a Culver’s in Findlay shut down, she didn’t take her frustrations online. Instead, she took herself into the lunch line. The Culver’s has been drive-thru-only since last month.

“Bonnie was walking up, and she is a regular, so I met her at the door and I explained that we were closed,” Doxsey said. “And she’s like ‘no I’m here for an interview,’ and I was like, ‘what?!’”

“And I said what can I do to help? And they said ‘you can help us until we can get it open, and take food to cars’,” Bonnie August said.

August said she was one of the first people in the door when this Culver’s opened, and has been a regular ever since.

She said she missed sitting down and eating at her favorite restaurant regularly with her circle of friends, and decided it was time to step up and join the team. Her days of retirement are over. August now works six days a week for three to four hours taking drive-thru orders out to cars.

She said she missed sitting down and eating at her favorite restaurant regularly with her circle of friends, and decided it was time to step up and join the team.

Her days of retirement over… Bonnie now works 6 days a week, for 3 to 4 hour shifts taking drive thru orders out to cars.

“Everybody pitches in, everybody works together,” August said. “It’s not a one-person operation, we all pitch in where we’re needed.”

August isn’t quite sure how long she expects to continue working once it does reopen.

“Well, I don’t know. I mean, as long as they’ll put up with me,” August said, laughing.