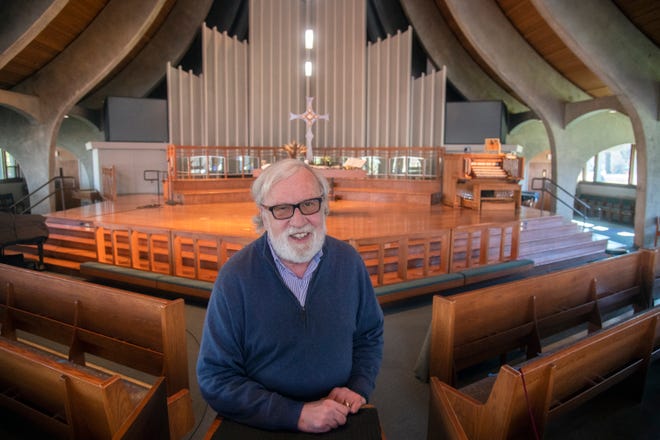 STOCKTON – After decades of serving the community and touching the lives of countless families in Stockton, Alan Cook is retiring as director of Family Ministries at Central United Methodist Church.

Incredibly, says someone who’s had a hand in everything from educating children and arranging dinners for struggling families to ministering to families and helping build homes for the needy all over the world, the part of retirement he’s most looking forward to isn’t hitting the beach or settling into a recliner.

“When you ask about what I want to do is,” says Cook, 66, “I think I want to repay the community, because I have been so lucky. I have met amazing people.”

Those who know him say that sense of service and selflessness personifies Cook’s humility and dedication.

“Alan Cook is a gentle and compassionate soul with immense love for his community. He blends those traits so well, and the result is an ongoing, positive impact on those he serves,” said Mike Klocke, community relations director at University of the Pacific, who has been a friend of Cook’s for decades. “Whether it is principal of St. George Parish School in south Stockton, a mid-year career decision to attend religion school or his deeply impactful and varied work at Central United Methodist Church, Alan has a consistent mantra: ‘How can I help?’ ”

Before taking the job at the distinctive church across from Pacific – Cook’s alma mater, and where he met his wife of 43 years, Jane Dyer Cook – he served as development director at Pacific’s KUOP, then several nonprofits before taking a teaching job at St. George Parish School. He didn’t set out to lead the school, but that’s exactly what happened when Sister Mary, who was retiring, began not-so-subtly – “like, every other week” – nudging him to apply for the principal’s job. “Nuns have a way of being persistent,” Cook joked.

And that’s the story behind how a through-and-through lifelong Methodist – his late father was a Methodist pastor as well – came to be the first Protestant principal at the Catholic K-8 private school – and later was able to attend the canonization service for the famed Archbishop Oscar Romero at the Vatican in Rome. That, Cook says, really speaks to the ecumenical and cross-cultural spirit of Central.

As do repeat performances at Central by the Sacramento Gay Men’s Chorus, which he was instrumental in arranging. “I think for our congregation, which is a reconciling congregation, it meant a lot to be able to host this group of men,” he says.

“I know I am biased but I believe he has been a real force for good in Stockton, his adopted community,” Jane Cook said in an email. “He has worked hard to build bridges over the canyons that divide this city and his colleagues and community members can attest to that.”

Of his time as principal at St. George, Cook says, “It just was an amazing experience. And working in South Stockton … people taught me a lot about life. And I grew a lot there. I became a lot more aware of the world and how important education is and how important a religious education is.”

After leaving St. George, Cook made a mid-career move to pursue his master’s degree in divinity at the Pacific School of Religion on Berkeley’s so-called Holy Hill, and has been director of Family Ministries since 2005 at Central United Methodist Church, where he had been youth director and he and his wife, son and daughter had been active. Taking the job was a natural fit, Cook said.

“I said, ‘This guy needs to be on the staff because he’s doing such a great job here,’” recalled the Rev. Dave Bennett, retired pastor at Central. “He’s been here ever since and just done the most wonderful job.

One aspect Cook especially loves is his involvement with a close-knit gourmet group, now in its fourth decade.

Since the 1980s, the group has met monthly in one another’s homes (virtually during the pandemic), where they shared mouth-watering dinners – mostly.

“Probably the worst one was I made a garlic soup one year. And it was cold and it turned out horribly, like everybody kept going to the kitchen with their soup bowl,” he laughed.

All kidding aside, the friendships built over those years have been priceless, he says.

“We have seen so much. We’ve seen, you know, our children grow up together, their marriages, some of us getting divorces. … So it has been a wonderful gift.”

‘A special bond in my heart’

In addition to his work at Central, the Cooks have made literacy and education efforts an important part of their lives, both at Pacific and in the neighborhood communities. They served on the alumni board, started a children’s book collection at the university’s library, and have endowed a liberal arts scholarship, the Alan B. and Jane Dyer Cook Endowed Scholarship. Alan Cook said one thing he really wants to tackle in retirement is education, building on the years of work he and the church have done with nearby Cleveland Elementary and the surrounding neighborhood.

“Cleveland school has a special bond in my heart,” Cook said of the school, which this year marked 32 years since a man walked onto the campus during recess and opened fire on Jan. 17, 1989, killing five children and wounding scores more before turning the gun on himself. Many of the children were recent immigrants whose families had fled the Cambodian genocide; the shock and heartbreak weighed heavily on the church, which has its own Cambodian congregation with Khmer-language services dating back to the early 2000s.

“He loves everyone with no doubt, no race, no color and no richness or poor,” retired Cambodian Pastor Kien Srey said of Cook. “He helps them all. God will continue to bless him wherever he goes or does.”

Cook was instrumental in helping facilitate Cambodian genocide survivors’ oral history interviews in 2012, and this past Christmas, he wanted to make sure every kindergartner at Cleveland got a book as a gift at the end of a difficult year for many. After putting out a call on Facebook for 90 books, he got 160 – “so every kindergartner and first-grader at Cleveland School got a wrapped gift,” he said. He’s hoping to grow that this fall, building on the church’s longtime Cleveland Initiative outreach to the school’s families, which has included hosting dinners, supporting teachers, providing tutors to the school and to Park Village, and more.

“For the past 12 years, we’ve provided the readers for the Rotary Read-In at Cleveland,” he adds. “So that would be probably one of my high points of my Central career, is that that bond between our neighbors.”

It’s a bond that’s spanned oceans; during one church retreat to Cambodia, Cook recalled visiting one of the capital city’s schools that had been converted into a notorious prison during the Khmer Rouge reign, when some 2 million Cambodians lost their lives. Tens of thousands were tortured at Phnom Penh’s Tuol Sleng, now home to a heartrending killing fields museum.

“I walk through this school, seeing all the pictures of the people that had died and the horrible conditions,” he recalled. “I learned later that one of my high school student’s parents escaped from that prison. His mother told the story of her escape, … hiding in the fields.”

Less than a handful of Tuol Sleng’s prisoners survived, and fewer are known to have escaped; that one ended up in Stockton is astonishing.

During his time at Central, he’s also taken part in trips to El Salvador, Honduras and Nicaragua, as well as Malaysia, Singapore and Vietnam. In Honduras, they helped build two houses, one for a homeless mother, even making their own bricks. In turn, he’s also hosted students who came to Stockton to take part in projects through the Sierra Service Project, an ecumenical Christian nonprofit organization that’s chipped in at homeless shelters, playground areas and the PUENTES community farm.

“It was wonderful that these high school students from California were coming to Stockton to make a difference in our community,” he says. “Because they came with this fear, … this fear of what was going to happen to them when they were in Stockton. And they left Stockton with a much better understanding of what a Valley community is like.”

The Rev. Jeffrey D. Hall, now senior pastor of San Jose First United Methodist Church, took the mantle from Bennett in 2013. “Over the next six years, I was blessed to serve alongside such an amazing person,” Hall says of Cook.

“Central will no doubt miss Alan, and the many gifts he brought to that community of faith – his creativity, playfulness, work ethic, and connections with the greater Stockton community,” Hall said. “People love and trust Alan because they know he genuinely loves and cares about them.”

Record reporter Elizabeth Roberts covers community and breaking news. She can be reached at eroberts@recordnet.com or on Twitter @eroberts209. Support local news, subscribe to The Stockton Record at https://www.recordnet.com/subscribenow.