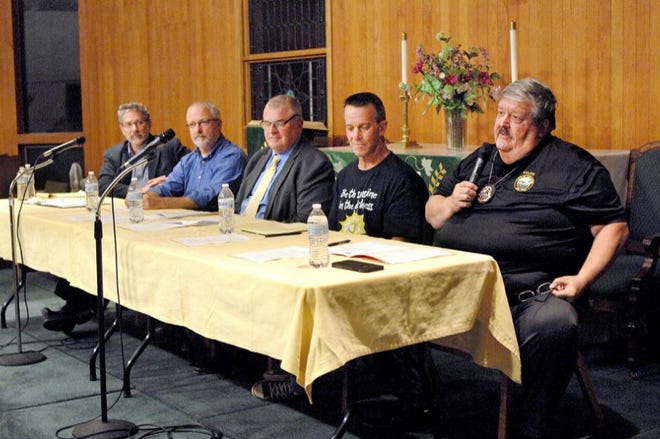 YORK, Maine — The former police chief who retired Oct. 1 amid unanswered questions received a $50,000 payout under the terms of a severance agreement made public Tuesday, Oct. 12.

From the town’s perspective, the matter is now closed, Burns said Tuesday. He declined to comment on the details of the agreement, referring instead to the document itself.

York Police Department Deputy Chief Owen Davis is now the acting chief. Burns said he will not consider hiring a new YPD staff member until the end of the year.

Szeniawski, who has not responded to multiple requests for comment in the months since he was placed on leave, did not respond Tuesday to a request for comment about the severance agreement.

Szeniawski’s regular pay from the town stopped effective Sept. 10, according to the agreement. The money from the agreement was to be paid to Szeniawski last week in one lump sum. The town will continue to provide health insurance coverage through Oct. 31.

Additionally, the town and Szeniawski entered a non-disparagement agreement, which means Szeniawski is forbidden from saying anything disparaging, defamatory or false about the town and the experience of working there, unless otherwise required by process of law.

Representatives from the town are likewise barred from making statements that disparage the former police chief, whether directly or indirectly.

“Further,” the agreement states, “York agrees that, except as may be required under compulsion of law, York, any employee, member or representative of York, shall make no representations or statements, either direct or indirect (in the form of oral or written statements) to anyone (including, but not limited to existing or former of York, or to any representative or agent of the media) that disparages Police Chief. York further agrees not to induce, incite, or encourage others to make derogatory statements, either oral or written, or otherwise disparage Police Chief.”

The town also agreed not to disclose any claims or allegations about Szeniawski or the terms of the severance agreement, except as required by law, court order or to carry out the agreement.

Szeniawski agreed not to file complaints, charges, legal actions or other proceedings against the town based on conduct or matters occurring prior to the date of the agreement. However, Szeniawski retains the right to file a charge with and participate in an investigation or proceeding conducted by the Maine Human Rights Commission or federal Equal Employment Opportunity Commission.

When he announced Szeniawski’s retirement, Burns read a prepared statement from the departing police chief.

“I’ve enjoyed serving the public throughout these years and know the organization will continue to accomplish outstanding work, provide great service and continue to be a leader in law enforcement,” Szeniawski said in the statement read by Burns. “I thank you for the opportunity to serve as chief of police.”

That quote that Burns read in late September came from Szeniawski’s resignation letter, which the town released Tuesday.