When Justice Stephen Breyer rules (on retirement), the White House might know first 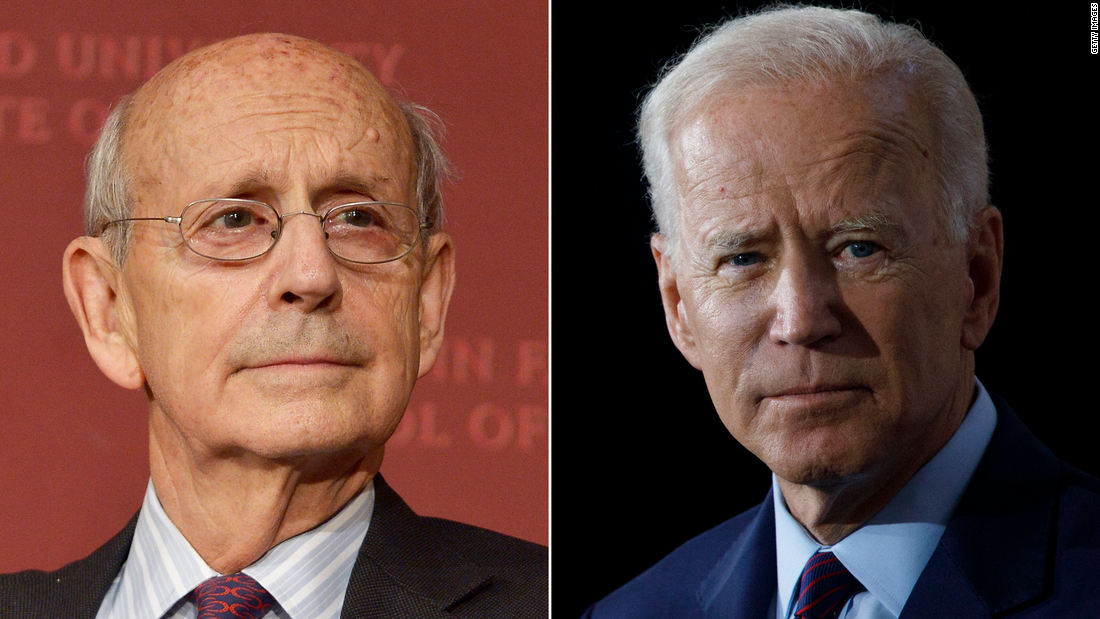 Breyer, 82, has declined to speak publicly on any retirement intentions. But if he decides to step down this spring or next, history suggests he will slip early word to President Joe Biden and the public will not know until weeks later.

That was the protocol for Breyer’s predecessor, Justice Harry Blackmun, in 1994, when he privately told President Bill Clinton months before his retirement announcement on April 6. More recently, Justice John Paul Stevens in 2010 quietly passed his intention to retire to President Barack Obama.

Obama’s administration then reached out behind the scenes to possible candidates. White House counsel Bob Bauer called now-Justice Elena Kagan on March 5, 2010, according to details she later provided to the Senate Judiciary Committee. Only when Stevens formally announced on April 9 did the public learn he was leaving.

The pattern is not confined to Democratic presidents. In March 1981, two months after Republican Ronald Reagan became president, Justice Potter Stewart invited then-Attorney General William French Smith to his Washington home and told him in confidence that he would be stepping down that June. The conversation triggered a stealthy search for the first female justice, as Reagan had promised as a candidate. Reagan settled in July 1981 on Sandra Day O’Connor, then an Arizona state court judge.

Breyer did not respond to questions about his retirement plans or any White House contact.

He has appeared healthy and energized in his many extracurricular Zoom appearances with academic and legal groups. He speaks from the Cambridge, Massachusetts, home he shares with his wife, a daughter and three grandchildren, rather than from his usual chambers lined with a private collection of antique books. Breyer enjoys many off-bench pursuits, including architectural study, and some people close to him believe his understanding of nomination politics, along with those varied interests, would prompt him to retire this year or next.

A White House spokesman declined to comment Wednesday on whether any Supreme Court justices have signaled their intentions to retire.

Opportunity to make a mark

A Supreme Court vacancy presents any president with a tantalizing choice and an enormous chance to make a mark on American law. But the selection and confirmation of a justice can also be time-consuming, politically fraught and a distraction from other executive branch business.

Ideally, a new White House would prepare for the opportunity but not be overwhelmed by it, as Cabinet officers are confirmed, legislative priorities launched and nominations for lifetime lower-court seats begin.

Once a high court vacancy becomes public, the pressure from would-be nominees and their supporters intensifies. Biden vowed during the 2020 campaign to name the first African American woman to the bench, so supporters of individual Black jurists have already been making their cases in public and private.

Other African American judges who enjoy significant support in legal circles and among liberal advocates include US District Judge Ketanji Brown Jackson, based in Washington and a former law clerk to Breyer, and California Supreme Court Justice Leondra Kruger, a former law clerk to Stevens and lawyer in the US solicitor general’s office, where she argued regularly before the nine justices.

When Biden first made the pledge during a February 2020 debate in Charleston, South Carolina, he said, “I’m looking forward to making sure there’s a Black woman on the Supreme Court, to make sure we in fact get every representation.”

RELATED: John Roberts has another chance to diminish the Voting Rights Act

This President is a veteran of selection politicking, as is his chief of staff, Ron Klain.

Biden, a senator for more than three decades, chaired the Senate Judiciary Committee, including during the Supreme Court confirmation hearings for Robert Bork in 1987 and Clarence Thomas in 1991. (The Senate voted down Bork and confirmed Thomas.) Klain served as the Judiciary Committee chief counsel from 1989 to 1992.

Breyer has his own earlier connection to the Judiciary Committee. He was committee counsel in the mid-1970s and its chief counsel in 1979-1980. Even after becoming an appellate judge and then a Supreme Court justice, Breyer remained captivated by Senate politics and would be aware of the benefits to Biden of a Democratic-controlled Senate. Republicans, who earlier held a narrow majority, confirmed President Donald Trump’s three nominees after abolishing the rule requiring 60 votes to break a filibuster.

For the Supreme Court, now controlled by a 6-3 conservative-liberal majority, a Breyer retirement and succession by another liberal would not alter the ideological split. Yet a Biden choice would offer new diversity and youth.

In his 27 years on the high court, Breyer has been a low-profile but crucial player. He is a solid liberal but believes in bridging differences when possible and has tried to find compromise between the right-wing majority and remaining liberals. When conservative Chief Justice John Roberts has shifted to the center, as when he voted in 2012 to uphold the Affordable Care Act, it has often involved some negotiations with Breyer and fellow liberal Justice Elena Kagan.

While early word of a retirement forces an administration to focus on candidates, a White House team typically has some list of possible names ready if an opening suddenly occurs.

Similarly, when Justice Antonin Scalia died in 2016, Obama chose Judge Merrick Garland, who had previously been on his Supreme Court short list. The Senate Republicans refused to hold a hearing or vote on Garland’s nomination for nine months, leaving an immediate vacancy for Trump. Biden has selected Garland to be his new attorney general.

During President George W. Bush’s first term, his legal team interviewed appellate judges for possible elevation, but it was only in his second term that an opportunity for appointment arose. (Justice O’Connor announced her intention to retire on July 1, 2005, and Chief Justice William Rehnquist died two months later, on September 3.)

Former Attorney General Alberto Gonzales referred in a memoir to Bush’s “habit of going with his gut” and wrote that “it was all the more important that I meet with the serious contenders and get to know them on a personal level. Well before any Supreme Court vacancies occurred during the Bush administration, I met privately with Samuel Alito and Emilio Garza in my West Wing office. I met with Michael Luttig at his home in northern Virginia. I spent an hour with John Roberts in April 2005 in my office at the Department of Justice.”

Such serendipity can upend plans. But one consistency in recent decades has been spring timing. Justices announce their retirement intentions to coincide with the last weeks of the annual Supreme Court term. That way, a presidential choice for successor can be subject to the Senate confirmation process in the summer and ready for the new session, which begins on the first Monday in October.

When Clinton first took office in 1993, Justice Byron White revealed his decision to retire on March 19. He said he would leave in late June when the court began its summer recess but that he wanted to give Clinton sufficient time to choose a successor. (Clinton selected Ginsburg.)

Justice White decided against giving word secretly. Rather, he asked a former law clerk then serving as an associate White House counsel to convey his retirement letter to Clinton. The Supreme Court then made White’s letter public.

In White’s brief letter, the justice wrote that after 31 years on the high court, he thought “someone else should be permitted to have a like experience.”