Valley News – Our Pandemic Year: Retirement in the time of COVID-19 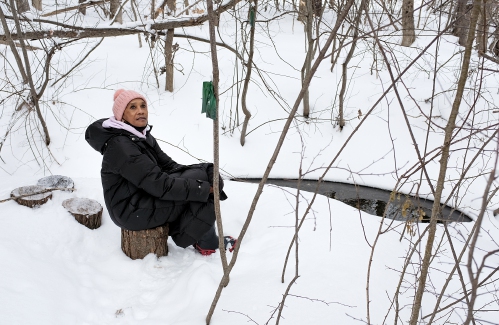 For much of her life, Evelynn Ellis has done disciplined activities that require hard work.

A clarinetist, she earned a master’s degree in music at Penn State University, then went on to get a doctorate in higher education administration.

For over 30 years she was a competitive long-distance runner, but stopped about eight years ago because of a medical condition.

After working for more than two decades at Penn State, she came to Dartmouth College in 2008 as the director of equal opportunity and affirmative action, then became vice president of institutional diversity and equity in 2011.

But the 61-year-old Ellis opted to retire early last summer, in part because of the COVID-19 pandemic, and is now finding her way through a different pace of life at the Hemlock Ridge home she shares with her husband, Al Anderson, a retired Penn State art education professor.

Though like most Dartmouth administrators she had already been working from home for several months as a coronavirus precaution, and had been thinking about retiring for a while, she still had “that shock of coming home one day and you’re retired.”

“It was just one day I was not online all day,” she recalled.

Ellis grew up in rural Hale County, Ala., where her brother is the first Black sheriff, and enjoys being outside near Dothan Brook. The Ellises’ daughter Julia is in school at Penn State.

As one of eight siblings, Evelynn also misses visits home to her family, when she used to hop on Dartmouth Coach and then fly from Logan Airport to their homes in Alabama and Georgia. She stays in touch with Zoom chats and texts, but being a person of color in the Upper Valley can also feel isolating.

“Another thing that’s so hard to communicate in a way that people understand in this community, when your core family is removed and the communities that you grew up in, and you can’t visit them, and it’s not even safe to go see communities that may look like them, down in Boston, you realize all of a sudden how white the Valley is,” Ellis said.

“And that’s hard to explain to people because they want to believe it doesn’t matter. Oh, yes it does.”

Ellis has rebuilt some of her lifelong discipline into her life at home. She gets up early, has breakfast, does some yoga or Pilates, and also has added meditation and gardening to her routine.

After lunch with her husband, she practices the clarinet.

“Then I go back, I return emails and all kinds of stuff that you think will go away, ’cause you’re not working,” she said. “They don’t.”

She tries to get outside and sit by the brook, and when the weather is warmer also goes for bike rides.

“And then before you know it, it’s already dinnertime. I’m just surprised at how the days fly,” Ellis said.

Ellis was frustrated not to be able to attend the recent funeral of her ex-brother-in-law to support her sister and two nieces, but she also is trying to stay positive through the isolation of the pandemic.

“You can either let it get you down, or you can grow. I decided I’m going to grow. All winter until I’m planting in the garden; my goal is to figure out how do I grow,” she said.

James Patterson can be reached at jpatterson@vnews.com.