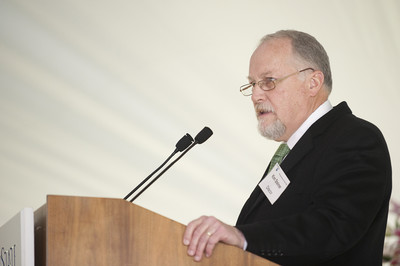 UNIVERSITY PARK, Pa. — Kim Steiner has been interested in arboreta virtually his entire career. While completing his doctorate in forest genetics at Michigan State University, he interviewed for a scientist position at the former Cary Arboretum of the New York Botanical Garden. But instead of heading to New York, he joined the Penn State College of Agricultural Sciences faculty as a 25-year-old assistant professor of forest biology in 1974.

In spring of 1975, Penn State’s then-provost Russell Larson named him to a committee studying the feasibility of establishing an arboretum on campus — an initiative that had been discussed, in fits and starts, since 1914.

“That committee’s work gradually came to a standstill as members left the University, but in 1994 the arboretum project was resurrected by a new task force of faculty and staff, which I chaired beginning in 1995,” Steiner recalled.

When trustees in 1999 approved a plan for an arboretum, to be developed on a 370-acre tract of undeveloped land adjacent to campus between Park Avenue and the Mt. Nittany Expressway, Steiner was named the founding director of what formally became known as The Arboretum at Penn State.

“So, I’ve actually been involved with this project for nearly my entire tenure at Penn State,” said Steiner, who will retire from the University in June.

His decades of contributions to planning for an arboretum, and the work he has guided since the 1990s to make it a reality, have changed the landscape of the University Park campus forever.

The Margery Enes Smith Soaring Waters fountain at The Arboretum at Penn State.

“The Arboretum at Penn State is a showcase of scientific discovery, the joy of learning and natural beauty — that is Kim’s legacy,” said Penn State President Eric Barron. “His steady leadership, vision and persistence helped us realize the dream of the Arboretum, and our University is better for his many contributions. We wish him the very best in retirement.”

After seeing site plans approved and becoming director of the planned Arboretum, Steiner still had to overcome major challenges to get the project off the ground.

“The 1999 master plan resulted in a great deal of interest in the project, but the price tag was very big, and it was clear the money would have to come from private donations,” he said. “The University gave us the green light to fundraise for the project provided we could get a lead gift of at least $10 million. It took eight years to find that lead gift — a long time to sustain enthusiasm even among supporters. Acquiring that lead gift was the biggest challenge.”

Groundbreaking occurred for the botanic gardens in 2007 on a 56-acre parcel along Park Avenue. Dedicated in 2010, the site quickly became a popular spot for visitors to stroll, learn, sit in quiet contemplation and hold events, such as receptions and weddings.

“Penn State’s mission of teaching, research and service comes to life in the Arboretum, thanks in large part to Kim’s outstanding leadership,” said Nick Jones, executive vice president and provost of the University. “His longtime dedication and hard work have been transformative and had indelible impacts. We’re very grateful for Kim’s commitment to innovative excellence and his many achievements during nearly five decades at Penn State.”

In this 1977 photo, taken off University Drive near where the Forest Resources Building sits today, Kim Steiner, professor of forest biology, surveys a makeshift nursery where he grew the seedlings that were later moved to his ash plantation.

Steiner’s patience and persistence in establishing the Arboretum perhaps were honed while conducting research in forest biology — a field in which studies sometimes go on for decades. As an example, he points to a forthcoming research paper describing what happens when trees are grown in novel environments for nearly 40 years.

“That plantation and its sister plantations at other universities were part of the first major study I led, and I had no idea that someday it would help answer urgent questions about climate change,” Steiner said. “The latent values in long-term ecological research are sometimes the most important.”

Steiner’s contributions to forest science are significant, according to Rick Roush, dean of the College of Agricultural Sciences. “Thanks to Kim and the students he has mentored, we have a greater understanding of our natural world, such as the processes driving forest regeneration following major landscape disturbances,” he said. “His research, his leadership and his dedication brought the Arboretum project, dreamed of for more than 90 years, to fruition. This will have impact for generations.”

Although the Arboretum is far from finished, Steiner said he is “elated” with progress to date. “We have placed a premium on thoughtful planning, investment in quality materials, discriminating choices in the plant pallet and good maintenance practices,” he said. “The developed area is not large, but I think these qualities show and that they make a difference.”

That appears to be borne out by the public’s reaction to the gardens. Steiner said he often hears from students, faculty and visitors that the Arboretum is their favorite part of campus.

“It seems to have become something of a treasure for many people,” he said.

“In a normal year, we conduct about 120 drop-in programs for children and their parents, and we give tours for more than 50 pre-K through 12th grade school groups,” he said. “TripAdvisor.com ranks us as the No. 2 ‘thing to do’ in State College, second only to ‘Penn State University.’ The Arboretum has become an important educational asset and cultural amenity in central Pennsylvania.

“Aside from these statistics, though, one of the most gratifying aspects of the Arboretum to me has been the realization that in a small way it has made the University an accessible and friendly destination for people who otherwise might never visit campus,” he continued. “I like to think of it as a portal to the University. That role is going to increase as the Arboretum becomes the anchor for President Barron’s cultural district, starting with completion of the new Palmer Art Museum building in 2023.”

This rendering shows a plaza and research and demonstration gardens that will be part of The Arboretum at Penn State’s new Pollinator and Bird Garden.

Steiner has a few things to accomplish before June. He chose his retirement date to ensure the oversight of construction for the new Pollinator and Bird Garden, which will be finished this spring, and to be present through the planning stage of the new Palmer Museum of Art building.

Future development will be left to the next Arboretum director. Long-range plans call for the addition of three more garden areas to finish the H.O. Smith Botanic Gardens: the Fountain Garden; an extension of the walled gardens beyond the existing Rose and Fragrance Garden; and some sort of landscaped, garden development between the Overlook Pavilion, Hartley Wood and the new art museum building.

“Coupled with the wonderful ecological restoration work we have underway in the Hartley Wood vicinity,” Steiner said, “these projects will give congruity and coherence to the core of the Arboretum property.”

Steiner said he has derived great satisfaction during his career from the professional accomplishments of some of his former students and from the leadership roles he has been privileged to hold in his professional society, on the Faculty Senate, and with The American Chestnut Foundation in its effort to restore the American chestnut to Eastern forests.

But of all of his accomplishments, “the Arboretum stands out, partly because it is tangible and permanent and partly because it was a professional gamble for me to devote so much time to the project through so many years when there was no guarantee of success,” he said.

“I cannot imagine a more gratifying task than building the Arboretum, or one within my capacity that will have a bigger impact on the quality of the University and the community.”