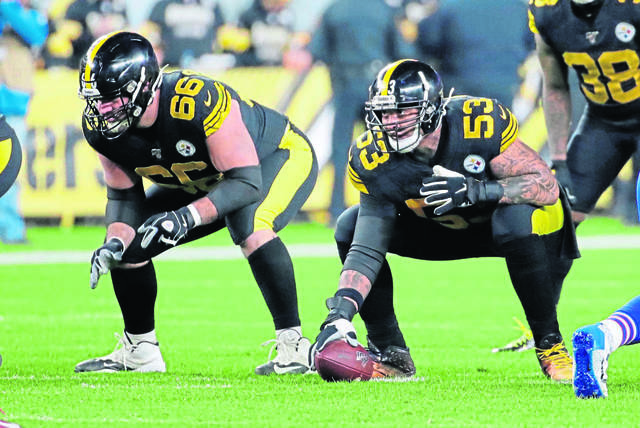 The retirement of center Maurkice Pouncey raises an unfortunate reality for this current era of Steelers.

We are witnessing a batch of truly accomplished players who may never get to play in a Super Bowl. And that may dilute their position in the pantheon of Steelers legends.

Pouncey was on a team that got to one, Super Bowl XLV in Dallas his rookie year. Unfortunately, he was injured and could not play in the loss to the Green Bay Packers.

But Pouncey, David DeCastro, Cam Heyward and Le’Veon Bell never played in a Super Bowl while wearing Black and Gold.

Technically, Bell didn’t even play in this most recent Super Bowl with the Kansas City Chiefs. He was dressed but never saw the field.

These are guys who have been multi-time All-Pros and never got to participate in “The Big Game.”

Antonio Brown is on the fringes of this discussion. He participated in Super Bowl XLV as a rookie kick/punt return specialist. But he only caught one pass for one yard.

From his point of view, at least he got a touchdown and a win with the Tampa Bay Buccaneers in this year’s Super Bowl.

Now, consider some of these modern-day Steelers’ resumes and compare them to some other greats that have come and gone.

Pouncey was a three-time, first-team All-Pro. And he appeared twice on the second team. He had nine Pro Bowls, as well as a spot on the NFL All-Decade team for the 2010s. Dermontti Dawson is in the Hall of Fame as part of the Steelers’ famed legacy at the position. He had six All-Pros, seven Pro Bowls and an All-Decade slot for the 1990s.

Guard David DeCastro has three All-Pro lists in his back pocket and six Pro Bowls. If he can rediscover his game at 31 years of age after a rocky 2020, he may be in the same stratosphere as fellow guard Alan Faneca who just got elected to the Hall of Fame earlier this month. Faneca had nine Pro Bowls and eight All-Pros.

Unlike DeCastro, Faneca also had a Super Bowl “Hall of Fame” moment, though, to underscore his greatness. That was the 34 counter pike play that opened up space for Willie Parker’s 75-yard run in Super Bowl XL.

Heyward is up to 58 sacks. That’s now sixth all-time in franchise history (counting L.C. Greenwood’s third-place total of 73.5 before the stat became official).

Although, Greenwood had those four titles in the 1970s. Maybe the better comparisons are to Aaron Smith and Brett Keisel, who are sainted names from the mid-2000s teams because they earned two rings apiece. But they only had one Pro Bowl each.

As for Bell, only three Steelers running backs have more rushing yards in Steelers history than him, despite being on the team for just five short years. The only guys with more? Franco Harris, Jerome Bettis and Parker.

Sure. There have been some other Steelers greats who have never advanced to a Super Bowl. Tunch Ilkin, Eric Green and Barry Foster racked up Pro Bowl berths. Gary Anderson is the organization’s all-time points leader. He left after the 1994 season and missed out on the Super Bowl by a year.

Louis Lipps and Mike Merriweather combined for five All-Pro/All NFL awards. They got as close as the 1984 AFC Championship Game but never beyond that.

Before Pittsburgh’s Super Bowl years, we should remember Jack Butler, John Henry Johnson and Ernie Stautner. All three are Hall of Famers. All three too often register in the “others receiving votes” category when it comes to most all-time Steelers depth charts.

How come? Well, those three played most of their years before the Steelers ever had a chance of winning the Super Bowl or before it was even invented. At least Stautner eventually got two rings on Tom Landry’s coaching staff with the Dallas Cowboys.

Pouncey may get into the Hall of Fame anyway. DeCastro, Bell and Heyward? Doubtful. Pouncey is even a question mark because the standard for any Steeler who retired post-1974 seems to be: “Did he play in a Super Bowl or not?”

Individually, all of these guys have careers worth enshrining somewhere. If not Canton, then the Hall of Honor. Or at least a glossy photo on a wall in the South Side headquarters.

But guys such as Lipps and Merriweather and Stautner don’t come up in barstool conversations as often as they should. And maybe these guys won’t either because of that one gaping line absent on their Wikipedia pages.

To say nothing of current Steelers who are just getting started, such as T.J. Watt and Minkah Fitzpatrick. And didn’t Joe Haden leave the Cleveland Browns thinking for sure he’d get to Super Sunday in Pittsburgh eventually?

None of them should hold their breath.

In a city that tends to measure greatness based on how many Super Bowls you won, not how close you came to reaching one, it’s going to be sad if some of these individually fantastic careers are underrated in Steelers history because of this most recent decade of coming up short.

Tim Benz is a Tribune-Review staff writer. You can contact Tim at tbenz@triblive.com or via Twitter. All tweets could be reposted. All emails are subject to publication unless specified otherwise.