This is how much climate change is hurting retirement savings 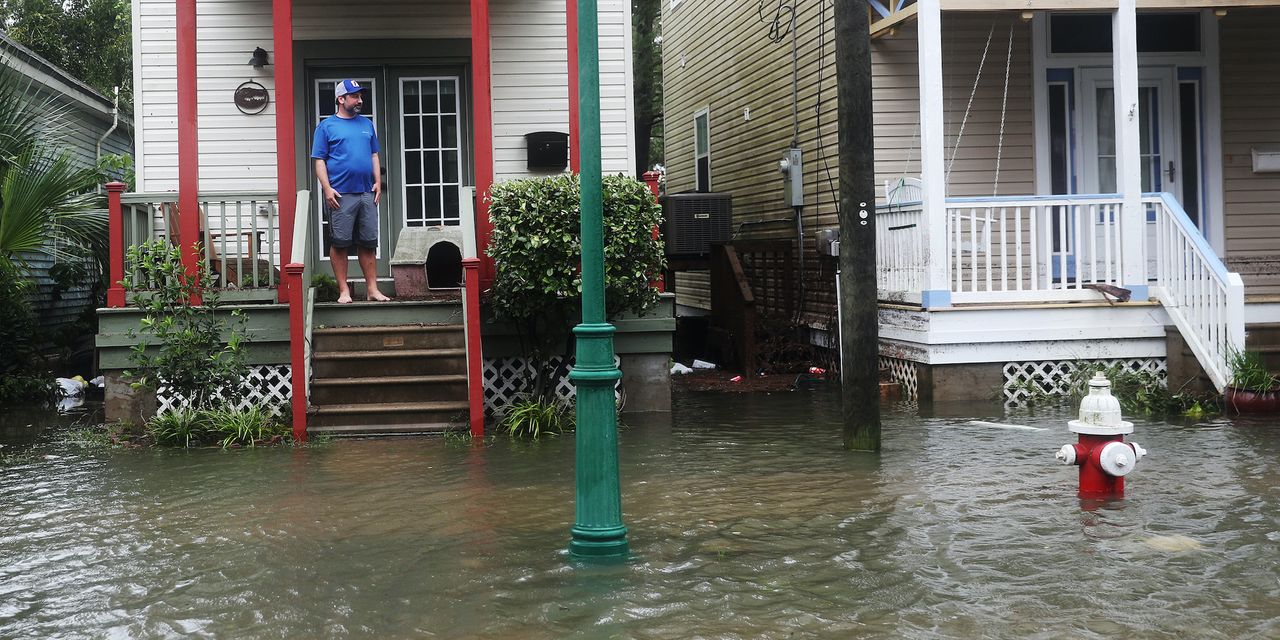 The last few hurricane seasons have been white-knuckle events for Reed Galin, which might seem odd since the 67-year-old media producer lives just outside Nashville, Tennessee. Not exactly “Hurricane Alley.” Galin’s concern was for his parents, both living at the time in Juno Beach, Fla.

His father, Sherman, was a particular worry; he was in his early 90s and bedridden in an elder care facility less than a mile from the Atlantic coast. Within a year’s time, Galin watched three hurricanes (Dorian, Isaias and Sally) take early aim at Florida’s East Coast, knowing that any of them could force an evacuation of his dad’s facility.

“I can actually see, and believe, climate change happening,” says Galin, “but it’s not an imminent threat to me in the same way that it is when you start talking about having to move my parents out of their situation to avoid a hurricane. Because there may be physical devastation in the place where they live and what that might mean in their lives.”

“
“We have had people tell us that they don’t think they’ll ever be able to retire because of the flooding that’s happened,”
”

A raft of recent studies are putting a spotlight on the risks to older Americans living in the nation’s flood-prone coastal zones, especially on the low-lying East and Gulf Coasts.

The proportion of the U.S. population over 55 living in coastal areas has increased more than 80% since 1970. That makes sense, since coastal communities — especially those in warmer climes — have long been popular retirement destinations. But these are also among the most vulnerable areas to both nuisance and catastrophic flooding, as warming temperatures and melting polar ice cause sea levels to rise.

Also see: How climate change is ruining retirement across America

Some 40 elder care facilities in Florida alone are already exposed to occasional flood risk, a number that some analysts think could reach 70 in the next 30 years — precisely when people currently in their 50s and 60s might reside there.

Galin was lucky. None of those storms actually forced an evacuation of his parents, a potentially life-threatening event not just for residents of elder care communities but also those living independently. According to a recent report from the Climate Central research organization, 12% of people over 80 wouldn’t be able to evacuate in an emergency without help. (You can use Climate Central’s interactive “Risk Finder” online tool to assess your vulnerability in the face of climate change threats.)

“In some hurricanes, the difficulties and stresses of moving vulnerable older adults has caused more deaths than the actual storms,” the Climate Central report noted. As Next Avenue has reported, even routine flooding can temporarily cut off residents from hospitals and other vital services.

But as families weigh these direct threats from extreme weather and rising seas, another aspect of coastal risk is coming into sharper focus: the potential hit to retirement finances. “The people who we’ve looked at have seen significant impacts to their savings,” says Sieren Ernst, co-founder of the Amherst, Mass.-based Climate Cost Project (CCP), which just released a study of the financial impacts on “flood survivors” in Horry County, S.C., home to the retirement magnet of Myrtle Beach.

Also read: We want to retire in a place with a low cost of living, no humidity and no colder than 50 degrees — I freeze easily! Where should we go?

This area has seen its population spike by more than a third in the last decade, mostly driven by retirees from northern states. Since 2016, the county has found itself in the crosshairs of two hurricanes and suffered wind and rain damage from at least eight other major storms, racking up $136 million in costs to the federal flood insurance program.

CCP surveyed 127 households in Horry County and found that more than 8 in 10 had been flooded two or more times in the last five years. Yet a third of the surveyed homes were in flood zones designated as “low risk” by the Federal Emergency Management Agency (FEMA), which manages the taxpayer-subsidized flood insurance program.

Ernst says many people exposed to flood risk lack federal flood insurance. Even if they have such policies, they often find that many flood-related expenses aren’t covered.

The effects on home values and home equity

“They have to dig into savings; many of them go into debt,” says Ernst. “A lot of people take on credit card debt and then the value of the home, which is where people have most of their equity, declines.”

Older homeowners may be especially vulnerable in coming years, eventually having to forego flood insurance as the ever-increasing effects of climate breakdown and extreme weather force premiums to rise.

In early April 2021, FEMA restructured its flood insurance program, tying premiums — for the first time — to home values as well as elevation. This change will mean significant jumps in premiums for owners of high-end properties in flood zones, though premiums will also decrease for more than a million homeowners, according to FEMA projections.

Fifteen Horry County households selected for a detailed follow-up CCP survey saw a median decline in home value of 17%. That made moving to escape future flooding events more of a challenge. Overall home values in the county, much of which is on higher ground inland, have been rising.

The average loss of wealth from flood events for these residents: $139,146, more than twice the median household income of the respondents.

Even among those who had received assistance from FEMA, the report found that the residents “were still left with significant financial exposure, often depleting savings and/or taking on debt to rebuild a home that was declining in value.”

Although the CCP study was confined to a relatively small number of households in a single South Carolina county, it offers a snapshot of broader impacts already under way from a changing climate.

In 2019, homes exposed to sea level rise nationally were selling for an average of 7% less than equivalent houses, according to research from the University of Colorado and Penn State University.

“Without serious change, both at the federal level and local governments, you’re going to end up with tens of thousands or hundreds of thousands of people along the eastern coast whose finances and livelihoods are damaged by repeat flooding,” says Ernst.

Some preretirees are taking note.

“We have had people tell us that they don’t think they’ll ever be able to retire because of the flooding that’s happened,” says Ernst.

Read next: We get $2,470 a month from Social Security and want a warm, friendly city near the ocean. Where should we retire?

Galin’s chronic worries about his parents in Florida due to flooding have sharpened his perspective on climate chaos.

“It took the overarching concept of climate change and honed it down to real life, right now,” he reflects. “When a situation like that is occurring, you feel like, well, now it has a very specific pressure point in my life. And I’m worried about what this means to my parents — not my property, not my convenience, my parents.”

Craig Miller’s career in broadcasting and journalism spans more than 40 years, though since 2008, his focus has been on tracking climate science and policy. Miller launched and edited the award-winning Climate Watch multimedia initiative for KQED in San Francisco, where he remained a science editor until August of 2019. Prior to KQED, he spent two decades as a television reporter and documentary producer at major-market stations, as well as CNN and MSNBC. When he’s not working, his favorite spot is in his kayak on a scenic river or mountain lake.

This article is reprinted by permission from NextAvenue.org, © 2021 Twin Cities Public Television, Inc. All rights reserved.

More from Next Avenue: