With a mission to help middle-American laborers achieve retirement through employer-sponsored savings plans, Arends has focused his firm’s expansion not on affluent metropolitan hubs but on towns with high concentrations of plan participants. In addition to Pella, that strategy has led to offices in Lake Mills, Iowa, Eden Prairie, Minnesota, and Golden, Colorado – not exactly traditional advisor country.

‘We’ve identified something that is missing in the wealth management world – that is, attention to people other than the uber-rich, the wealthiest 1% of the American population,’ Arends says. ‘They desperately need our help.’

So far, that philosophy has worked out for him. Now approaching $5bn in qualified retirement plans and managing $1bn in its rapidly growing private wealth business, Arends sees an opportunity to turn his one-time boutique family-run shop in lakeside Albert Lea, Minnesota, into a national leader.

While Arends was a law student at Washington University in St. Louis School of Law, he’d interned with the family business, Independent Service Co., a pension-planning firm his father formed with a partner after the passage of the Employee Retirement Income Security Act (ERISA) of 1974. The partners would go on the road visiting local companies in ‘small town USA,’ training them on how to install defined benefit pension plans for their employees.

In 1984, around the time Arends graduated from law school, his father and his partner went through an amicable business divorce. Each formed their own pension-planning firms in Albert Lea, less than 10 miles from Iowa’s corn country. Arends’ father rebranded his practice as Arends & Associates.

In a time of need for the company, Arends stepped in to help out. It was the mid-1980s and Congress had just recently enacted three major amendments to ERISA.

‘My immediate job when I joined was to amend all the qualified retirement plan documents. Every one of them. It was more than dozens, less than hundreds,’ he says. ’I never looked back. I got immediate contact with not only business owners but their employees. If I’d practiced law in a big firm in Des Moines or downtown Minneapolis, I would’ve been captive to a cube, creating wills and trusts and contracts forever. That is grinding work.’

He eventually joined his father on the road, learning how to talk to participants and be a consultant. As Arends became the primary contact for more client relationships, his father was able to focus on marketing and growing the client base.

Then what started as a gradual shift in the retirement landscape gained speed and ultimately ‘changed everything.’

401(k) plans had begun to spread like wildfire. By the 1990s, 401(k)s, initially meant to be a supplement to defined benefit plans, had overtaken pensions as the retirement savings vehicle of choice for most employers, marking a nationwide transition from defined benefit to defined contribution structures – a shift that still defines the employee benefits landscape 30 years later.

‘My father taught me early that disruption is good for business as long as you recognize it and ask yourself, “how do I capitalize on this?”’ Arends says.

He noticed that the proliferation of 401(k)s presented an opportunity to provide a new service: advice.

‘It changed our business from being employer-centric to being participant-centric,’ he says. ‘Not only did we have to teach them about making contributions, which they’d never done before, we then had to teach them how to invest.’

Arends & Associates’ client base expanded dramatically. There was pressure on employers to provide a retirement program, Arends says, and 401(k)s presented a way for them to do that while offloading some risk and responsibility to the employees. Education on 401(k)s was common at the time, but advising on them was not, he adds.

‘There was this false belief that you couldn’t legally give advice. That was wrong. You could give advice, you just had to be unconflicted,’ Arends says.

Being an early adopter in this space paid off.

Arends recalls taking a meeting off a cold call with one employer – a manufacturer in Pella, Iowa, with a few hundred employees at the time – to install 401(k) provisions on the firm’s roughly $11m profit-sharing plan. That client is Arends’ biggest today, with a plan just shy of $500m covering about 4,000 employees. Serving that growing participant pool led Arends to open an office in Pella, population 11,000. His firm has since added to its book a few more local manufacturers and the town hospital.

‘I think if you asked my teammates, “What is Brad’s biggest contribution to the firm?” They’d say vision. Not just looking at “how do we do this today?” but “where is this headed?”’ he says.

‘You’re kind of born with that. It was something that just was natural to me. My dad was like that. We’re not afraid of change.’

Arends’ comfortability with change has allowed him to be proactive in rejigging his business model to match the needs of the market.

He and his father were longtime members of an industry thinktank and professional network called Retirement Administrators and Designers of America (RADA). When technology emerged in the early 1990s that enabled plan advisors to stop doing balance-forward recordkeeping on a quarterly basis and start doing daily valuations, Arends knew change was on the horizon.

Arends’ father was slowing down. For practical purposes, Arends had taken the reins on the family business.

He made the decision alongside three friendlies from RADA to form a new business entity, Alliance Benefit Group, comprising their four businesses. For Arends, the rebrand marked the bittersweet end of an era – his firm no longer carried the family name.

For a while, things worked well. Alliance Benefit Group grew into a leading retirement plan recordkeeper, administrator, and consultant, advising on about 20,000 plans with a combined $86bn in assets. The firm sprouted 17 member offices from Tacoma, Washington, to Miami, Florida.

However, in the mid-2010s, the goalposts moved again. Industry titans like Empower, Fidelity, and Principal were enjoying exponential growth by consolidation. Technology upgrades that would’ve been necessary to compete with them were prohibitively expensive. Arends again recognized it was time to move differently.

In 2015, he sold off the firm’s bundled third-party administrator and recordkeeper to focus on what he believed to be the future of the retirement advice business: financial planning.

‘We’d created a big recordkeeper. We were a really complicated organization,’ Arends says. ‘When we sold the recordkeeping side, in my mind, I thought of it almost as chapter two. Now, can we create a national footprint as an advisor?’

He and his brother Grant, the two owners of the remaining advisory business, drew up a new business plan and marketing strategy and rebranded as Intellicents. The mission? To profitably bring planning services to the same downstream market of mid-country workers he’d been serving since the 1980s.

For a crew of 401(k) consultants, that presented a unique challenge.

‘We were really good at investing but we definitely didn’t know the financial planning side of it. We didn’t even know what the service model needed to be. We didn’t have a single CFP on staff,’ he says. ‘I had the vision, but I didn’t know how to do it. We had to buy that know-how.’

Four years ago, after a few hires didn’t pan out, Arends ‘struck gold’ by bringing on a father-and-son-run group of fiduciaries that were ‘extremely profitable’ despite having an average account size of just $300,000.

‘They had total revenue of $1.5m and total fixed expenses of $300,000,’ Arends says. ‘We said, “You’ve got to build this. We want to put your service system in place in all these locations we want to provide private wealth.”’

‘We’ll end this year close to $6bn in qualified retirement plans, but I’ll tell you what the fastest-growing part of our firm is: private wealth. It’ll take a while for our AUM to surpass what’s in the 401(k), but in terms of revenue, it’s far more profitable,’ Arends says. ‘My only regret is I didn’t do this sooner.’ 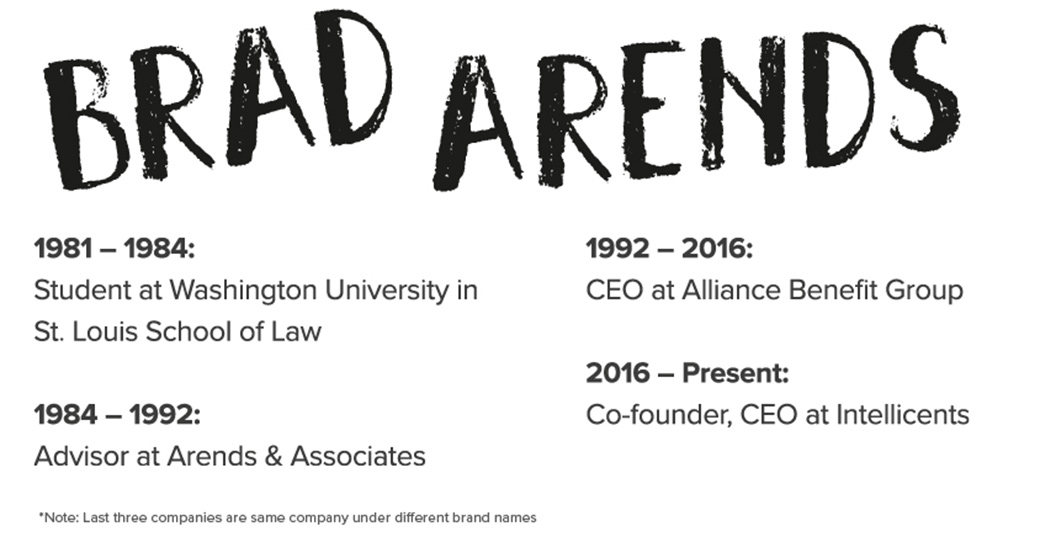 Today, Arends’ vision is locked onto one concept: financial planning as an employee benefit.

He referred to a study his firm conducted with the client in Pella that found if all plan participants maintained the exact same contributions and investment strategy over the course of their careers, only 19% would be able to afford their existing standard of living when they retired.

That information convinced the client, which is an equipment manufacturer, to approve auto-enrollment and auto-escalation services, as well as a comprehensive employee education campaign run by the firm’s consultants. Both the participation rate and the number of participants maxing out their matchable contributions skyrocketed.

In May, Arends persuaded the Pella client to take the plunge and add financial planning to its benefits package. That month, Intellicents provided financial plans to all 4,000 of that company’s employees.

For that to become standard practice – and ‘to really push the industry forward’ – planning will need to be blessed by the Internal Revenue Code to carry similar tax benefits to health or disability insurance. But even without those advantages, Arends is yet again working to position Intellicents as an early adopter and market leader.

‘To follow through on that, you’ve got to get people and technology and that’s very intimidating to a lot of people. But we had built things in the past. We’re not settlers; we’re pioneers,’ he says.

Another trend Arends is mindful of is the consolidation and convergence of retirement advice, private wealth, and group insurance.

‘Our model of being in all three of those is going to expand. There are already people doing it, like OneDigital, HUB, even Captrust. It’s better for the employer and employee because they’ll have one resource for all their benefits and personal financial questions,’ he said, mentioning massive acquisition campaigns by all three companies.

Intellicents hopes to become more acquisitive as well, though in a slightly downstream market.

‘Can we compete with OneDigital or HUB on those $5m to $10m shops? No. But there’s plenty of advisory firms out there with $500,000 to $2m, and quite frankly, HUB and OneDigital are stepping over those right now. That leaves room for people like me,’ Arends says.

For a man whose career has been focused on retirement, the questions are inevitable. At 62 years old, and with one of his three daughters now working alongside him at Intellicents, Arends is getting used to people asking him how much longer he’s going to stay in the game.

‘If I didn’t have this just cause, I would probably retire today,’ he says. ‘It’s not a money issue for me. I want to help solve a problem. I plan on [working for] at least another 10 years.’