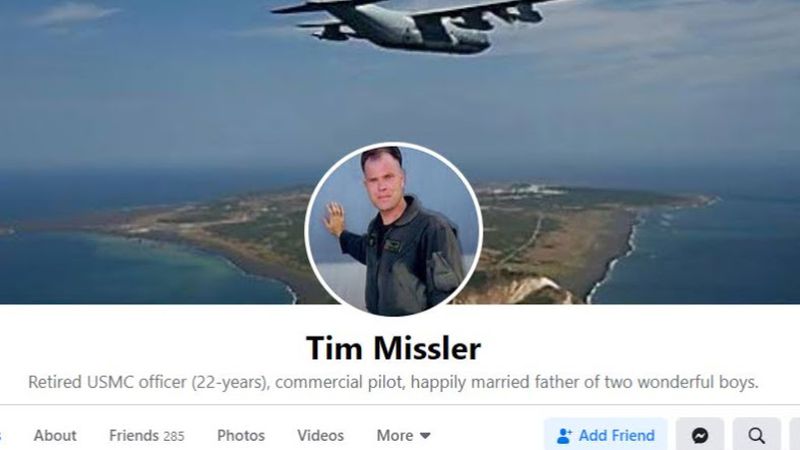 LITHIA — The son of a retired Marine officer told deputies he shot his father during an argument in the family’s FishHawk Ranch home two days before Thanksgiving, according to a newly released court document.

Brody Missler, 23, called 911 on Nov. 24 and said he had just shot his father Timothy Missler because “he was being aggressive and getting a gun,” according to a search warrant affidavit released by the Hillsborough Clerk of the Circuit Court’s office on Wednesday.

Timothy Missler, 50, was dead when deputies arrived at the home in the 15000 block of Starling Water Dr., the affidavit says.

Whether Brody Missler will face criminal charges in the shooting remains undetermined. The Hillsborough County State Attorney’s Office expects to get the case from the Sheriff’s Office soon, said state attorney spokesman Grayson Kamm. At that point, the state attorney’s homicide committee will review the investigation and make a recommendation to State Attorney Andrew Warren, Kamm said.

However, Brody’s attorney told the Tampa Bay Times that the 23-year-old acted in self-defense.

”Brody was not arrested and has not been charged with any crime,” said a statement from attorney Anthony Rickman. “He acted in self-defense after he was battered, assaulted, and threatened with a firearm, which was recovered by law enforcement.”

The attorney said Brody is “extremely close” to his family and notes that he has no criminal history. Brody excelled at school, graduated from the University of South Florida and is preparing for a career in the military. The attorney said his client is cooperating with investigators. Brody declined to comment on Wednesday.

“The facts and evidence show that this shooting was justified and was within the bounds of Florida Law,” Rickman said.

The affidavit answers some questions that have lingered since the Hillsborough County Sheriff’s Office first reported the shooting.

At the time, the Sheriff’s Office said the caller, a man in his 20s, told dispatchers that a male relative had threatened him with a gun. The caller said he armed himself because he was in fear for his life then shot the relative a number of times. The victim, a man in his 50s, died at the scene.

Evidence at the time indicated Timothy Missler was the victim in the case.

Deputies obtained search warrants on the day of the shooting for the home and for a 2014 Audio. According to the warrant affidavit, Brody Missler called 911 shortly before 7 p.m. that day and said he shot his father.

Brody Missler told investigators that before the shooting, his father shoved him and went to a cabinet to retrieve a gun, according to the affidavit.

Brody Missler said he placed the gun on a table and had a holster on his hip. During the 911 call, he used another phone to call his mother and told her he “just shot dad,” according to the affidavit.

Deputies arrived to find Brody Missler in front of the house and detained him. Inside, deputies found Timothy Missler’s body on the floor in the kitchen/dining room area. He had what appeared to be a gunshot wound in the back of his head.

Deputies also found a handgun on the floor near Timothy Missler’s feet and a second handgun on a table in the house.

The warrant affidavit written by Detective Christopher Cutler said deputies were investigating the shooting as a possible murder.

According to his Facebook and LinkedIn pages, Timothy Missler was a retired lieutenant colonel who served in the Marines for 22 years, retiring in 2016, and worked as an instructor pilot for L3 Technologies.

From 2014 to 2016, he worked in Tampa at Marine Corps Central Command, or ­MARCENT, according to his LinkedIn profile. Among his duties was to supervise “three top secret and secret operational and concept supporting plans to Central Command’s … series campaign plans,” the profile says. The command is located at Tampa’s MacDill Air Force Base

His Facebook page, which appears to have been deactivated, described him as a “happily married father of two wonderful boys.”