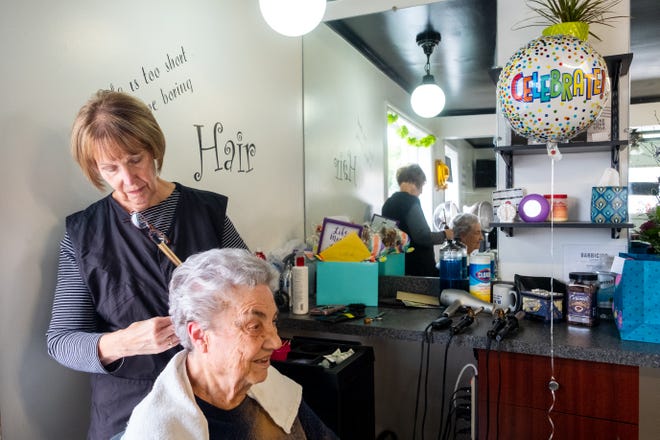 Marine City hairdresser Susan Carrier has made many friends while standing behind the chair for 50 years.

Her customers and coworkers became like family at Shear Style in Marine City. While she knows it’s time to retire, she will miss all the people she’s come to know.

The 69-year-old celebrated her last day of work Thursday.

One of the most enjoyable parts of Carrier’s career has been working with people one-on-one, she said.

“Every single one of the women I’ve worked with and all the people I’ve worked on, they become like friends. And I got to know a lot of different people. They help me through my things, I help them. I know their kids’ names and about their lives,” Carrier said. “I really enjoy people one-on-one and whether it’s a good or sad occasion, we come together, we really do.”

Carrier got her first job at a salon in Marine City at the age of 19, at her friend’s insistence.

“I was going into my senior year of high school and my very good friend came over to the house and said guess what we’re going to do? And she was a good friend that never led me wrong and she said, we’re going to beauty school,” Carrier said. “So I did.”

She worked in three salons in Marine City and Algonac before coming to Shear Style almost 42 years ago.

Carrier said the secret to her longevity is to take everything one day at a time.

She said she was especially close with her boss of more than 30 years at Shear Style, Linda Miller. Miller died five years ago this month. Carrier said she coped with her death with the help of her coworkers.

“We comforted each other. She treated each of us as if we were the most special person ever . . . She was just a great mentor,” Carrier said.

“A lot of the hairdressers don’t do roller sets anymore, and she’s one of the last that truly knows how to do a roller set,” Sanger said.

They said Carrier always has a smile on her face and has a great sense of humor.

Carrier’s plans for retirement include traveling and spending time with family and friends. But first, she will start with a simple cup of coffee.

“My first day (of retirement I want to just sit in the living room and sit and drink my coffee as long as I want instead of running out the door,” she said.