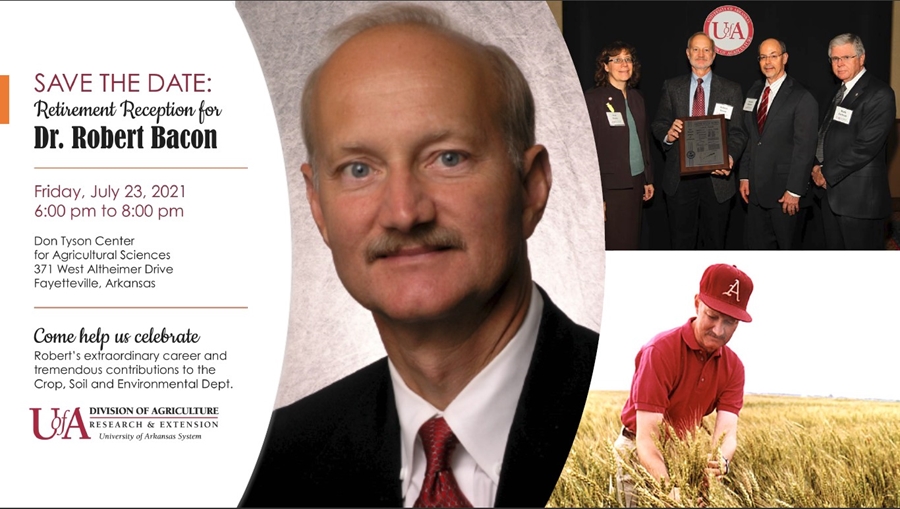 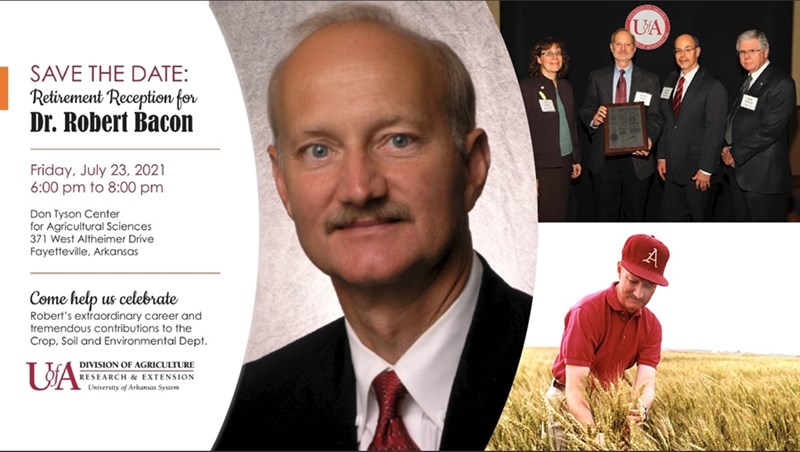 Robert Bacon, who retired from the University of Arkansas and the U of A System Division of Agriculture in January, is being honored at a reception on Friday, July 23, at the Don Tyson Center for Agricultural Sciences.

The reception, which is open to the campus community, is from 6-8 p.m. RSVP to Carri Scott at carrilulu77@gmail.com by July 15.

Bacon, who earned his bachelor’s and master’s degrees from the U of A, joined the Arkansas Agricultural Experiment Station as a wheat breeder in 1984. In addition to breeding wheat, oats and canola, he carried a heavy teaching load.

About the Dale Bumpers College of Agricultural, Food and Life Sciences: Bumpers College provides life-changing opportunities to position and prepare graduates who will be leaders in the businesses associated with foods, family, the environment, agriculture, sustainability and human quality of life; and who will be first-choice candidates of employers looking for leaders, innovators, policy makers and entrepreneurs. The college is named for Dale Bumpers, former Arkansas governor and longtime U.S. senator who made the state prominent in national and international agriculture. For more information about Bumpers College, visit our website, and follow us on Twitter at @BumpersCollege and Instagram at BumpersCollege.

About the University of Arkansas: As Arkansas’ flagship institution, the U of A provides an internationally competitive education in more than 200 academic programs. Founded in 1871, the U of A contributes more than $2.2 billion to Arkansas’ economy through the teaching of new knowledge and skills, entrepreneurship and job development, discovery through research and creative activity while also providing training for professional disciplines. The Carnegie Foundation classifies the U of A among the top 3% of U.S. colleges and universities with the highest level of research activity. U.S. News & World Report ranks the U of A among the top public universities in the nation. See how the U of A works to build a better world at Arkansas Research News.