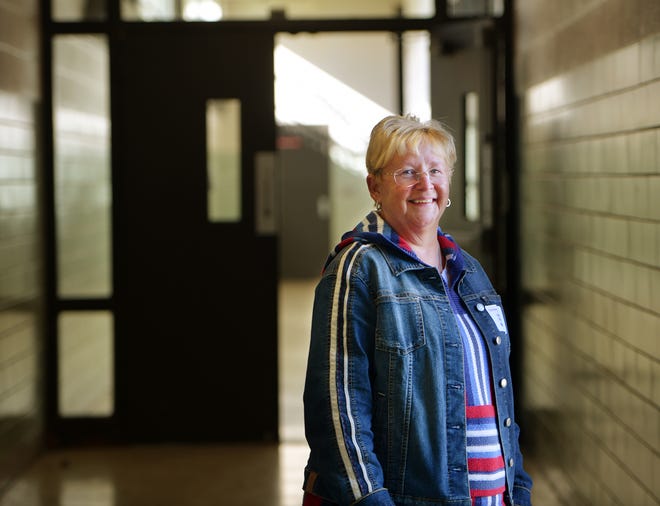 WORCESTER – Retirement for some means golfing, getting a golden tan, traveling to an exotic spot or savoring an expensive bottle of wine

Susan M. Ledoux may be doing all of those things — plus, one more activity in her retirement. And this one comes with a civic bent.

Seated at a table with a laptop at hand, Ledoux, 62, had an official Worcester Election Day sticker on her shirt. It displayed her name and an official title – warden.

It’s an honored position because warden is the person who leads the crew that ensures the votes are properly taken, tabulated and safely processed.

The name Ledoux should sound familiar to City Hall watchers because she worked for the city for 37 years, the last four as city clerk before her retirement in March 2020.

It’s the same lesson – and skill – she applied at Burncoat High Tuesday.

“Customer service is the key to everything,” Ledoux said. “Make sure the voters are taken care of, and go through the process without any interference.”

And what made Tuesday “kind of cool,” Ledoux said, is that she was warden in the same school she graduated from 44 years ago – Burncoat High School Class of 1977.

When Ledoux said goodbye to City Hall for good last year, she requested to incoming City Clerk Nikolin Vangjeli that he consider her for a position as a poll worker.

It happened and Ledoux has worked each election day since retirement.

“I’m a poll worker, just like everyone else. I just have a little more experience,” she said.

Being an Election Day warden is not a huge leap for Ledoux.

When she turned 18, her late mother, Martha Bates, approached then City Clerk Robert J. O’Keefe and signed her daughter up to be a poll worker. For the next couple years, Ledoux worked the polls, but not with her mother, who was poll warden at Forest Grove Middle School.

After college, Ledoux joined the ranks of Worcester’s city employees and that means her days as a poll worker were over. City employees aren’t allowed to work the polls.

But now that she’s retired, it’s back to the business of Election Day poll work for Ledoux.

Standing in a hallway outside the Burncoat High gym, Ledoux put her fingers under her shirt at collar level and pulled out a necklace she wore. Attached was a “vote” pendant that commemorated the 100th anniversary of the ratification of the 19th Amendment to the U.S. Constitution that gave women the right to vote.

A retirement gift from Ledoux’ staff in the city clerks office.

Then Ledoux matter-of-factly put a proverbial bow on her day at Burncoat High.