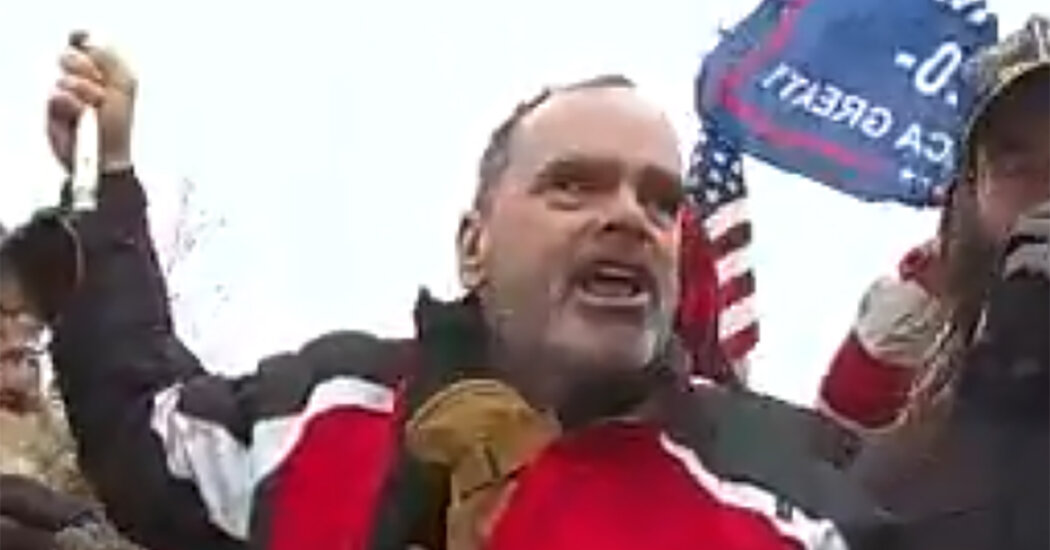 A retired New York police officer who once was part of the security detail at City Hall was charged on Tuesday with assaulting a police officer with a metal flagpole during the pro-Trump riot at the Capitol on Jan. 6.

The former officer, Thomas Webster, served in a New York Police Department unit that provided security for the mayor, Gracie Mansion and City Hall, according to a law enforcement official. He retired from the force in 2011.

Mr. Webster, 54, a former Marine, surrendered to the F.B.I. on Monday and was charged with six counts relating to the attack on an officer from the Metropolitan Police Department in Washington, D.C., and his participation in the violent attempt to stop Congress from certifying the presidential election results.

A federal prosecutor said there were videos of Mr. Webster attacking the Washington officer, first with a metal flagpole that earlier had flown a Marine Corps flag, and then with his bare hands.

According to court documents, after the officer wrestled the flagpole away from Mr. Webster, the former Marine tackled the officer, pinned him to the ground, straddled him and attempted to rip off his face shield and gas mask — an attack that left the officer unable to breathe.

“These videos shock the conscience,” the prosecutor, Benjamin A. Gianforti, said. He said Mr. Webster had shown an utter lack of compassion and had pursued the officer he attacked “like a junkyard dog.” The government did not immediately identify the officer.

Among the most serious of the charges Mr. Webster faces is forcible assault of an officer of the United States with a dangerous weapon, which carries a maximum penalty of 20 years in prison.

Appearing virtually before a federal magistrate judge in White Plains, N.Y., Mr. Webster did not dispute that he appeared in three separate videos of the attack recorded on Jan. 6.

Mr. Webster’s lawyer, James Monroe, said his client had traveled to the Capitol to engage in a lawful protest because he regarded the election as unfair. The lawyer said Mr. Webster had acted in self-defense after the officer punched him.

“He went there as an American citizen to protest, an event that was urged on by our former president — to protest an issue that Tom felt very strongly about,” he said. “That’s protecting the Constitution.”

Mr. Gianforti said that he had seen no evidence on the videos that Mr. Webster had been punched by the officer before the assault.

Mr. Webster, who is married with three children, owns a landscaping business in Florida, N.Y., about 65 miles from New York City, called Semper Fi Landscape and Design — named for the Marine Corps motto. He has never been arrested before.

He turned himself in nearly seven weeks after the riot at the Capitol and close to a month after the F.B.I. posted pictures of him online and said that it was seeking the public’s assistance in identifying him.

In court proceedings Tuesday, the judge, Andrew E. Krause, agreed with the prosecutor that the videos he had seen of Mr. Webster’s actions were shocking.

Judge Krause acknowledged that before Jan. 6, Mr. Webster had been a model citizen and said that he found it to be a difficult case. But he said that Mr. Webster’s “proud and impressive record” as a public servant made the video of his attack on the officer all the more upsetting.

Ultimately, the judge said that the “undercurrent of political hostility” that appeared to have led a person with a previously exemplary life to act in a violent manner had not dissipated, and Mr. Webster could still be considered a threat to public safety. He ordered him held without bail pending another hearing.

In another case connected to the Jan. 6 riot, a Republican Party district leader in Queens — who referred to himself on Facebook as “the Republican messiah” — was charged on Tuesday with being among the rioters who broke into the Capitol.

According to court documents, the district leader, Philip Grillo, was captured on surveillance video entering the Capitol through a broken window. He faces charges of entering a restricted building and interfering with the conduct of government business.

Mr. Grillo, 46, was arrested on Monday at his girlfriend’s home in Glen Oaks, Queens. He was released on $100,000 unsecured bail, with his travel restricted to New York, Long Island and Washington for the purpose of appearing in court.

Mr. Grillo, a proud supporter of Mr. Trump, referred on his Facebook page to the 24th Assembly District where he is the local Republican Party leader as “President Trump’s hometown district.” He appeared virtually before a federal magistrate judge in Brooklyn on Tuesday.

District leaders are unpaid party officials who help register party members, recruit candidates and make sure that their parties are represented at voting sites on Election Day.

Eric Ulrich, a Republican New York City Council member representing a district south of Mr. Grillo’s in Queens, said that he was genuinely shocked and disappointed by the allegations.