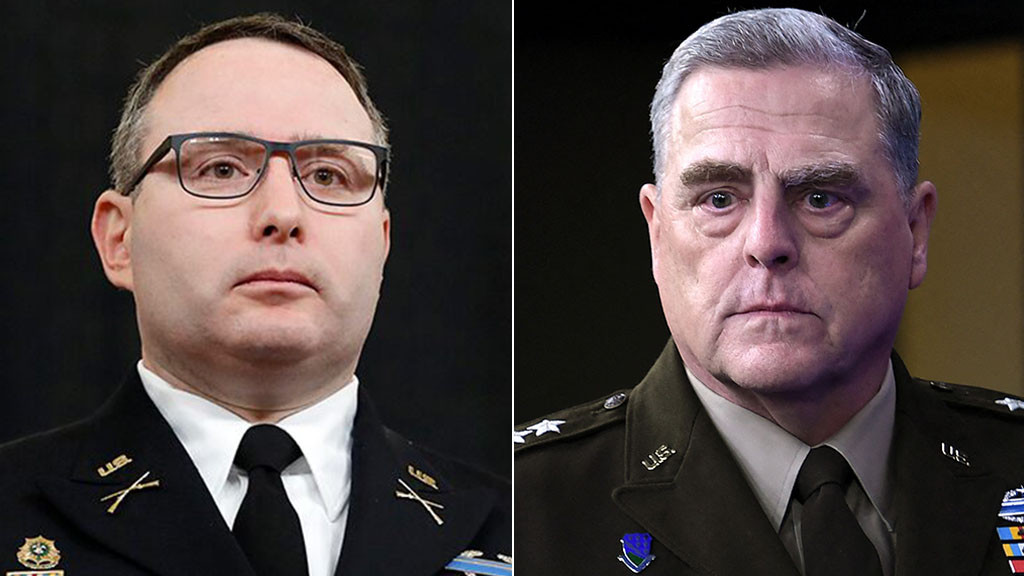 Retired Lt. Col. Alexander Vindman, the star witness in the first impeachment of President Trump, is calling for the resignation of Chairman of the Joint Chiefs of Staff Gen. Mark Milley if the reporting of his secret phone calls with China under the previous administration occurred.

New reporting from the upcoming book “Peril” alleges that Milley reached out to his Chinese counterpart in the final months of the Trump presidency, vowing that he would warn the CCP if the commander in chief launched an attack.

Vindman, an outspoken Trump critic himself, insisted that “if” the reporting is accurate, Milley’s actions went too far.

“If this is true GEN Milley must resign,” Vindman tweeted. “He usurped civilian authority, broke Chain of Command, and violated the sacrosanct principle of civilian control over the military. It’s an extremely dangerous precedent. You can’t simply walk away from that.”

Vindman became a national figure in 2019 when he offered his testimony during the impeachment investigation of President Trump over his conduct with Ukraine and allegations that he was pressuring Ukrainian President Volodymyr Zelensky to investigate the Bidens by withholding aid. Trump was ultimately acquitted by the Senate.

In the new book, authored by Washington Post associate editor Bob Woodward and national political reporter Robert Costa, it is alleged that Milley made two secret phone calls, both to his Chinese counterpart, Gen. Li Zuocheng of the People’s Liberation Army. The book alleges that the phone calls took place prior to the 2020 presidential election on Oct. 30, 2020, and two days after the Jan. 6 Capitol riot, on Jan. 8, 2021.

IMPEACHMENT WITNESS VINDMAN: IF TRUMP HAD BEEN REMOVED, 600,000 AMERICANS WOULDN’T HAVE DIED FROM COVID

According to the book, Milley contacted Zuocheng after he had reviewed intelligence that suggested Chinese officials believed the United States was planning an attack on China amid military exercises in the South China Sea.

“General Li, I want to assure you that the American government is stable and everything is going to be OK,” Milley told him during the first call, the book said. “We are not going to attack or conduct any kinetic operations against you.”

The book, excerpted in the Washington Post, also stated that Milley told Zuocheng that he would warn him in advance should America decide to “attack.”

“Gen. Li, you and I have known each other for now five years. If we’re going to attack, I’m going to call you ahead of time,” Milley added, as reported by the book, “Peril,” which is set to be released next week. “It’s not going to be a surprise.”

The authors of the book also claim Milley contacted Zuocheng a second time to reassure him that the U.S. would not make any type of advances or attack China in any form, as Milley promised, “We are 100% steady. Everything’s fine. But democracy can be sloppy sometimes.”

Those phone calls, according to the book, were never mentioned to Trump, as Milley believed his mental state had declined following the election, something about which he shared his thoughts in a phone call with House Speaker Nancy Pelosi, D-Calif., on Jan. 8, the same day he called Zuocheng the second time. According to Pelosi, she spoke with Milley that day about “available precautions” to prevent Trump from engaging in military action.