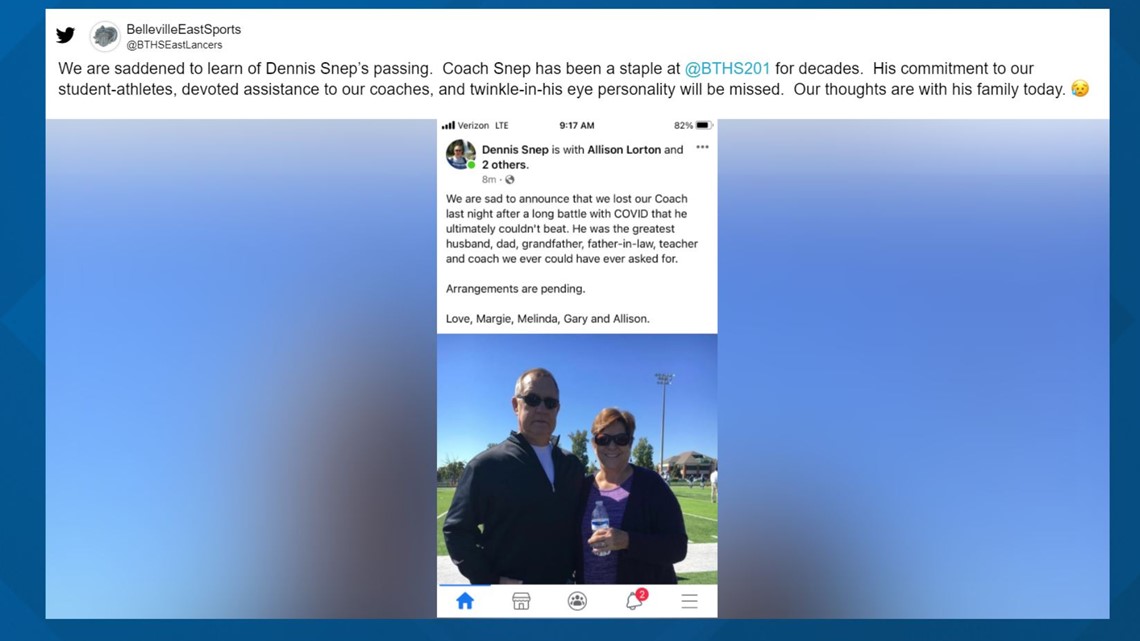 “There’s a handful of people you would say have done as much for high school football in the St. Louis region as Dennis Snep”

He was an assistant coach at Belleville East High School for 30 years and director of athletics from 1995-98, according to his biography. Then in 1999, he moved to Belleville West High School, where he served as a teacher and became the head football coach for the Maroons. He retired in 2007 and was inducted into the St. Louis Metropolitan Football Coaches Association Hall of Fame in 2009.

Belleville East High School Athletic Director Mark Larsen said Snep was a staple around the district for decades, even after his retirement.

“He was always a friend to all of our coaches, just a huge mentor for anybody that came after him,” Larsen said. “And his personality was just awesome. What a very interesting, just unique gentleman and we’re gonna miss him dearly.”

The Belleville East Lancers wrote on Twitter that “His commitment to our students, devoted assistance to our coaches and twinkle-in-his eye personality will be missed.”

We are saddened to learn of Dennis Snep’s passing. Coach Snep has been a staple at @BTHS201 for decades. His commitment to our student-athletes, devoted assistance to our coaches, and twinkle-in-his eye personality will be missed. Our thoughts are with his family today. 😥 pic.twitter.com/Z7JfmUTlip

“Coach Snep was an extremely positive influence to athletes and a mentor to all. He was a true gentleman and will be missed by everyone that knew him,” the Belleville West High School Athletic Department said.

It is with great sadness to announce the passing of former teacher and head football coach, Dennis Snep. Coach Snep was an extremely positive influence to athletes and a mentor to all. He was a true gentleman and will be missed by everyone that knew him. @Maroon_Football pic.twitter.com/VdmQ1xRkD7

After retiring from the school district, Snep joined the Washington University St. Louis football staff. He spent six seasons as an assistant coach under Larry Kindbom. Most recently he served as quality control coordinator in a voluntary, advising role. He also was involved in WashU’s partnership with the Jason Foundation, which is dedicating to preventing youth suicide.

“We are saddened at the passing of Dennis Snep. He was loved in the Washington University family and the St Louis football community,” Kindbom said in an emailed statement to 5 On Your Side. “He was a great teacher; more importantly he was beloved by players, coaches and parents. His work with the Jason Foundation talking about the tough issues of teenage depression and suicide had an impact on St Louis high schools. Our prayers are with his wife Marge and his family.”

It will take big shoes to fill the hole Snep has left behind, Fisher said.

“There’s a handful of people you would say have done as much for high school football in the St. Louis region as Dennis Snep,” Fisher said. “He’s just been an amazing ambassador for the sport in this entire region.”

“Coach Snep dedicated over 40 years of his life to education, and changed many lives during his time with us. He was a mentor to students and staff, he was a leader. He cared deeply about others, and displayed an energy that was both infectious and incredible! Coach Snep will be dearly missed. Our thoughts are with the school community that knew and loved him, his family and his friends as they experience this tragic loss. Our minds and hearts are filled with the many good ways that Coach Snep positively impacted those around him.”

Snep’s family said he died after a lengthy battle with COVID-19.