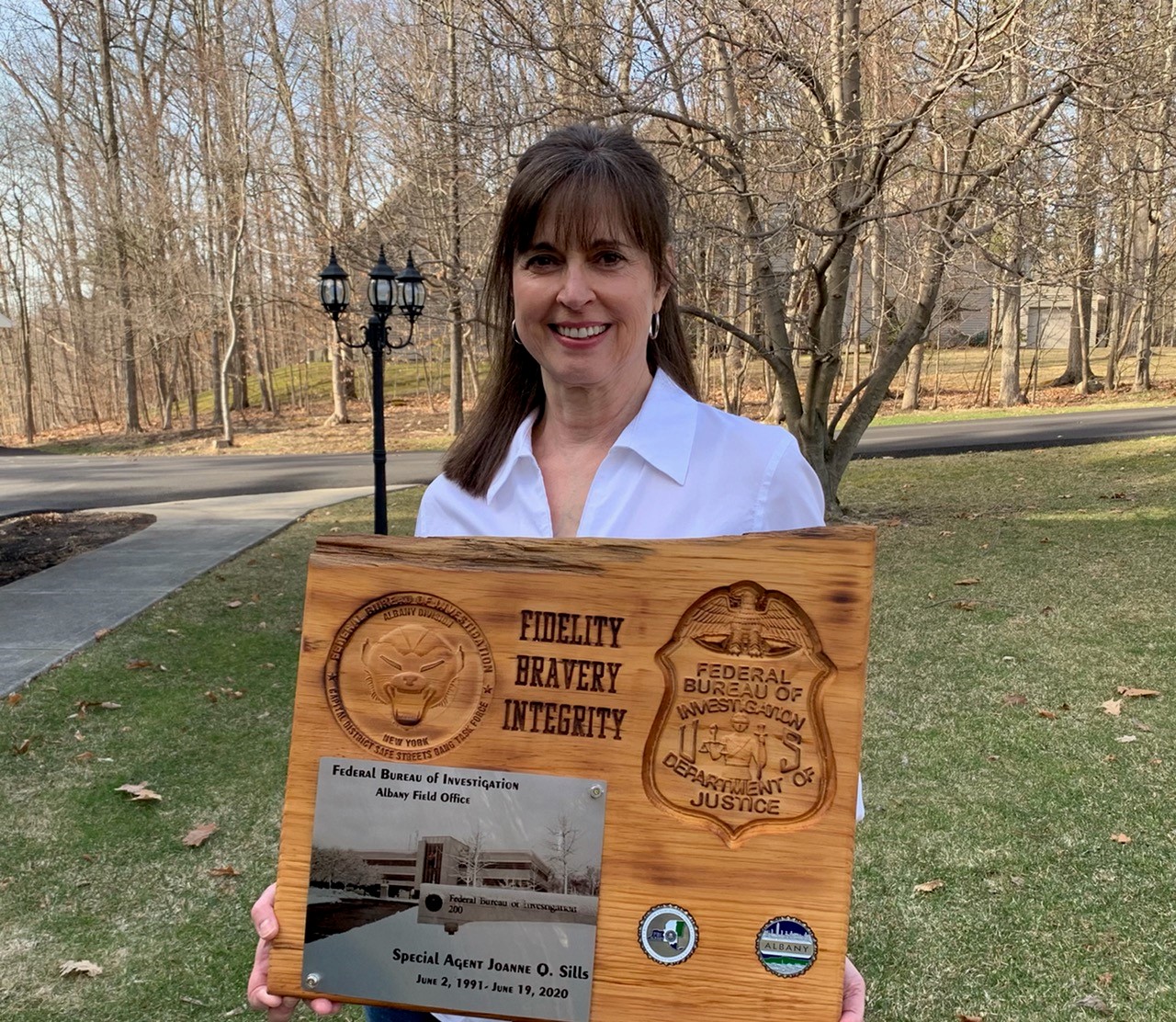 Through three decades of life in the FBI, Sills did it all  – and more – based entirely in Albany, where in 1991 she was one of only a handful of female agents.  Now, as the FBI is looking to increase its number of female agents, Sills stands as a glowing example of a woman who entered the field without any prior law enforcement or military background and thrived for 29 years.

Sills, 58, who retired last June as the COVID-19 pandemic was heating up, urged more women to follow her path. While 44 percent of the FBI’s total workforce is female, only 21 percent of special agents are women.

“I think the special agent position is a wonderful position for anyone, but it’s particularly good for a woman,” Sills told the Times Union.  “You can do so many things in the bureau because there are fewer of us. So you have more opportunities for various assignments, for undercover work or various things that a woman’s perspective brings a lot to.”

Sills said she was able to balance time between her FBI career and family. She and her husband, Albany attorney Eric Sills, have two college-age sons.

Sills, who grew up in Clinton, outside Worcester, Mass., considered teaching but was unsure what career she wanted. Then a cousin who worked in the FBI recommended it as a career path. Sills entertained it, thinking she might be qualified for a support-type position.  Sills called a special agent based in Worcester, where the FBI’s Boston location had a satellite office.

“I spoke to him about various positions in the bureau,” Sills recalled. “He said, ‘Are you interested in the agent position?’”

Sills was intrigued – well, until the agent mentioned that the job required the need to carry a weapon. Sills had never even held one.

“Initially, I said, ‘Oh brother, I could never do that,’” Sills told the Times Union. She went home, thought about it and decided she could learn how to use a gun, if need be.  And Sills applied to the FBI.

At the time, however, the FBI had a hiring freeze. So Sills put the idea on a back burner. Sills, who earned a degree in psychology from Worcester State College, was working at Harvard Business School and studying American history at Harvard University Extension School, a continuing education program.

In 1991, the FBI sent Sills a letter asking her if she was still interested in joining. Sills joined and underwent 16 weeks of training in Quantico, Va. She began her career where it ended: Albany, her top choice given its proximity to her home. At the time, the FBI field office – now on McCarty Avenue — was on the top floor of the James T. Foley U.S. Courthouse on Broadway. Only a half-dozen or so women worked in the entire Albany division.

In 1991, agents did not get computers or cell phones. Sills shared a desk phone with a co-worker. Agents would send recordings of interviews on cassette tapes to be typed up. Sills, initially assigned to a squad handling bank robberies, extortion, kidnappings and drug offenses, was hooked.

Andrew Vale, the top FBI agent in the Albany office between 2013 and 2017, when he moved on to a high-ranking position with the bureau in Washington D.C., praised Sills’ performance.

“Joanne was an accomplished agent who could be counted on to handle very complex and sensitive investigations,” said Vale, who was previously in the Albany field office from 2006 to 2011. He is now retired.  “She was always thorough, never leaving a stone unturned. Joanne’s documentation of her investigative efforts was some of the best I had seen in my 28 years with the FBI.”

He said Sills’ work with the evidence response team, where she assisted processing crime scenes, was “impeccable and set the standard for other members of the team.  Joanne was always willing to volunteer for any assignment.  She was true team player.”

Sills, who worked in almost every squad in her office over the years, casually rattled off cases, including an assignment to watch Wanda Kaczynski, the mother of Ted Kaczynski, the notorious “Unabomber,” the man who mailed bombs to victims over an 18-year span, killing three people and injuring 24. In 1996, as a multi-day media circus was to envelope the Schenectady home where the bomber’s brother, David, and his wife, Linda Patrik, were staying, Sills was asked to watch Wanda Kaczynski in a Schenectady-area apartment. They spent a few days together.

“We spent so many hours just talking and drinking tea and she told me about so many things in her life,” said Sills. “It was just interesting to have that perspective, that unique chance to sit with the mother of the Unabomber.”

That same year, a task force was hunting a man known as the “Pincocchio bandit.” He had hit 15 banks, including locations in Schenectady,Troy and Colonie. After a heist in East Greenbush in late 1996, a sharp-eyed state trooper, Scott V. Schriner, spotted a man fitting the robber’s description sitting in a car in Schodack. He questioned the suspect —  Daniel Finbarr Coleman of West Coxsackie, a native of Ireland —   who told him he was headed to a local high school for his child’s sports event.

Sills and another agent, in turn, went to the high school. Coleman was headed to his car when they arrived.

“We approached him and started talking with him — and he confessed to having just robbed that bank,” Sills said. “We asked if we could look in his vehicle. He said, ‘Sure.’ We did and we found all the cash from the banks stuffed under the driver’s seat… had we been two minutes late, we never would have caught him.”

One particularly tough case, she said, was her role on of the evidence response team following the July 17, 1996 explosion of TWA Flight 800 off Long Island, which killed 230 people bound for Paris. Initially, investigators were not sure if it was an accident or terrorism. She said agents sifted through items pulled from the ocean looking for evidence of a crime.

“It was just so personal for us because we were seeing children’s stuffed animals or a teenager’s diary or clothing and travel guides and medications and all things that every one of us would be packing for a trip to Europe,” Sills said. “It was really a very profound experience and it was a difficult responsibility. It was really heartbreaking and I don’t think I will ever forget that.”

The crash was later determined to be caused by a spark in the center fuel tank that led to the explosion.

One of the last cases Sill worked involved the recovery of a Jewish family’s painting seized by Adolf Hitler’s regime. The family of the painting’s owner, publisher Rudolf Mosse, fled Germany in 1933, and had to leave behind their vast art collection, including the painting. A year later, an unknown buyer purchased it. Five months later, it turned up in an art gallery in New York City. Bartlett Arkell, co-founder and president of the Beechnut Packing Co. in Canajoharie, then purchased it.

The FBI recovered the painting at the Arkell Museum in Canajoharie as part of an international effort to return art stolen by the Nazis. It was returned to Roger Strauch, Mosse’s step-great-grandson, who thanked the FBI’s help in recovering the painting, the work of American artist Gari Melchers.

Sills also worked undercover at times and in national security investigations that she will not discuss. All of it, she said, was worth it.