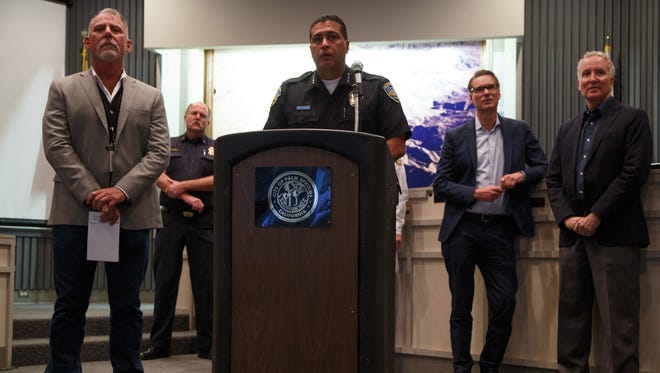 Palm Springs Police Chief Bryan Reyes will retire in August after 27 years working for the department and rising to the top of its ranks, city officials said Thursday.

Reyes will continue to serve as chief until Aug. 23, according to the announcement, in order to ensure a smooth transition to a new chief.

Reyes was hired as a patrol officer with Palm Springs Police Department in 1993 after serving in the United States Marine Corps. He rose to the rank of police chief in February 2016 after a short tenure as acting police chief following the retirement of former chief Al Franz.

Prior to that promotion, Reyes was on the SWAT Team for 15 years and held every rank in the police department.

“This 27-year journey serving the residents of Palm Springs — and six and a half years as Chief of Police — has been challenging and incredibly fulfilling thanks to the talented and dedicated people I have worked for, worked with — and ultimately those I have been responsible to lead,” Reyes said in a statement. “It is with a great sense of pride and accomplishment that I announce my retirement from the City of Palm Springs, a community I am proud to say is one of the most welcoming and inclusive in the nation — with an exceptional quality of life thanks in large part to a force of outstanding police officers.”

Reyes was appointed chief about eight months before the fatal shooting of two officers on Oct. 8, 2016, a day remembered by the department, city leadership and residents as one of the most trying in the city’s history.

Felix fatally shot the two officers through the closed security door of his home, and injured several others in the 12-hours standoff with police that followed.

Vega was killed just months before he was set to retire after 35 years of service and Zerebny was killed after recently returning to her patrol from maternity leave.

Ultimately, Felix was arrested, charged and convicted for the murders of both officers, an offense for which he has been sentenced to death.

Reyes was present in the courtroom when Felix was convicted by a jury who recommended the death sentence after weeks of witness testimony.

Reyes told reporters outside the courtroom after the verdict was announced on May 30, 2019, that the deaths posed a monumental challenge for those in his department who survived the standoff and were left to grieve.

“Everybody has been changed,” Reyes said of his department. “But we’re moving on from this step in the process, it’s our job to keep going.”

Palm Springs City Manager Justin Clifton, who started in that capacity earlier this year, expressed his admiration for Reyes’ long tenure of service to the city.

“Chief Bryan Reyes has led the Palm Springs Police Department exceptionally well these past six and a half years as Chief,” Palm Springs City Manager Justin Clifton said in a release. “While I have only known him a short time, it is evident that he is a tremendous leader and somebody that provided the continuity, stability and vision for his team and our community.”

“Chief of Police Bryan Reyes has shown extraordinary leadership overseeing the men and women of the Palm Springs Police Department,” said Mayor Christy Holstege, “His dedication to ensuring the safety of our community and incredible ability to engage with residents and businesses has been truly remarkable — and he will be greatly missed.”

This is a developing story and will be updated.