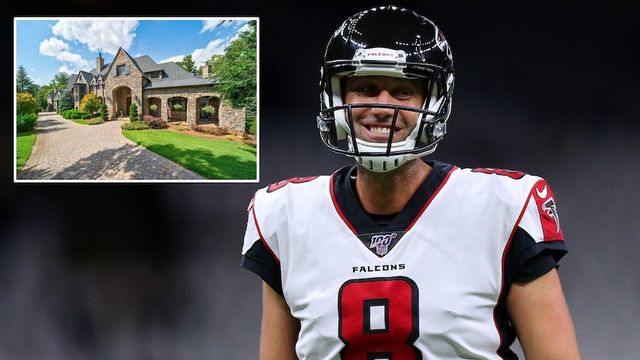 The newly retired quarterback Matt Schaub is letting go of his Suwanee, GA, estate. The upscale abode is on the market for $4,895,000.

Schaub purchased the property in April 2015 for $4.95 million, and owned it throughout his second stint with the Atlanta Falcons. He’s even willing to take a sack—the home went up for sale in September 2020 at the current asking price, which is just a touch less than what he paid for it.

Just north of Atlanta, the spacious spread is located inside the exclusive River Club, home to many athletes and celebrities over the years.

The custom build from 2007 offers six bedrooms and 7.5 bathrooms on 14,979 square feet of living space. Set on 3.29 wooded acres in a private cul-de-sac lot, the property faces the sixth hole of the Greg Norman-designed golf course.

The stone estate is entered via double doors, and the high-end details inside include custom woodwork, cathedral ceilings, and oversized living spaces to enjoy with family and friends.

The chef’s gourmet kitchen offers an enormous counter and cabinet space, as well as a large island with seating. Pizza lovers will rejoice in the built-in brick pizza oven that’s included, adjacent to the breakfast nook.

Inside the barrel-vaulted master suite on the main level is a sitting area and fireplace. Other luxe amenities include a 19-seat home theater with IMAX projection and a concession stand, custom bar, and catering kitchen, a two-story wine cellar, as well as an extensive game room decorated with sports memorabilia.

The outdoor spa also includes a massive, two-level waterfall. And you can cook up a feast in the outdoor barbecue area, which has two grills and plenty of al fresco space for dining. A porte-cochère and a four-car garage complete the property.

Now 39, Schaub played college football at the University of Virginia and set 22 school records in the process. In 2004, the Pittsburgh native was drafted in the third round by the Falcons.

He also played for the Houston Texans, Oakland Raiders, and Baltimore Ravens. At the conclusion of the 2021 season for the Falcons and after a 16-year career in the NFL, Schaub made his retirement official.