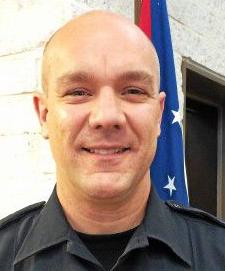 Madison Township Police Department didn’t have go through a period of leadership transition following the recent retirement of its chief, Matthew Byers.

That’s because township Trustees approved a resolution accepting the retirement of Byers on June 30 and reappointing him as chief on July 1.

Although Trustee Max Anderson Jr. was absent from that meeting, Trustee Board Chairman Peter Wayman joined Gauntner in approving the legislation.

Wayman commended Byers for his performance as police chief, a position he’s held since July 2015.

Ohio law allows public employees to retire, receive their pension and then be rehired for a public-sector job — which is often the same position they held prior to retirement.

As part of the agreement to be reappointed as chief after retiring, Byers accepted an 8.21 percent decrease in his yearly pay. Byers will now earn $92,332.67 annually, compared with the $100,591.86 salary he received prior to retirement.

Trustees also agreed that the $8,259.19 being cut from Byers’ original annual salary could be used to pay the township’s current part-time officers to work additional hours of road-patrol duty.

For Byers, the retire-rehire resolution allows him to extend his 27 years of service to Madison Township. He joined the Madison Township Police Department in 1994, after working a short time as a Madison Village police officer.

In 2015, Byers who then held the rank of sergeant, was named interim chief of the Madison Township Police Department. He filled a vacancy left by Chief Leonard Del Calzo, who retired following 30 years with the department.

After Byers directed the department on a temporary basis for about three months, trustees appointed him to the official capacity of Madison Township police chief.

“It’s a big responsibility, but I feel up to the task due to the amount of time I’ve been here and the support I’ve gotten from the officers of this department, from the trustees and from the community, and together, I think that we can get things done,” Byers said at a trustee board meeting on July 24, 2015, when township leaders authorized his promotion.

Six years later, in 2021, Byers said he had been contemplating retirement from the Madison Township Police Department and pursuing other career opportunities that had become available to him.

“I had considering retiring and moving on, but I’m very happy with the township,” he said, during a July 6 telephone interview. “I work with a very good group of people in the Police Department and township government.”

Gauntner said he appreciates all of Byers’ hard work as chief and his commitment to Madison Township.

“It’s a very difficult time these days to find anybody who wants to serve in the police service,” Gauntner said. “As we know, across the country police officers are retiring in droves. Matt’s done a good job for us, and I appreciate the fact that he’s willing to stay on, even though he could go on to greener pastures, and do other things.”

One of Byers’ priorities for later this year will be helping to provide information to registered voters about an upcoming five-year renewal levy for the township Police Department. Approval of the renewal levy, which township government leaders plan to place on the Nov. 2 ballot, would not increase taxes for property owners in the community.