Neuville had been the class of the field having built up a 57.4s lead over 13 of the 18 stages on Kenya’s brutal gravel and sandy roads and was favourite to win the iconic African event on its WRC return after a 19-year hiatus.

After a brave drive to maintain his lead in yesterday’s rain-hit final stage, the Belgian’s victory hopes disintegrated in an instant on the first of Sunday’s five stages.

Neuville and co-driver Martijn Wydaeghe slowed early in the test after suffering a right rear damper failure on their Hyundai i20 WRC. The pair crawled through the stage reaching the finish with their lead slashed to 11.7s, but the damage was unable to be repaired resulting in a cruel retirement.

It is third event in a row that Hyundai has seen a comfortable lead and strong chance of victory disintegrate after suspension issues robbed Ott Tanak and in Portugal and Sardinia. 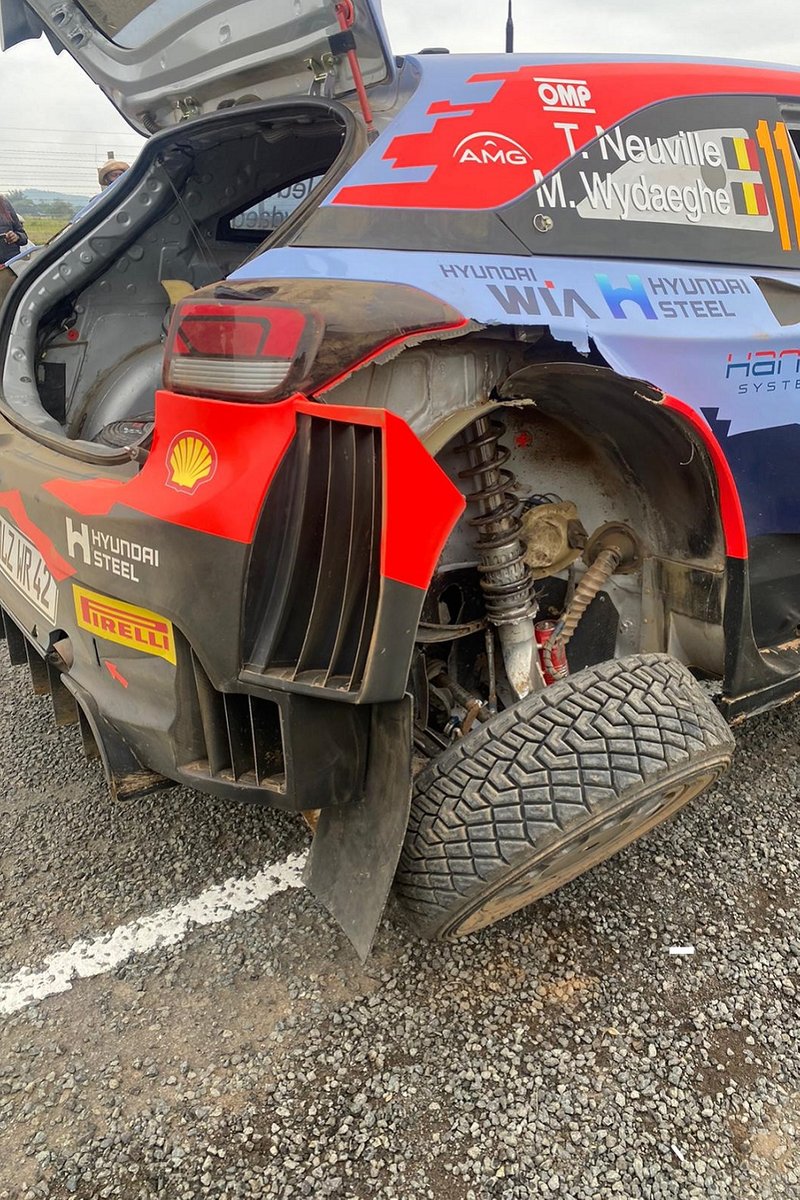 The crashed Hyundai i20 of Thierry Neuville

Neville’s demise handed Katsuta, who is yet to score a WRC podium, a shock lead although the Japanese driver has a 0.8s advantage over reigning world champion Sebastien Ogier.

Hyundai’s Tanak has been promoted to third albeit 1m13.3s adrift of the lead.

M-Sport Ford remained on course for a strong result with Gus Greensmith fourth and Adrien Fourmaux in fifth.

The opening stage on Sunday that will no doubt forever be etched into Neuville’s mind was won by Ogier as he took full advantage of his soft tyres in the damp yet humid conditions.

The Frenchman set a blistering pace on softs to win the test by 4.1s, denying Fourmaux a maiden stage win for the second time in the event. Although, Fourmaux’s time was helped by a clever off road excursion during his run.

Tanak came through the test in third having pushed to make up some of the time he lost on Saturday’s rain-hit final stage.

Hampered by a soft/hard tyre crossover, Katsuta could only manage the sixth fastest time as he dropped 13.5s seconds to Ogier, who closed the overall gap to the second-placed Japanese  driver to only 4.6s.

Organisers were forced to shorten the following Hells Gate test, as repairs were undertaken following the recce earlier this week.

Drivers were able to pass over the latter section at recce speed to make notes for when the stage returns to its full 10km length as the event’s Power Stage, the last test of the event.

Crews were faced with tricky foggy conditions for the short 5.63km run.

Toyota’s Elfyn Evans won the stage as he pursues a top 10 overall finish after rejoining the event on Saturday after retiring on Friday.

Evans was a second faster than Tanak while Ogier was third and moved to within 0.8s of rally leader Katsuta.