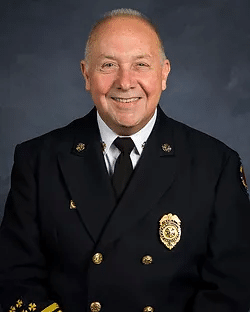 Martinette came to the Wilmington Fire Department in 2008. He has served as Fire Chief for more than 13 years.

“I had the honor of appointing Chief Martinette 13 years ago and he has played a vital role leading the modernization of Wilmington’s fire department, opening new fire stations, and improving fire services in our community. He has provided a solid foundation for continued progress. On behalf of the entire city council, I wish him an enjoyable and well-deserved retirement after a long and distinguished career,” said Mayor Bill Saffo.

When he left VBFD, Martinette served for six years as the Chief of the Lynchburg Fire and EMS Department in Lynchburg, VA and for another three years as an Assistant County Administrator in Hanover County, VA.

“Chief Martinette came to us at an important time in our history and was a transformational leader for this department,” said Deputy Chief Steve Mason. “Under his leadership, we became a progressive model for the modern fire service, prioritizing the health, safety, and wellness of firefighters, professional development and training of staff, and the implementation of community risk reduction.”

Martinette is well known in the field for his Search and Rescue experience, which includes the Colonial Heights Wal-Mart Collapse, deployments for hurricanes Floyd, Fran, Frances, Charlie, Ivan, Katrina, and Rita, as well as the Murrah Federal Building bombing in Oklahoma and the 9/11 Pentagon collapse.

“It is Chief Martinette’s extensive experience and study of emergency response that has guided him to be a leader in the industry and to remain on the cusp of the ever-changing landscape of the fire service,” said Administrative Service Manager, Meredith Mulford. “It has been a privilege to learn from him as a leader.”

“Chief Martinette is a strategic leader who raised the bar for the Wilmington Fire Department,” said Retired Battalion Chief David Hines. “His leadership and push for a culture of continuous improvement led to the department becoming one of only 200 internationally accredited agencies in 2014 and maintaining that status again in 2019.”

“The men and women of this department are truly amazing, and I will not soon forget their efforts to make our department among the finest in the world,” said Chief Martinette. “I admire and appreciate each and every one of them for the professionalism they display each day and the dedication they have to our profession.”

Martinette’s last day will be September 11, 2021, a memorable and symbolic day for those in the fire service, and especially for Chief Martinette. Twenty years ago, he was called upon to run rescue operations at the Pentagon on September 11, 2001.

Martinette frequently lectures on organizational leadership and specialized rescue operations to public safety, military, industrial, and law enforcement organizations. He’s the author of numerous articles and the first, second, and third editions of the Jones & Bartlett book Trench Rescue – Principles and Practice to NFPA 1006 and 1670. Martinette also has the distinction of being awarded a patent from the United States Patent Office for his “Sizing Buddy” nut, bolt, and drill bit sizing tool invention.