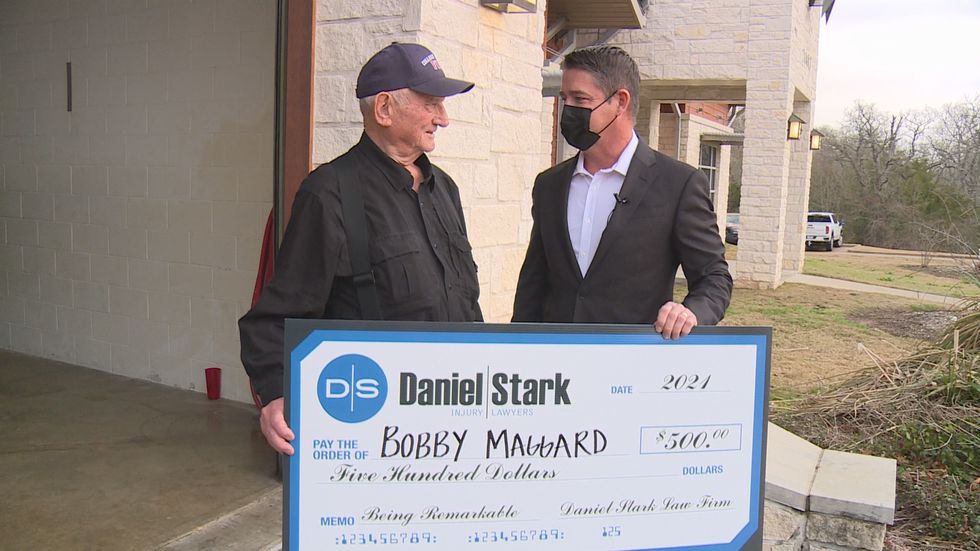 COLLEGE STATION, Texas (KBTX) – It could be day or night.

If College Station firefighters responded to a fire, you could bet Bobby Maggard was there with them as a member of the department’s CART and REHAB teams.

“If there’s a fire at 3 o’clock in the morning, this guy is going to be there handing out towels or water or anything else is needed,” said CSFD Captain Jason Giles.

“The firemen needed a little help too, so I started carrying ice, water, and Gatorade, and things like that,” said Maggard, who has volunteered to help the first responders for nearly two decades. And every morning at 5:15 a.m., Maggard is at Fire Station #5, taking care of most of the daily duties.

“He starts the coffee, unloads the dishwasher, takes out the trash, and then goes out to pick up the newspaper that gets delivered around 6:15,” said Cpt. Giles. “He ices up the coolers on the trucks, and even some in his own truck so that he in a moment’s notice can respond to give firefighters something cool to drink or hand out a cool towel.”

Maggard’s interest in helping – either at the scene of a fire or back at the station- was ignited after attending the College Station Fire Department Citizens Fire Academy. Since then he’s become a fixture at the firehouse, even earning his very own seat at the table as a member of this tight-knit family.

“And the mornings he’s not here because he’s spending time with family or on a hunting trip it’s really like there is something missing,” said Cpt. Giles, but now Maggard is having to step back and slow down. He recently suffered an injury at a fire scene and is retiring from the REHAB crew but he promises:”

“I’ll still be around and drink coffee with them and do what little I can now.”

Last week he was honored by the city council and he was also presented with several tokens of appreciation during a ceremony at the fire station.

His years of service, giving back, and helping others is why KBTX and Daniel Stark Injury Lawyers are proud to present Bobby Maggard with this week’s Be Remarkable award!

If you have someone you want to nominate for our Be Remarkable campaign click here! Be Remarkable airs on News 3 at 6 p.m. every other Monday and is proudly sponsored and made possible by Daniel Stark Injury Lawyers.