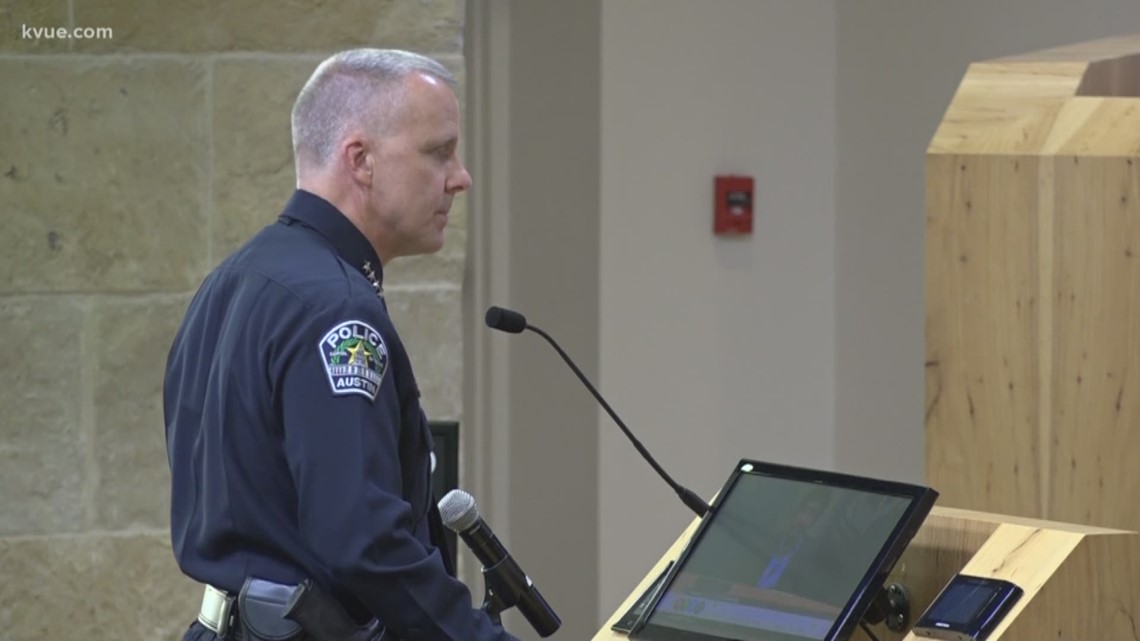 The APD police chief announced he will retire in March.

AUSTIN, Texas — After more than 30 years of service with the Austin Police Department, Police Chief Brian Manley on Friday announced he plans to retire this March.

He made the announcement in a memo to the city manager on Feb. 1 and during a press conference Friday.

“Today marks 30 years to the day my father pinned my Austin police Department badge on me for the first time,” the memo stated. “The sense of pride he had, along with that of my mother and brothers, can only be matched by my sense of gratitude for having been able to serve our community these past three decades. As most things in life come to an end at some point, my career with APD will do so as well with my retirement on March 28, 2021.”

Timeline: A look at Chief Brian Manley’s career with the Austin Police Department

Policing is at a national crossroads, and this has been an extraordinary time to lead a department as it begins a very important conversation. I thank Chief Manley for having taken Austin to this pivotal point and congratulate him on his retirement. Throughout Chief Manley’s leadership, Austin has been one of the safest, large cities in the country. He oversaw a $422 million budget, the largest per resident among big cities in Texas. I personally witnessed up-close his inspiring leadership on the ground during the 2018 Austin Serial Bombings. We are grateful for Chief Manley’s 30 years of public service in his hometown.

While Chief Manley and I have had major disagreements about the direction of our City, I respect his years of public service and wish him well in his future endeavors. The community is now tasked with choosing the future path of our police department. Our goal must be protecting public safety and civil rights, for all neighborhoods and for people of all backgrounds.

I very much appreciate Chief Manley for his long record of distinguished professional service in Austin, his hometown, especially given the exceedingly trying times of the last several months. I want to thank him for the service he offered to our community so genuinely and well in his 30 years with APD.

I support the commitment of City Manager Cronk to a nationwide search for our next APD chief and the extensive community engagement that will inform that process. As we continue the critical work of reimaging public safety that was initiated last fall, leadership at APD will be a key component to rebuild the trust of all communities and bond us together.

I am grateful to Chief Manley for his service to Austin, and I wish him the best in this new chapter. Chief Manley led our city through some of the most challenging times in recent memory, such as the 2018 serial bombings, and our community will never forget his leadership and dedication.

Our city is in the midst of a major transformation to our public safety system, and as we look across the nation for our next police chief, my top priority is ensuring this person is ready and willing to proactively identify issues and find solutions to make all Austinites safer. In order for us to achieve the vision of Austin we are working towards, we must continue to build partnerships between the city, law enforcement and community members. I am committed to making sure our next steps advance our goals to reimagine public safety in Austin.

Chief Manley’s retirement comes at a time where people of the global majority have suffered at the inability for APD to cultivate genuine relationships with the Austin community. In these last few years, there has been an enumerated number of shootings of unarmed Austinites by officers who Manley supervised. In addition to these horrific officer-involved shootings, there were clear patterns of proven racial profiling, internal racism, retaliation or whistleblowers and absence of de-escalation practices in-the-field. Through numerous investigations, city council meetings, community forums and conversations with community groups, it was shown that Chief Manley lacked the ability to make the necessary changes. Chief Manley seemed to have an unwillingness to take ownership or fix the harms caused by his team.

This retirement is gracious and necessary because APD needs transformative and expansive leadership. Chief Manley retiring allows for the hiring of leadership capable of transforming a racist culture into a space where the employees of APD and those impacted by APD feel seen, heard and protected. Chief Manley’s willingness to cultivate healing experiences for APD is one thing I can say I am proud of him for, because there isn’t enough advocacy for trauma-informed care for first responders. First responders, like police officers, have chosen a profession that includes being traumatized but are not supported by the systems that hire them to deal with their trauma. People constantly dealing with trauma aren’t equipped to engage in experiences from a non-traumatized space without intentional care. Chief Manley’s work to create wellness within the department was honorable as I attended meetings to learn, connect, and contribute.

We look forward to collaborating with Chief Manley on transformative policy, after he settles into his retirement.

Brian Manley’s resignation was long overdue. His tenure as chief of police was a reflection of a different time and place in regards to how communities across the nation view policing and public safety. Today is a new day. We are demanding and expecting something much more – a transformed and wholly new approach to public safety.

Brian Manley was a bottleneck in the reimaging public safety process. It is my hope that we can move forward with the work of transforming the institutions that uphold racism and inequity through violence on our communities. This resignation is no consolation for the families who lost lives under Manley’s leadership but it is a step in the right direction.

This has just become an opportunity for the City of Austin to take a bold and radical stance. We call on the City of Austin to uphold its commitment to racial, class and gender equity and bring community leaders into the process of filling this role. We demand a leader who is willing to be a trailblazer in the transformation of the institution we look forward to formally referring to as the “Police.”

The Greater Austin Crime Commission and a grateful community thank Chief Brian Manley for 30 years of dedicated service. He has led the Austin Police Department with character and integrity during difficult moments for the community. Like every first responder family, Chief Manley’s wife, Tina, and children have shared in the sacrifices over the past three decades. They deserve our appreciation, as well.

As chief, Brian Manley championed efforts to expand community policing and confronted the public safety challenges of a growing city. The Austin Police Department is a better organization because of his humble and effective leadership.

The Greater Austin Crime Commission is a proud supporter of the Austin Police Department, and we wish Chief Brian Manley the very best as he enjoys a well-earned retirement and pursues new professional opportunities.


Coldest weather in over 30 years possible for Central Texas