Leland marine on a mission to save Afghan lives, even in retirement 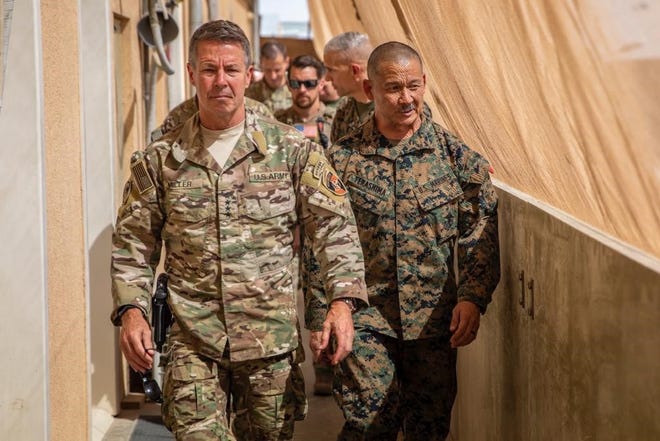 When Manzoor came to the United States from Bost, Afghanistan, in June, he couldn’t believe it was real.

“Pretty much daily, multiple times a day, he would ask, ‘Is this for real? Am I really here?'” said Eric Terashima, a retired Marine Col. who helped Manzoor get to the United States.

Manzoor, who’s being identified by first name only to protect his safety in Afghanistan, is just one of four interpreters and 15 people total Terashima has helped out of Afghanistan in the last few months.

“The contrast of being from Afghanistan — where there’s no security, they don’t know if they’re going to die every day — to now being in the United States where they’re safe and secure,” he said. “All of them are in complete shock and it’s literally surreal.”

Despite only spending nine months of his 30-year military career in Bost, Terashima said living in such close quarters with their interpreters and other helpers brought them closer together than anywhere else he’s served

“Because of that condition, that was the tightest I’ve gotten with my interpreters, and the people who we were trying to help,” he said. “When we got done with the deployment I told my guys, ‘If you ever need anything, just let me know,’ and they all maintained contact with me over Facebook.”

So when Manzoor sent him a message saying he was having trouble paying for medical and visa expenses, Terashima made it his mission to help. The medical expenses alone would cost 10 times more than median income in Afghanistan.

“It would be virtually impossible for your average person over there (to pay for it) so I shelled out-of-pocket,” he said.

Since helping Manzoor, he’s been deluged with messaging from Afghans looking for help out of the country. Terashima said he’s in contact with about a dozen people who he’s still trying to help and with the U.S. withdrawal, they’re getting more desperate.

“Even though they keep asking me every day to help, I’m like, I can’t do anything more,” he said.

According to Terashima, as the U.S. withdrew from the country there has been more assistance and programs to help get Afghans like Manzoor out, but the process became more bureaucratic with requirements most could not meet.

He said he’s advocating a change in policy away from documentation required of Afghans now, like a human resources letter or ID badge showing they helped the U.S. government.

“If you work somewhere eight years ago, what are the odds of you having your ID badge from that company?” he said. “Especially in an environment like Afghanistan, where if you’re caught with that, that could be your death?”

Terashima has also started a GoFundMe fundraiser to help cover expenses to get the interpreters and their families to the U.S. and start a new life. He’s also networking in the cities they’ve relocated to for Afghan ex-patriots and other mentors who can help them assimilate.

“Imagine flying halfway around the world to a completely different country with two cases of stuff and trying to start life over again,” Terashima said. “So I still need to set all these people up for life in the future.”

He said his goal is just to help as many as he can. Though the task can be overwhelming and heartbreaking, he focuses on what he can do and the support he’s received from others.

“For me, there’s nothing that’s more fulfilling than trying to help my friends and their families,” he said.