Inflation rarely evokes a positive connotation. And rightfully so. The concept of a dollar being worth less tomorrow than it is today is a scary thought. Hyperinflation can bankrupt an economy — or in the case of 1920s Germany, sow the seeds for war.

However, moderate inflation isn’t necessarily a bad thing. In fact, inflation routinely got above 4% during the economic boom of the 1950s. By the end of 2021, The Federal Reserve sees unemployment falling to just 4.5% and inflation rising to 2.4% — which could save U.S. households holding debt an average of $1,404. Here’s why rising inflation could be a good thing if you have debt but a bad thing if you’re in retirement. 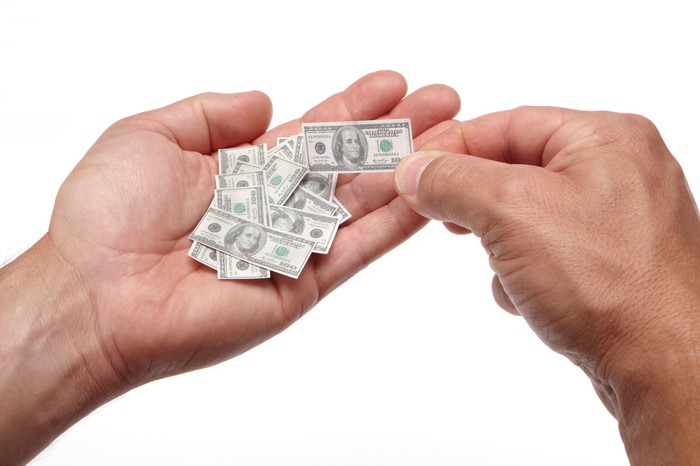 Why inflation is rising 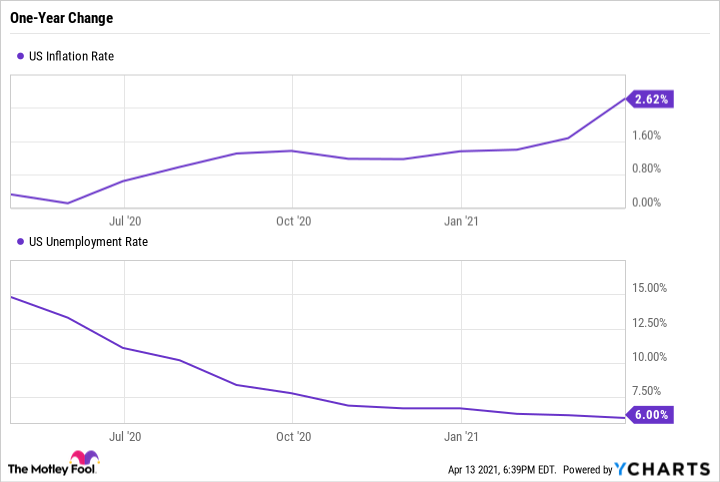 US Inflation Rate data by YCharts

Low interest rates and stimulus checks make it easier to purchase goods and services such as homes, cars, consumer goods, and much-needed vacations. The result: a surge in the housing market (which is now at a 10-year high), not to mention a global chip shortage.

With the vaccine distribution well underway and the U.S. economy roaring back to life, the demand for experiences not felt in over a year is outpacing supply. Baseball stadiums operating at 50% capacity are having no issues selling out, so they can raise prices. Bars and restaurants that have struggled for months are inclined to up prices, and consumers are happy to oblige. After skipping their annual summer vacation in 2020, many Americans are expected to let loose this year, which means businesses like airlines, cruise companies, and resorts have the green light to raise prices.

A blessing for those with debt

Prices rising throughout different sectors of the economy is the essence of inflation. You and I are experiencing it right now. However, inflation paired with low unemployment means wages should rise too. As business improves, companies large and small look to hire more workers, which makes it easier to find a job or lobby for a raise. In its March 2021 report, the National Federation of Independent Business (NFIB) noted that a record-high 42% of business owners had job openings they couldn’t fill, 28% raised compensation (the most in the past year), and 17% plan on raising compensation in the next three months.

Rising wages illustrate the benefits of inflation for paying down debt. Let’s say someone making $20 an hour gets a 5% raise to $21 an hour. If inflation is also 5%, then the cost to see a baseball game could also rise from $20 to $21. So, it cancels out. However, the nominal value of existing debt stays the same. Therefore, if that same person has a fixed-rate mortgage, student loans, or credit card debt, the real cost to pay down that debt just got 5% easier. Debt is simply the obligation to pay someone back, usually in the form of U.S. dollars. If a U.S. dollar is worth less than it used to be or you’re making more than you used to, then you effectively have less debt. As great as this sounds, bear in mind that inflation is a double-edged sword that can hurt retirees in the same way it helps debt holders.

A curse for retirees on a fixed income

While inflation may benefit those who borrow, rising inflation is typically very bad news for retirees. And there are a few key reasons for that.

Inflation is no friend to Social Security recipients

First and foremost, most retirees depend on Social Security as a key source of income. Benefits are supposed to be protected against inflation, but that hasn’t been the reality. Cost-of-living adjustments (COLAs) — also known as periodic benefit increases — are pegged to the Consumer Price Index for Urban Wage Earners and Clerical Workers (CPI-W). This price index underestimates how much seniors spend in key areas including housing and healthcare, both of which tend to see prices rise faster than average.

Social Security COLAs have done such a poor job of keeping pace with the actual inflation seniors experience that the Senior Citizens League estimates benefits have lost 30% of their buying power over the past two decades.

And COVID-19 has only made things worse because it changed the way people spend money, yet the basket of goods and services used to calculate CPI-W didn’t change accordingly. In fact, seniors received one of the lowest cost-of-living adjustments in years in 2021, even as their spending in two key areas — groceries and housing costs — rose.  And the loss in buying power is only expected to continue or accelerate with rising inflation. 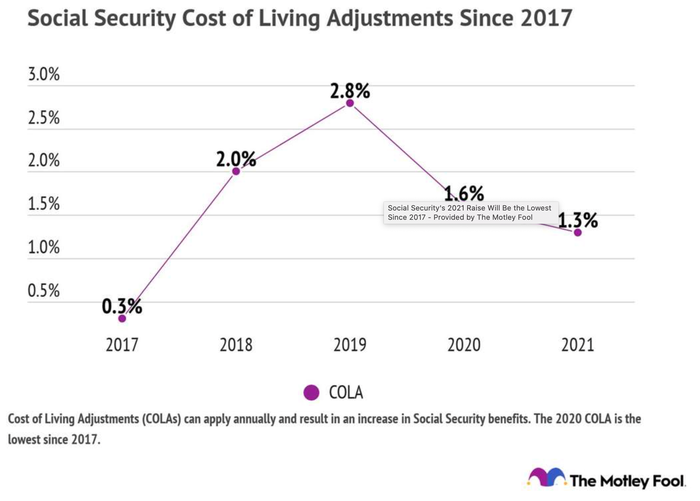 Retirees also depend on their savings as a key source of income. And when prices rise, they’ll either see a downgrade to their living standard or need to pull more money from their retirement accounts — putting them at risk of draining their nest egg too quickly.

Seniors following the 4% rule, for example, are told by experts that they won’t run short of money if they withdraw 4% of their account balance in the first year of retirement and increase the amount by the inflation rate in each subsequent year. When the inflation rate is 2.6% instead of 0%, they’ll have to pull a lot more from their accounts each year just to maintain the same buying power — especially if their Social Security benefits are also losing ground.

While it’s easy to argue their investment account balances will rise when the economy booms, it’s important to remember seniors typically invest conservatively and with good reason — they don’t have time to wait out downturns in the market. While a conservative portfolio is a safe bet, it imposes inherent limits on the returns retirees can earn.

So just how badly could high inflation affect seniors? An older study found that with an inflation rate of 1%, seniors relying on the average Social Security benefit alone would see a $34,306 shortfall over a 20-year retirement. When the inflation rate rises to 3% (which could very well be where we’re heading), that shortfall jumps to $117,553. That’s a lot of extra money that has to be pulled from a retirement investment account (assuming seniors have one).

Unfortunately, there’s little retirees can do to reverse the trend of rising inflation — but they can prepare for it. Seniors who fear the loss of buying power should consider exploring investments that can serve as a hedge against inflation while making sure to maintain a well-balanced portfolio and live on a budget that enables them to maintain a safe withdrawal rate.