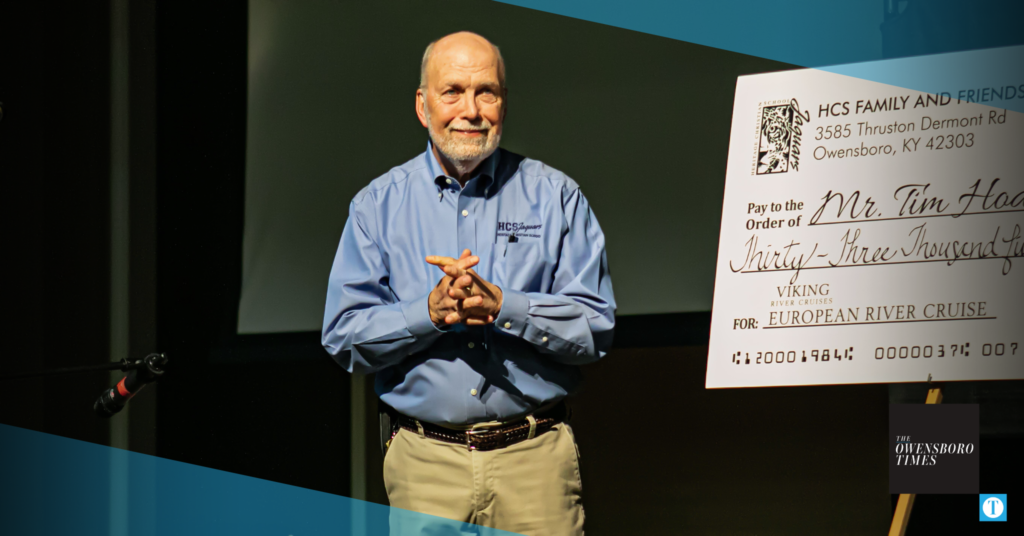 Tim Hoak fought to hold back tears Friday night, thankful for the overwhelming support shown during an emotional retirement celebration held in the Heritage Christian School gym. Hoak is retiring after 33 years as the administrator for HCS, leaving behind a legacy of a true servant leader that displayed his faith in all walks of life.

In August 1988, Tim and Camilla Hoak moved from South Carolina to Owensboro — specifically to come to Heritage Baptist Church and Heritage Christian School, which was only K-4 at the time. Tim, who had no school teaching experience, taught 4th grade in addition to his role as administrator. Meanwhile Camilla, who is also retiring this year, joined the staff as a kindergarten teacher.

Heritage Christian was founded by the late Ted Christman in 1984, starting with a kindergarten class of only 12 students. There are now roughly 200 students, with the school having expanded to Pre-K through 8th grade — along with receiving renovations and adding a gymnasium.

Tim never wavered from his commitment to the school, and loved every step of his journey over the last three decades.

“It was the right fit. I didn’t know how it would work out, but after the first couple years it seemed like a good fit,” he said. “I really enjoyed interacting with the kids. There’s a part of me that’s a storyteller at heart and I love interacting with the kids on that level. For whatever reason, God seemed to bless that. The school grew. Not to say we didn’t hit a few bumps along the way, we sure did, but it was a wonderful place to be and I had no reason to go anywhere or do anything else. I was happy and satisfied right there.”

Jim Gauley joined the staff in 1991. Gauley, now a longtime middle school teacher and assistant administrator at HCS, said he accepted the position because of Tim.

Gauley was living in Louisiana at the time, making cold calls to schools to find a job. Tim was on the other end of the phone call that mattered most.

“He was one of the few administrators who took the time to take an interest in me even if I wasn’t going to work out,” Gauley said. “I was interested in being a high school teacher, but Heritage only went through middle school. Regardless of what I was looking for and what they were looking for at the time, he was willing to encourage me, counsel me. His phone conversation with me is what brought me to the school 30 years ago.”

Now, Tim is one of Gauley’s closest friends.

“Tim has been a selfless servant both to our school and our church,” Gauley said. “He gives attention to everyone he talks to. That’s what marked him 30 years ago. That’s what still marks him every day. … He has been an example to me in putting others before himself. And that is just a reflection of how the Lord has treated him, he has done the same to others.”

Tracy Ladd, currently a middle school teacher, will be taking over as administrator at the end of the school year.

Ladd has taught at HCS for 21 years, working with Tim the entire time. Long tenures at the school are not uncommon.

“Tim’s principled, strong leadership has been steadfast over the past 33 years, which is why our enrollment has stayed solid and why our faculty has not had major changes until recently as teachers are retiring after several years in the classroom,” Ladd said.

Ladd said Tim’s contributions to the students, families and staff over the decades have gone far beyond the classroom.

“Mr. Hoak reflects godly characteristics that we teach our students: kindness, patience, courage, compassion, servanthood, sacrificial love,” Ladd said. “It’s no wonder that many have contributed to his retirement gift in an overwhelming way. This outpouring of generosity speaks loudly to the kind of man he is and how he has faithfully served at Heritage Christian School.  He has been a teacher, principal, counselor, and friend to countless families who love and respect him.”

Janet Stewart first got involved with HCS as a parent in 2003 when her first child enrolled. Since then, all three children have graduated 8th grade from Heritage Christian.

Stewart said she’s had the pleasure of working as Tim’s administrative assistant for the last 10 years.

“I have grown personally in my faith, my character, and professionalism just by working under him,” she said. “It has been my pleasure to be mentored by him and to serve alongside him in this ministry of HCS. Anyone who has been under Tim’s influence would say they feel the same way. That is one reason why retirement gifts have flowed in so graciously. He is well-loved and rightly so. Tim will give glory to the Lord, to whom it is ultimately due. His humility is part of what makes him who he is.”

Jo and Bill Barron have six children and when the couple put their faith in Jesus many years ago, their path led to Heritage Christian and Tim.

One day while visiting a kindergarten class, the Barrons watched as the students recite the biblical ABCs — a scripture for each letter of the alphabet.

“We were greatly impacted because by then we knew that there was no substitute for teaching any subject without going through the filter of God’s word,” Jo Barron said. “Four of our children were still young enough to experience at least grades 6-8, and our youngest from K-8 under Tim Hoak’s leadership.”

The Barrons have now known Tim Hoak since 1995.

“As HCS parents, we saw and see to this day that he is a man of integrity who lives a life that bears proof to what he says he believes as a follower of Christ,” Jo Barron said. “We don’t believe there’s a better statement one can make about another than that.  As a volunteer there for many years, I witnessed the respect that his staff had for him.  Never did I hear a negative word spoken about Tim Hoak, from parents or from staff.”

Currently, between 40-45 students at Heritage Christian are the children of former students.

“That says volumes to me,” Tim said. “We’ve had former students who were not the best students when they were in school — they got in trouble a lot, they were challenging or difficult — then they grew up, got married and had kids and they want to send their kids back to us. That’s been extremely rewarding and just a testimony to God’s kindness to us.”

Another reward, Tim said, are the many lessons he learned along the way.

Tim was a leader, but more importantly he was a servant and a man who truly lived by the words he preached. Anyone who spoke of him made sure that point came across.

“He’s been a true servant leader,” Gauley said. “He does anything and everything at the school, whether it’s cleaning up vomit or things like that, which many administrators might think is beneath them. He has never thought of himself too highly. That servant leadership is what is so striking about him as an administrator. That’s why I stayed here for 30 years.”

“People seek his counsel both from our church, but also families in our school who go to other places for church have sought him for spiritual counsel,” Gauley said. “He’s served as a pastor for many years as well, and it fits him well. He shepherds well in our school even as an administrator.”

Even as a parent, Barron was able to observe Tim’s desire to serve others.

“He did not distance himself from the work others were doing around him,” she said. “It was not unusual to see him dive in and help with the grunt work. There was not a task beneath his position that I don’t believe he wouldn’t do.”

Tim is quick to give the glory to God, and his commitment to a biblical education has kept the school on a steady path forward.

Gauley said as Tim has grown in grace, the school has also reflected that maturity and growth in a gracious spirit toward others.

“He’s of course wiser from more years of experience, but also there’s a confidence that’s been built. Our school desires to have a biblical foundation, and Tim has not wavered from that,” Gauley said. “That has been what has kept our ship stable and steady as it goes.”

“While Mr. Hoak has led HCS to grow and evolve over time, he has also been the one to make sure that some changes do not happen,” she said. “He is a primary reason that this school has stayed true to its mission to ‘glorify God by training students in a Biblical worldview’ … in these days of cultural shifting and crumbling, keeping a true Biblical worldview is not an easy task.”

Ladd hopes to carry on that tradition.

“My goal as the next administrator is to follow in Mr. Hoak’s footsteps as closely as possible in terms of adhering to the school’s mission,” she said. “We want to teach our students to view all of life from a Christian worldview and to live accordingly. This is how Heritage Christian School will continue to impact families for the glory of God.”

Tim said he was blessed and thankful for the last 33 years.

“Whatever good has come to our community from Heritage Christian School — and I think a lot of good has come, we’ve touched a lot of families and influenced a lot of people — the bottom line of all of that is the goodness and kindness and grace of God,” he said. “It’s because he blessed what we did. It’s not because we were so good at what we did — I think he helped us do a good job at what we did but really the bottom line is the glory goes to God. He’s behind it all and we’re very thankful.”