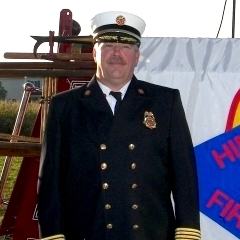 Al Barber, the Hinesburg fire chief who became the center of the town’s reckoning over intolerance after sharing a homophobic meme on his Facebook page, will retire this summer, the department announced Friday.

Barber will retire July 1 after 22 years as chief of the Hinesburg Fire Department, according to a post on the department’s Facebook page. He will stay with the department as a senior firefighter.

Barber came close to announcing his retirement in late April after a closed-door meeting with Todd Odit, Hinesburg town manager.

Barber initially agreed to step down on the conditions that the town begin a search to find a full-time, paid replacement as well as Hinesburg selectboard support for the department, according to emails provided by Odit to VTDigger.

Barber reneged on that agreement the following morning. He decided not to retire “after thinking about what my parents taught me, what we teach our children and grandchildren, which is to take sincere responsibility for your actions, which is what I have done and discussing with Department members,” Barber wrote.

Support for Barber poured in on the the fire department’s comment section, but sentiment online was mixed in the weeks after he shared the homophobic meme.

Messages on Front Porch Forum obtained by VTDigger depicted a community split between wanting to move on from a simple mistake, and others wanting to use the incident as a moment to learn and grow.

The Hinesburg Racial Equity Group, a collection of residents committed to education around systemic racism and other forms of oppression, told VTDigger some residents fear speaking out against the department because of past interactions that fall “into the category of bullying, hazing and harassment.” Barber denied these claims.

Now, the group is focused on the second major incident in as many months surrounding LGBTQ issues.

A small group vandalized about a dozen pieces of LGBTQ artwork made by students at Hinesburg Community School last weekend. Hinesburg Police Chief Anthony Cambridge said the department is investigating the incident as a potential hate crime.

Recovered video footage showed the individuals spitting on the drawings, in addition to coating them in a dark, staining liquid, Cambridge said.

The Hinesburg Racial Equity Group was “devastated” to learn of the incident, they wrote in an email to VTDigger.

“We must all work to end hate in all forms,” they wrote. “This includes memes, microaggressions, vandalism and violence.”

The three suspects are juveniles, and one has already been cited, Cambridge said. Two more citations are expected next week.

Barber could not be immediately reached for comment for this story.

Missing out on the latest scoop? Sign up here to get a weekly email with all of VTDigger’s reporting on politics. And in case you can’t get enough of the Statehouse, sign up for Final Reading for a rundown on the day’s news in the Legislature.