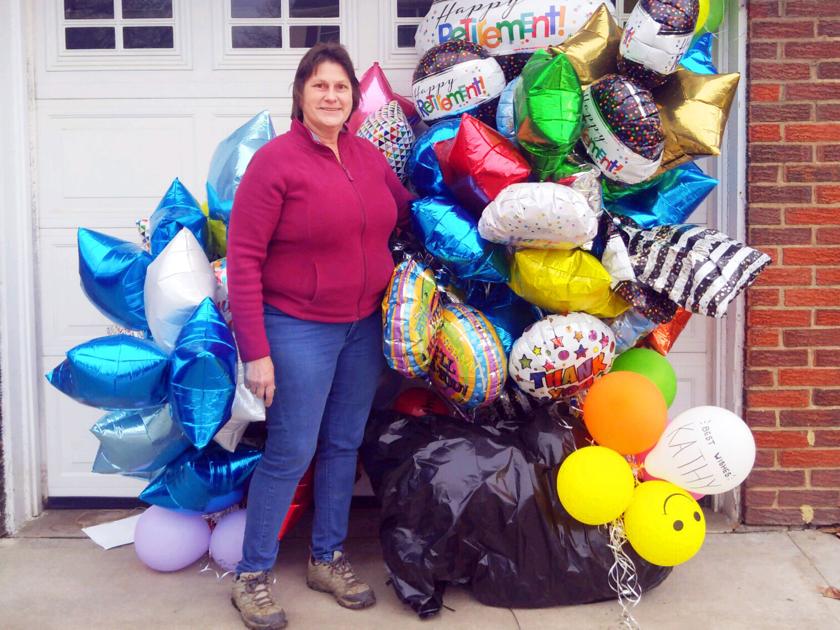 Neither snow nor rain nor heat, as per the fabled U.S. Postal Service Creed, stopped Kathy Cooper from the swift completion of her appointed rounds.

And so a cover of clouds wasn’t about to keep her from doing her duty Feb. 26, her final day of work before retiring after delivering mail for 30 years in Peters Township.

Adding a special element to the day was her greeting by residents of the Country Brook neighborhood.

“I thought it would be cool for her to enter our neighborhood and see a colorful landscape of balloons on the mailboxes, showing our appreciation,” resident Lupe Rovito said.

As someone who moved to Country Brook about the same time Cooper started delivering mail there, Rovito got the word out to fellow residents about making for a festive occasion.

“A suggestion is made in our neighborhood, and then the neighbors don’t hesitate to come together and spread happiness, anything to brighten somebody’s day,” she said.

In Cooper’s case, she had gotten to know many of the residents well over the years, becoming a friend in addition to someone who brought the mail faithfully.

“She is a kind and caring person, and she has provided excellent service for so many years,” Rovito said. “She has seen so many of the neighborhood’s children grow up to be adults.”

For her retirement day, some of the Country Brook residents wondered if Cooper might arrive earlier than usual. So they acted accordingly.

During her last few days on the job, Cooper made sure to greet as many residents as possible.

“She was making a conscious effort of stopping when she knew people were home, and she was saying goodbye and that she was going to miss the neighborhood,” Rovito said. “People were going in and out of the neighborhood to run errands, and they weren’t going to be home when she did her last day. So they were stopping at her mail truck and waiting for her to talk to her.”

Rovito, who plans to keep in touch with Cooper, is glad to have helped organize something that turned out to be so positive.

“Especially during this past year that we’ve all had to experience,” she said about the COVID-19 pandemic, “it kind of puts your mind off of it.”