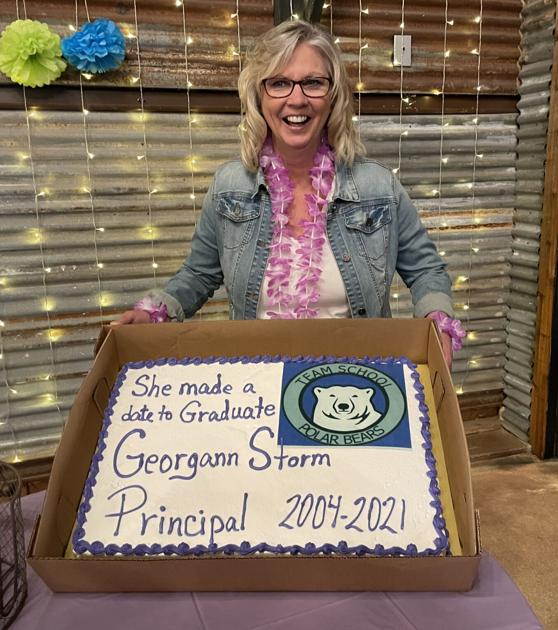 Commencement exercises for the Janice Evers TEAM School Class of 2021 served as a major milestone for both the honorees and Principal Georgann Storm, as she graduated — to retirement.

Storm, who has served as the TEAM School administrative leader since 2004, is retiring following 27 years of service in education. The majority of those years have been with TEAM School, starting in 2000 in the classroom as a social studies and government teacher.

It was her predecessor, Joe Russell, who first approached her about the possibility of a move into the TEAM School principal’s office.

“When Joe Russell began considering his retirement, he asked me about my interest in becoming the next principal,” Storm said. “He told me he could see I had a love for at-risk students and a way of motivating them.

“I really loved the classroom and hearing students tell me how excited I would get in teaching them about history and government. But his words were a confirmation to me that I needed to go back to school and get my Master’s degree in administration.”

In her 17 years as principal, Storm estimates she has seen more than 1,500 TEAM School students “make a date to graduate,” then cross the stage to receive their diplomas. Her retirement coincides with the 30th anniversary of the district’s alternative high school — one of the first to be established in the state.

“I told the Lord I wanted to be at TEAM School as long as it was his will,” she said. “I really felt at the start of this school year it would be my last. My husband is in his third year of retirement. I feel it’s time for us to spend more time together traveling and with our eight grandchildren.”

In her final year with TEAM, she has overseen the school’s transition from the location at the former Adams Elementary School campus to its new home. TEAM School takes up much of the second floor of the renovated Cleburne High School main building, which also serves as a Career and Technical Education/Fine Arts facility. The move to the CHS campus places TEAM students only steps away from the numerous programs available through CTE — rather than their previous drive across town.

“We loved our campuses at Liberty Chapel and Adams — especially because of all the oak trees,” Storm said. “But it’s been great being under one roof and to have access to all CTE has available for students.

“The learning environment our students and staff have now is so nice. I love having an assembly room and a place to present, which has allowed us to have more guest speakers — and space where we can all gather together. We like the breakout rooms which allows our students to work outside the classroom in small groups or on an individual assignment. I’m very happy to have spent this first year in our new facilities before I retired.”

Over the course of her 21 years with TEAM School, Storm has stored up many special moments — some funny, many touching — all memorable.

“I have so much to look back on,” Storm said. “A special memory involves a graduate who went on to enlist in the Navy. Out of the blue, I received a call from him inviting me and Valerie Pogue, who was our school counselor at the time, to come to a comedy club in Dallas where he was performing. We went, and his monologue included stories about TEAM School — and the both of us. That was pretty neat.

“When we were at Adams, we had to deal with two raccoons, a mama and her baby, who wreaked havoc in the social studies classroom. We also learned to anticipate periodic ‘moments of silence’ as instruction would be drowned out by the trains that rolled by throughout the day. I will always remember our own Relay for Life Walks we had around the campus involving students and staff, which were organized by TEAM teacher Nancy Davis, who went through her own courageous fight with cancer.”

Her best memories center on students and helping them achieve their high school diplomas — on time or long after their date to graduate.

“We had the opportunity to help a student who came back to us 10 years later,” she said. “All he needed was to pass one class and one state-mandated test to get his diploma. He was doing fine in life, but he wanted his son to see his dad achieve his high school diploma. He wanted to see if we could help him, and I said ‘yes’ before checking with anyone. I knew this was something we had to do. Our students never give up, even when time has passed.

“It’s always special when we see the parent of a student, or a graduate, and they say ‘thank you,’” Storm said. “We hear often how TEAM School brings out a student’s potential.”

Among the graduates who is thankful for Storm and TEAM School is Wheat Middle School science teacher Anahi Villanueva.

“Mrs. Storm will always be an important part of my life,” Villanueva said. “I wouldn’t be who I am today without her and my former TEAM School teachers. She has never left my side, even after I graduated, and that’s how I knew God had blessed me with the right people at the right time. I was ready to give up because school was hard. I was a ‘child left behind’ until I got to TEAM School.

“Mrs. Storm was my history teacher. But she was more than that. She also helped me as a struggling reader. She saw more in me than I saw in myself. When I would complain about having to learn history and read about things I didn’t feel were important, she would laugh and say, ‘you are our future, and if you don’t know about the past, how will you make sure the same mistakes don’t happen again? How will you be the leader we need?’

“She had an answer to all my questions, and the strength I needed when mine fell short. I’m the teacher I am because of her.”

Former TEAM School teacher and Cleburne High School administrator Rina Ramos, who now serves as a high school principal in west Texas, also had words regarding Storm, as she addressed graduates as the guest speaker at their May 25 commencement ceremony.

“I never knew when Mrs. Storm would pop into my classroom to see what was going on,” Ramos said. “You all know she is always everywhere — at once. We also know that we wouldn’t be here today without her. She is one of a kind. To quote my son, who is a 2011 TEAM graduate, Mrs. Storm is TEAM School.”

As she turned the tassels on the caps of her last set of graduates, Storm said a flood of emotions and thoughts ran through her mind.

“It was hard, but I also felt it was one more wonderful celebration to experience and share with our students,” she said. “I have always felt graduation should be about the graduates, and not anything else. It was emotional — but it always is because it’s a TEAM School graduation and a huge accomplishment for our students.”

In more than two decades at TEAM School, Storm is proud of what has been accomplished, and where the program is going.

“I feel we have always adapted and changed through the years — and I’m proud of that,” she said. “We put in a Personal Graduation Plan for our students long before the state made it a requirement for high schools. We called ours a GPS — to symbolize our students would always know where they were going on their academic journey.

We’ve always had a tremendous staff. We get calls all the time from people wanting to teach here because of the great things we do here. As we celebrate our 30th anniversary, I am pleased with how we have raised awareness of this school as an academic choice campus.

“Several years ago our students began participating in the Dual Credit program with Hill College, followed by the District’s Career and Technical Education program. Like their peers at CHS, they are achieving college credit while at TEAM School. Seeing our students engaged in CTE and achieving industry certifications and internships with HOLT CAT is tremendous, and has had such a great impact.”

While she plans for a slower lifestyle, highlighted by travel and time with the grandkids, Storm admits she’s not one to sit still. Her retirement will allow her to devote more time to her role of chairman of Shelby’s Bridge, a non-profit agency for adults with disabilities located in Sudan, Texas.

“The people we work with have aged out of public schools, or have aging parents, and need a place to live as they continue to build on their skills,” she said. “In the upcoming year we will have housing and jobs for our high functioning Friends. Through Shelby’s Bridge, we also operate a thrift shop and the Sunshine Café.

“I’ll be making periodic trips to Sudan, to continue my journey on a new path. You know I can’t sit and do nothing.”