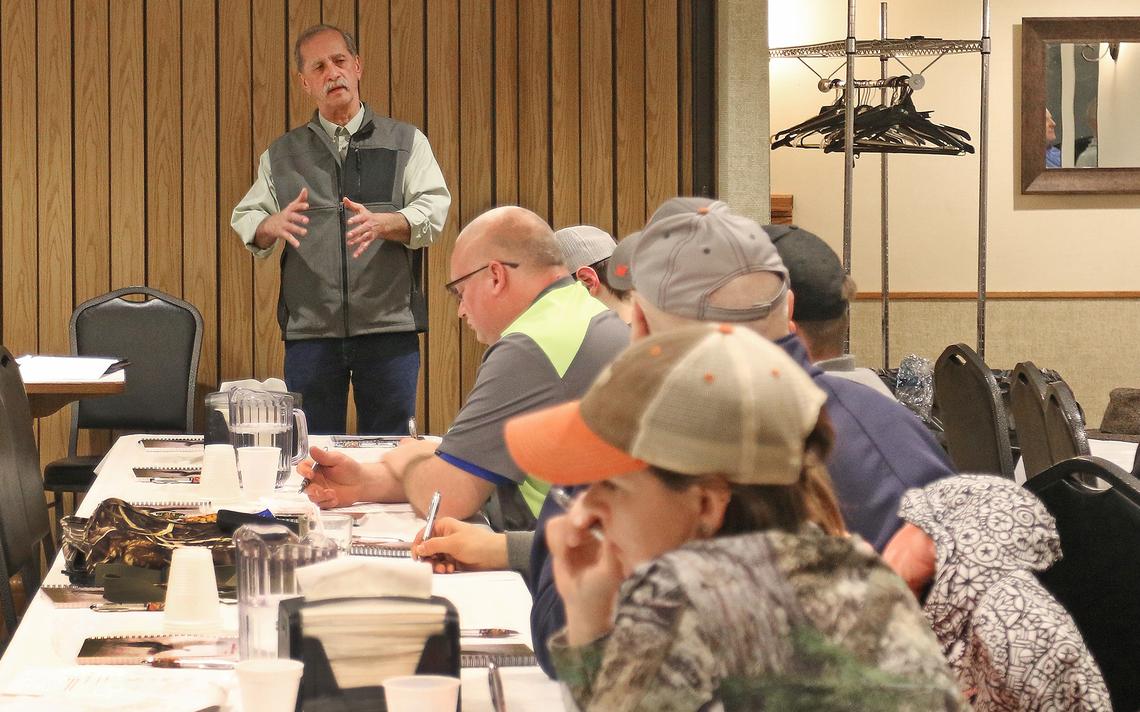 A Garrison, N.D., native, Steinwand earned his bachelor’s and master’s degrees from UND and first worked for the Game and Fish Department in 1976 as a seasonal aide at Spiritwood Lake north of Jamestown, N.D. He joined the department full-time in 1982 as a fisheries biologist for the Garrison Diversion Unit. He was named fisheries chief in 1989 and was first appointed as Game and Fish director Jan. 1, 2006, by then-Gov. John Hoeven, also serving under Govs. Jack Dalrymple and Doug Burgum.

A national search will be conducted for a new Game and Fish director, and an interim is expected to be named soon.

Steinwand talked about his 39-year career Tuesday, May 18, during a phone interview with Herald outdoor writer Brad Dokken. Here is an edited transcript of that conversation.

BD: What changes have you seen in terms of fish, wildlife and their habitat during your career?

TS: If you remember back from 1988 to ’92, we were in a pretty severe drought, and I hope we don’t go into it again, where we’re at right now. Those were some tough years, and when you look at it – fish populations, lakes and waterfowl – the two species that we were concerned with then and are concerned with at the current time, their populations dropped and there was real concern.

When I left the Fisheries Division in 2006, we were managing 185 to 200 lakes. We are up to about 420-425 lakes right now (because of) some wet cycles. But (fisheries crews) have done a great job of getting out there and making sure the public has access. It may not be the optimum or the maximum access, but they have access.

And then stocking those lakes. Back in the ’80s. If we got 1 million walleye out of the hatchery, we thought we were doing tremendous. Last year, they set a record with 12 million, and the guys want 13½ million this year.

We never really did have a fantastic state fish hatchery – we had one at Spiritwood Lake north of Jamestown, we just didn’t have rearing capabilities at that facility – and they do at the Garrison Dam and the Valley City hatchery. Without them, we would not have the fishery we have now. Getting that relationship and getting that partnership going is one thing I will always be proud of.

BD: Are there any developments or events that stand out?

TS: On the positive side, of course, the advent of CRP (Conservation Reserve Program), starting in 1986. That was a boon to our terrestrial wildlife populations and actually the water quality in our lakes to some extent, too.

On the negative side, zebra mussels coming into North Dakota – certainly not a good thing – but we have a couple of energetic young men working on that right now (aquatic nuisance species coordinator Ben Holen and ANS biologist Grant Kapaun) and doing a tremendous job.

Chronic wasting disease, having that come into North Dakota, is also a negative. Dr. Charlie Bahnson (the department’s wildlife veterinarian) is a tremendous vet. We got him out of one of the top notch wildlife health laboratories in the nation.

And of course R3 (recruit, retain and reactivate). We now have Cayla Bendel (the department’s recently hired R3 coordinator). I can’t say enough good things about her. She’s running everybody ragged, she has that much energy and she’s a very intelligent young woman. I expect good things out of her.

BD: The passage of SF2144, which allows for electronic posting of private land, recently was signed into law. That is going to change the hunting and access landscape, isn’t it?

TS: It absolutely will. That was one reason I stuck around (for the 2021 North Dakota legislative session). I wanted to see something come out, and (land posting) has been such a contentious issue.

There are going to be some glitches, there are going to be some stumbles along the way. You name another state that has (electronic posting), and you can’t because we are the first in the nation. But the other option was potentially losing everything, meaning everything shut down without even any (posted) sign. I think it was a great compromise between North Dakota Stockmen, Farm Bureau, Farmers Union, grain growers, you name it. That is really gratifying to me.

BD: It can’t happen very often where ag groups and sportsmen’s groups are on the same page on an issue.

TS: First time in my tenure.

BD: Was there anything that could have prepared you for managing the department during a pandemic?

TS: No, not at all. I don’t know if there was any place that had anything in the books to manage through a pandemic.

We were the only state last year that did the spring waterfowl survey. We’re one of the few that did it again this year during a pandemic.

We were the only state in the region that went out, our spawning crews, and collected all the (pike and walleye) eggs. We had a record for walleye production last year because our fisheries crew adapted to the situation, went out there and did the job that they love to do and got it done.

BD: You have to have thick skin in a position like yours, don’t you?

BD: Can you leave the job behind at the end of the day, or do you take it home with you?

TS: In a position like this, if you’re going to leave the job behind at 5 o’clock, you’re probably not the right person for the job. It’s demanding; I won’t say it’s 24/7, but we have weekend meetings, we have nighttime meetings, I’ll take phone calls at night, I’ll take mad calls at night, so you never really get away from the job, and I’ve enjoyed that.

I know what my responsibilities are, and I want what’s best for the fish and wildlife resource, as well as the hunters and anglers of this state. Making them – I won’t say happy – isn’t necessarily a responsibility or goal, but getting so they’re satisfied is a goal. I know I haven’t made everybody satisfied, but there’s not everything in my control either – very little, actually, in my control.

Well, what I love most about the job is the people working at Game and Fish and the public, working with the public. That really has been a gratifying portion of the job.

Worst part of the job? Working with the public. I say that semi jokingly, but like you said earlier, you need tough skin, and every once in a while, they’ll hit a nerve, and you go, “Geez, what could I have done differently on that?” And you think back on it, and sometimes there are some things we could have done differently, but I’d say 95% of the time, it’s “No, I’d follow the same course again.”

BD: What are your plans between now and July 31 in terms of your job as director?

TS: I plan on coming to work every day, working like I have for the past number of years. I still have a job to do and I’m going to do it to the best of my ability. I might take a few days of vacation here and there, but it’s not going to be any different.

Realistically, weather allowing, I plan to spend an awful lot of time on the water fishing. And last summer, for the first time ever in my career, I took a day off in the middle of the week and went fishing. Just an absolute gorgeous day and I’m sitting in the middle of a lake with just a little walleye chop, and I’m thinking, “Now this is heaven.”

I enjoyed the heck out of it, and I actually caught a couple fish, too. That’s actually when I started thinking about retirement.

My health overall is fine so that’s not a reason for retiring. The biggest reason is my grandkids are starting to grow up now, and I want to spend a little bit more time with them. They’re young yet, but I want to be a bigger part of their lives. And honestly, since college, I have not been able to get out hunting and fishing as much as I wanted to.