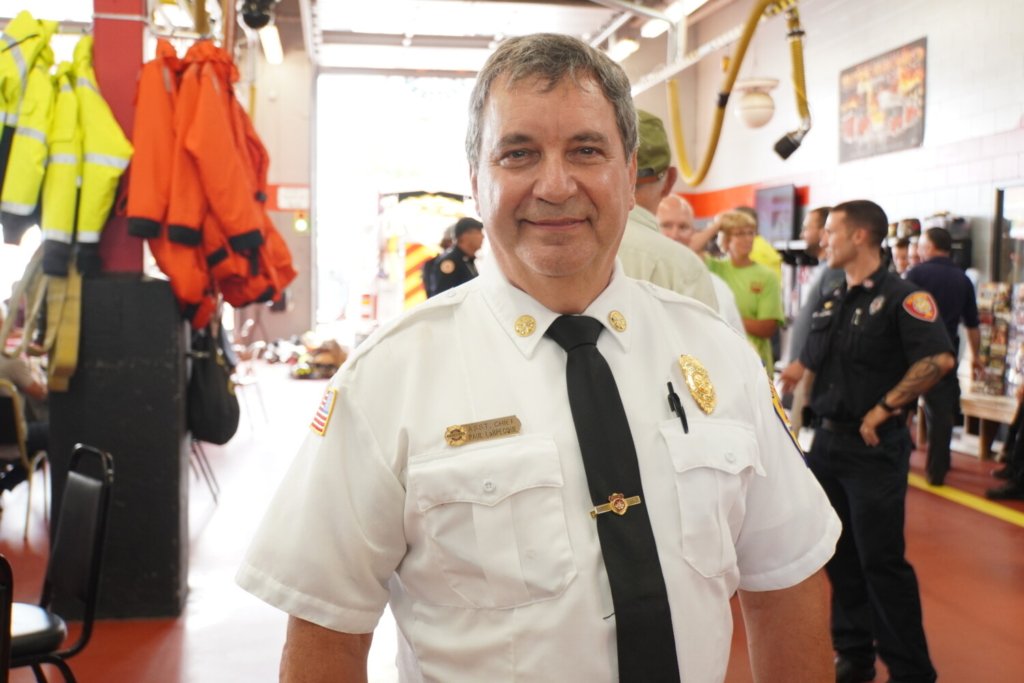 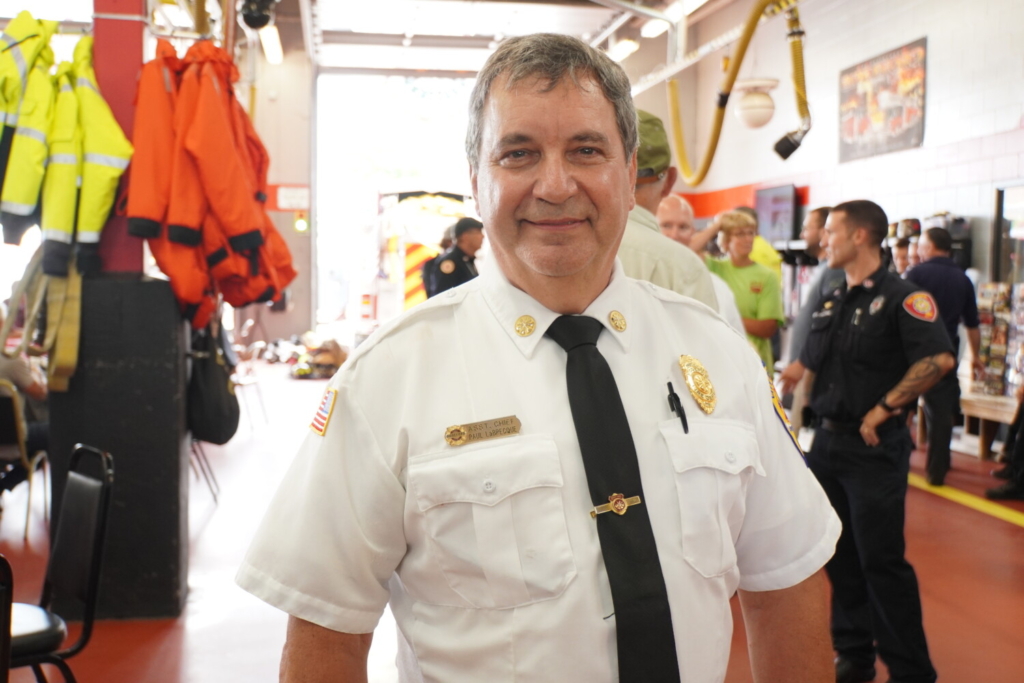 BIDDEFORD — Paul LaBrecque  was a call firefighter who worked days in the engineering department for the City of Biddeford when one day he got called into the fire chief’s office.

Fire Chief Emile Bergeron asked the young man if he would be interested in joining the department as a full-time firefighter.

LaBrecque was a bit surprised at the conversation, he said. This was the chief, asking him if he would be interested in a job.

“I was honored to be asked,” said LaBrecque. ” I accepted and he sent me to school.”

On Thursday, LaBrecque, who made his way through the ranks to assistant fire chief, retired after 42 years with the department. There was a party at the fire station, with many people in attendance — fire personnel, his family, members of other Biddeford city departments, Sen. Susan Deschambault, and firefighters from several neighboring agencies. 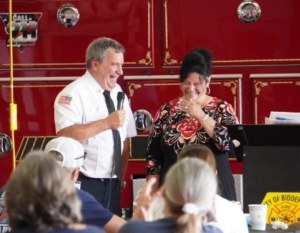 Biddeford Assistant Fire Chief Paul LaBrecque shares a laugh with his wife Christine during his retirement luncheon Thursday, July 15. LaBrecque served the fire department 42 years and worked in the city’s engineering department for a year prior to joining the fire service full time. Tammy Wells Photo

He was given a traditional  escort home in aerial truck 32. He chose that vehicle, reasoning he started his career in an aerial truck and would end it in one.

LaBrecque graduated from Biddeford High School in 1978 and was interested in drafting, architecture, and land surveying — not firefighting like his dad Raymond, a member of Biddeford Fire Department for 19 years.

LaBrecque joined the call force — even though he did not like heights. Then came the fulltime job.

In the end, it worked out well.

Ed Dexter, who recently retired from Portland Fire Department and who worked as a reserve police officer in Biddeford, was named the new assistant fire chief.

Mayor Alan Casavant, who retired from 35 years of teaching in his hometown a few years ago, noted LaBrecque was one of his students.

“What Paul has done at the fire department is exceptional,” he said. “You’ve been a good friend to the people of Biddeford,” he told his former pupil.

Deschambault read a legislative sentiment and noted the Legislature had passed “a lot of bills” regarding the work of firefighters. She presented a Maine flag that hung over the capitol in Augusta.

Biddeford firefighters, and those from Saco and surrounding municipalities salute Assistant Fire Chief Paul LaBrecque, who retired July 15 after 42 years with the Biddeford Fire Department. He’s shown here in the passenger seat of Truck 32, for his ceremonial ride home. Tammy Wells Photo

“He’s been a tremendous asset to our department, the fire department and the city overall,” said Police Chief Roger Beaupre.

“I’ve worked with Paul my whole career,” he said. “He mentored me on the way up and we worked together on the command staff.”

What’s next? Well, a summer off, helping care for his granddaughters, and then perhaps a part-time opportunity, LaBrecque  said.

“This is overwhelming,”  said LaBrecque of his retirement celebration. “I’m truly blessed to have so many friends. This has been an awesome career for me. I consider myself lucky.”

LaBrecque thanked his wife Christine for her support.

There were handshakes and backslaps, a few stories, and a lot of laughter from friends and colleagues. And then it was time to say adieu.

There was a ceremony outside, where firefighters lowered the American flag, folded it properly, and presented it to LaBrecque.

Then he was off for home, in the passenger seat of Truck 32.