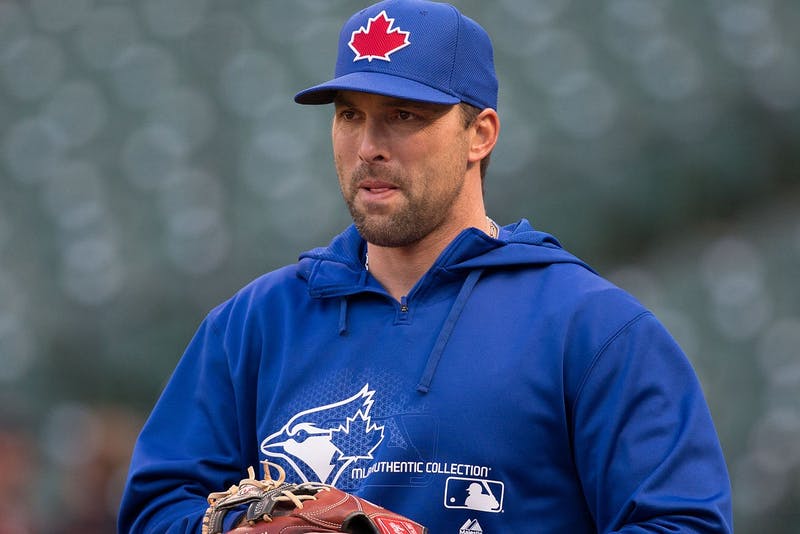 The 17-year MLB veteran became known for his ability to slide into any position and any role with virtually any team across the league and perform at a high level no matter the situation. But his adaptability was not a skill acquired during his time in the majors, or even during his tenure at Penn. Rather, it was evident in his pre-collegiate days, dating back to his youth.

Attending Bergen Catholic High School in New Jersey, DeRosa was awarded All-State honors for his play on both the diamond and the gridiron before starting his Penn career. While attending Wharton, DeRosa starred at shortstop for Penn baseball while also managing to earn the starting job at quarterback for the football team. In 1996, DeRosa decided to forgo his final years of collegiate eligibility—and a potential NFL career—and was subsequently drafted in the seventh round of the MLB Draft by the Atlanta Braves.

After two years in the Braves’ farm system, DeRosa made his debut for Atlanta in 1998, after which he would spend a few more years jumping back and forth between the majors and minors. His best years would not come in Atlanta, but in his time with the Texas Rangers, Chicago Cubs, and Cleveland Indians from 2005 to 2009. Over the course of those seasons he had a .278 batting average, slugged 88 home runs, and drove in 381 RBIs.

His later years were marked by injury and ineffectiveness, as a recurring wrist injury cost him the chance to compete for a World Series with the San Francisco Giants in 2010, with the team placing him on the injury list in 2010. He played three more seasons, which were mostly plagued by injury, although he did cross the 100-home run barrier in his final season, a fitting sendoff for a stellar career.

But his legacy is not limited to offensive stats. DeRosa would also spend seasons with the St. Louis Cardinals, San Francisco Giants, Washington Nationals, and Toronto Blue Jays, and over the course of his long and illustrious career, he would start at least a game at all but three positions on the field. Tuning in to a given game, you could never be certain whether you would see him manning virtually any spot in the infield or patrolling deep left or right field. He was the quintessential utility player, a high-level athlete and baseball mind who could do it all on the field.

As it turns out, he can do it all off the field, too. Since retiring with the Blue Jays in 2013, DeRosa has taken part in virtually every mode of MLB media. He appears daily as a studio analyst on the MLB Network’s flagship show, MLB Tonight, as well as MLB Central. He has written for the Players’ Tribune, and appeared on TruTV’s Impractical Jokers, a hidden-camera show.

However, today’s young baseball fans might be most familiar with DeRosa for his role in the world of video games. Since 2018, he has appeared as a commentator in professional baseball’s best-known and best-selling game, MLB: The Show. Just as he did as a player, DeRosa has sought out and achieved success in various capacities across the baseball world, proving his versatility—a utility player on the diamond, and now one off of it as well.