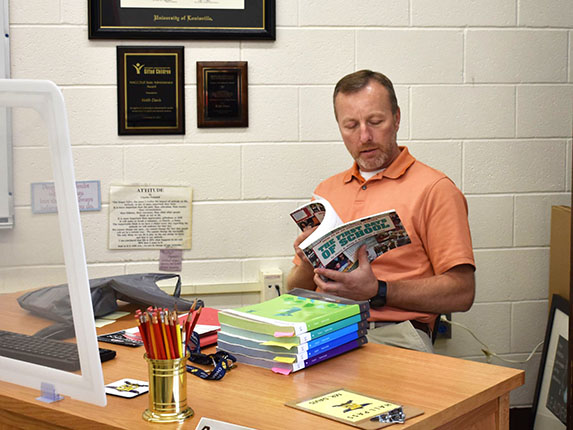 For almost 30 years, Keith Davis has been out of a public school classroom. But it wasn’t until he was on the brink of retirement that he realized he had more gas in the tank.

This fall, Davis is making his return to the classroom, teaching math at Frost Sixth-Grade Academy (Jefferson County). The school – comprised of only 6th graders – aims for every scholar to be successful, organized, achieving and respectful (SOAR) by being proficient in reading, mathematics and writing by the end of the school year.

After serving as superintendent until 2018, Davis decided to retire – until the University of Louisville picked him to work as an associate clinical professor, teaching principal and superintendent preparation courses.

Originally from Green County, Davis wasn’t sure what he wanted to do with his life until a college roommate piqued his interest in teaching. He knew he wanted to make a difference and decided education was his calling.

Davis said his experience of growing up in poverty motivated him to push through his education and make an impact on his students.

“In all of my jobs, there’s the idea that all kids, even those from less wealthy backgrounds, can achieve at high levels if given the right support, the right resources and the right people believing in them,” he said.

During his time at UofL, class discussions about equity, lack of resources for children in poverty and teacher shortages made Davis realize that he needed to put his words into practice once again. He decided to go back to teaching full-time in order to positively influence the lives of students.

“As I was sitting in my office at UofL, I was thinking, I’m talking about it rather than doing it when I could be doing it, so I applied to teach at a high-needs school. The opportunity at Frost came up and I took it,” Davis said.

Although he’s nervous about being able to connect with kids now that he’s older, he’s confident that he can still be the relatable guy he was over 25 years ago.

More than anything, he is excited to see if he can help his students achieve their goals.

“If I can come out after four or five years knowing that some of them, hopefully all of those kids, are going to have a better life than they otherwise would have if I were still at UofL, I can die happy,” Davis said.

In his free time, he has been renovating his house in southwest Louisville. He has two sons, both of whom are college students attending Morehead State University and the University of Louisville, respectively. He and his fiancée are planning to get married next year.