For Anchorage skier Sadie Maubet Bjornsen, retirement is two days and 30 kilometers away 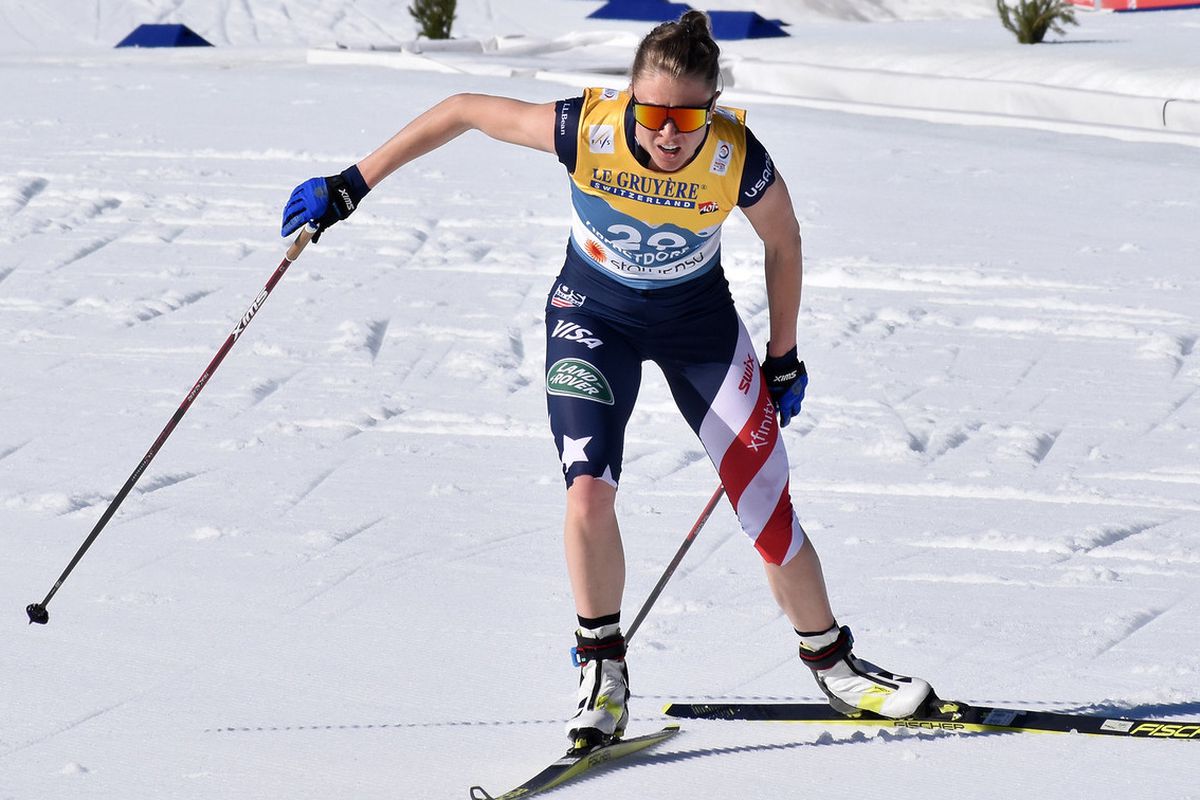 Sadie Maubet Bjornsen’s next race will be her last as a professional ski racer, the final moment in a decade-long career that includes nearly 200 World Cup starts, appearances in two Winter Olympics and seven World Championships, 11 World Cup medals, one World Championship medal and five consecutive seasons as one of the world’s top-16 skiers.

Bjornsen, a 31-year-old from Anchorage, will compete in Saturday’s 30-kilometer classic race at the Nordic World Championships in Oberstdorf, Germany.

On Monday, she’ll fly back to Anchorage and begin a new life as a recreational skier pursuing a career as an accountant.

Bjornsen announced her retirement publicly on Thursday, a few hours after she helped the U.S. Ski Team to a fourth-place finish in the women’s 4×5-kilometer relay. The American team — which also included Anchorage skiers Rosie Brennan and Hailey Swirbul and Minnesota skier Jessie Diggins — finished eight-tenths of a second out of the bronze-medal position.

Thursday’s race and what it offered — a shot at America’s first relay medal at a World Championship or Olympics — delayed her retirement by a year, Bjornsen said

“In all honesty, this is the reason I hung on for one more year,” she said after the race. “I feel like (last) spring and summer I danced around between trying to figure out if there was more that I wanted or if I was ready to be done.

“I just had this feeling that we had the strongest group of four women we have ever had, and I wanted to be a part of that. Hailey asked me what my goal was (last) summer and I was confused at that time, but I told her I had one goal — to be on the 4×5 team or make someone work damn hard for that spot.”

Teammates knew going into the race that it was Bjornsen’s final relay for Team USA.

“Our cheer last night was, ‘This one’s for Sadie!’ ’’ she said. “There’s definitely been some tears. When we crossed the (finish) line it was a big combination of the disappointment of being so close (to a medal) and knowing that it was the last time that I was going to be a part of it.

“So happy, sad and all types of emotions that were going on for sure. It was certainly an emotional race.”

Bjornsen’s decision to call it a career has been a year or more in the making. She made her World Cup debut at age 21 in 2011, and she was growing weary of living out of a suitcase for several months every year while competing in Europe. Plus, her life away from skiing was taking new turns.

She married Jo Maubet — a Frenchman whose sport is alpine skiing — in the summer of 2019, and her brother Erik Bjornsen retired from ski racing after the 2019-20 season. Erik’s retirement triggered thoughts of her own, she said.

“That’s the main reason I was thinking about retiring this spring,” she said. “Erik and I have always done it together and it didn’t feel right without him.”

At the same time, Erik and his wife — Marine Drusser, a former ski coach for UAA — urged Bjornsen to make sure she wasn’t leaving any unfinished business.

“They said try another year and do it different,” Bjornsen said, and that’s what she did.

She delayed the start of her current season till late January, which meant skipping several weeks of World Cup competition. Instead she stayed in Anchorage, trained with Alaska Pacific University under the direction of coach Erik Flora, competed in a couple of local races and then spent the holidays with her family in Washington for the first time in years.

Sadie and Erik Bjornsen are from Winthrop, Washington, and both came to Anchorage to ski for UAA. Both wound up leaving college skiing to pursue World Cup racing with APU’s nordic program and both competed at the 2018 and 2014 Winter Olympics.

The 2022 Winter Olympics in Beijing are less than a year away, and it’s unusual for an athlete at the top of their sport to retire in a pre-Olympic year. But Bjornsen said she’s satisfied with her Olympic experience.

“For the average (person) the Olympics is the most exciting sporting event in the world and for sure I think it’s so fun to watch and be a part of and to pull your stars-and-stripes uniform on,” she said. “One of my favorite moments was the night before the classic sprint race and I was talking to Erik Flora and he said, ‘Sadie, just take a second to recognize that you think you can win an Olympic medal tomorrow. Whether you win or not, there are so few people in your position now.

“I still think that’s one of the coolest moments ever.”

Among Bjornsen’s career highlights was winning the bronze medal in the team sprint with Diggins at the 2017 World Championships. The next season, she finished sixth in the overall World Cup rankings — her highest ranking ever. She ranked 14th overall in 2019 and eighth overall last season.

She’s leaving while still at the top of her career, despite the temptation of another Olympics.

“The Olympics are amazing but it is literally one snapshot in a video,” she said. “I never wanted my career to be defined by that snapshot. Ski racing is so much more than that single picture.”

Bjornsen said she’s leaving ski racing with no regrets — and with excitement about the future. She spent last summer working at an accounting firm in Anchorage and recently passed her CPA exam. Ski racing is her first love, she said, but she’s ready to embrace the challenge of life after ski racing.

But first, one more race.

“It’s a bag of emotions,” she said. “I want time to slow down, because I want to soak in every last moment of these experiences and emotions. Our staff is very international, so I don’t know that I’ll ever see them again, yet they’ve played such a huge part in my life. I want the next two days to go really slow.”