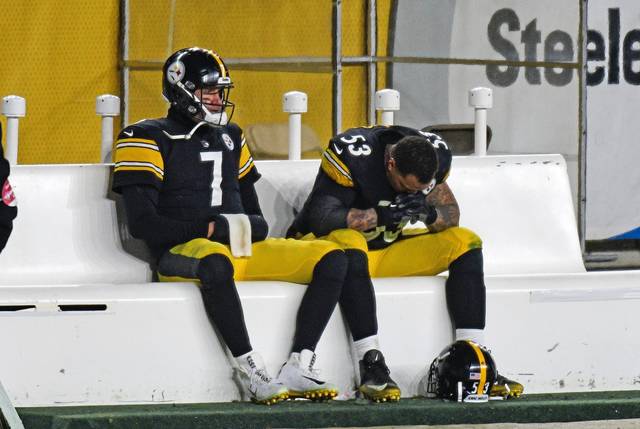 Former Steelers wide receiver Hines Ward is up against some longshot odds of getting into the Hall of Fame. How seriously did Ben Roethlisberger consider retirement last winter? Some Baltimore Ravens are banged up, and we rank the AFC North wide receivers.

All of that in Tuesday’s “First Call.”

Steelers owner Art Rooney II recently said it isn’t “written in stone” that this will be the final season with Ben Roethlisberger as the franchise’s starting quarterback.

Apparently, it wasn’t written in stone that Roethlisberger was coming back for 2021 either. But Big Ben always seemed to have a chisel in hand.

During a recent interview with Mark Maske of the Washington Post, Roethlisberger admitted he had some moments when retirement jumped through his mind — especially when he was considering joining friend and former center Maurkice Pouncey in post-football life.

But it sounds as if Roethlisberger was always fairly sure he’d give the NFL at least one more go in 2021.

“I couldn’t say 100 percent there wasn’t ever a moment (when he considered walking away),” Roethlisberger said. “When I talked to Maurkice Pouncey and we talked about things together, I’d say that there maybe were moments. But I felt pretty certain after praying a lot about it and talking with my wife and my agent and the people closest to me. I felt pretty confident that I still had something in the tank and still wanted to go out and be a part of this team that I feel is pretty special.”

Hmm. “I couldn’t say 100 percent there wasn’t ever a moment.” Is that a triple negative? Does that make it a positive? Make it neutral? I’m not sure.

I think the takeaway here is that Roethlisberger briefly considered retirement. But it never took hold. And his actions to moderately rework his contract and remain under center for 2021 support that theory.

Odds are out for the 2021 Pro Football Hall of Fame class. And they aren’t great for former Steelers wide receiver Hines Ward.

Make it six if you want to include former Chicago Bears/Atlanta Falcons return specialist Devin Hester (1/1). Only Holt and former Dallas Cowboys/Denver Broncos pass rusher DeMarcus Ware (2/3) are in front of him.

When it comes to the AFC North, the Bengals finally finished first in something — NFL.com’s wide receiver rankings.

Yup, Cynthia Frelund ranked all 32 NFL receiver groups. She had the Bengals No. 8 overall.

Tee Higgins was impressive as a rookie with 908 yards, 67 catches and six touchdowns. Pitt product Tyler Boyd was decent. But his catches (79), yards (841), touchdowns (4), first downs (43) and average yards per catch (10.6) were all down from the year before. Granted, that was probably because of Higgins’ infusion into the offense.

And Frelund must be high on No. 5 overall pick Ja’Marr Chase as he reunites with fellow LSU alum Joe Burrow at quarterback.

The Steelers came in third in the division and 19th overall. Obviously, last year’s drop fest must’ve hurt their ranking because personnel-wise, the combination of Chase Claypool, JuJu Smith-Schuster, Diontae Johnson and James Washington deserves to be ranked higher.

The Baltimore Ravens came in last among the AFC North teams at 23rd overall. That must be a surprise for Sammy Watkins, who recently said he thought the Ravens pass catchers (Watkins, Rashod Bateman, Marquise “Hollywood” Brown, Miles Boykin, Devin Duvernay) could become “one of the best” in the NFL.

Speaking of the Ravens receivers, they are banged up.

According to The Athletic’s Jeff Zrebiec, “Of their 9 healthy WRs, only 3 of them have an NFL catch and (James) Proche has only 1 reception.”

Check out this M*A*S*H unit.

Leaves a group headed by Sammy Watkins, Devin Duvernay and James Proche.
Other WRs on roster are Jaylon Moore, Devin Gray, Tylan Wallace, Siaosi Mariner, Binjimen Victor and Michael Dereus.
Of their 9 healthy WRs, only 3 of them have an NFL catch and Proche has only 1 reception https://t.co/HV57ZiX8Vi

Although Zrebiec did add that “Marquise Brown has been doing conditioning work on an adjacent field and he’s moving around well.”

Tim Benz is a Tribune-Review staff writer. You can contact Tim at tbenz@triblive.com or via Twitter. All tweets could be reposted. All emails are subject to publication unless specified otherwise.