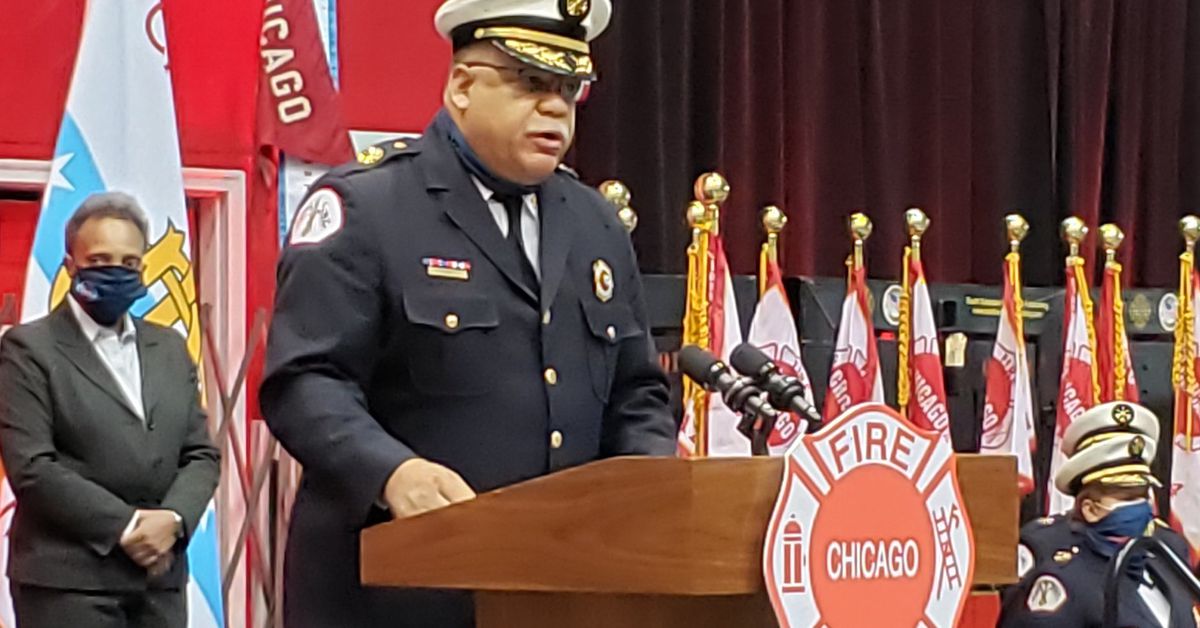 A wistful Chicago Fire Commissioner Richard C. Ford II presided over his final graduation ceremony Tuesday before he reaches the mandatory retirement age of 63 that will force him to step down in April.

Mayor Lori Lightfoot has spent the last several months searching for Ford’s $217,728-a-year replacement. His last day on the job will be April 2.

The retiring commissioner didn’t dwell on the changing-of-the-guard during Tuesday’s graduation ceremony at the Robert J. Quinn Fire Academy, 558 W. DeKoven St. that was another eerie, socially distanced affair, due to the coronavirus pandemic.

He simply delivered what amounts to his swan song to the latest class of 125 firefighter-EMT’s.

“I have enjoyed 30-plus years serving this department and it has been an honor and a pleasure to be your fire commissioner. You will be the last graduating class that I address. And I swear to you, I don’t know where all of those decades disappeared to. But I can remember it just like yesterday standing in the same positions you are now and going, ‘Wow, it’s my turn,’” Ford told the graduates.

“Every exempt member, every chief on the fire department began exactly where you are now. We were all anxious, excited and, if I’m being really honest, a little nervous until that first call came in. But if you remember to … trust your training, everything will be fine. You’ve been trained by the best to be the best. … You are the next generation of leaders.”

Of the 125-member graduating class of firefighter/EMTs, 85 are white, 18 are Black, 19 are Hispanic and three are Asian American. Seven are women, 27 are members of the military and 24 are graduates of Chicago Public Schools.

“Eighteen of you have turned your tasers and firearms in as police officers in exchange for face-pieces and bunker gear. And 14 of you have decided to come over from the Chicago Police Department after originally being misguided in your attempt to be a real first-responder,” Ford said.

As he always does, Ford reminded the rookies to treat those they serve with the same “professionalism and compassion” they would demand for themselves and their own loved ones.

Although they did not “sign up to be role models or heroes,” that’s precisely what they represent to the Chicago residents, employees, visitors and businesses they serve, he added.

“That’s what you represent when you roll up on a six-year-old trapped in a car or you go into a burning building where there’s a veteran trapped in a wheelchair. You are their hero. You represent strength, courage and hope,” Ford said.

Lightfoot told graduates they were joining the ranks of firefighters and paramedics who “dug in their heels, remained at the front lines” and “never let us down” during the year-long battle against the “invisible threat” posed by the coronavirus.

“Today, each of you will join the ranks of these brave men and women. … For many of you, that work starts tomorrow. … You’re starting your job when we are recovering from one of the most historic snowstorms that we’ve seen in quite a time. So the needs will be many,” she said.

Jim Tracy, president of Chicago Firefighters Union Local 2, has acknowledged he and Lightfoot are “miles apart” on a long-term contract. He’s made a strong case for maintaining the minimum staffing rule that requires at least five employees for every piece of fire apparatus.

Asked Tuesday who should replace Ford, Tracy texted: “I have no idea. I haven’t been included in any discussions with the city. In fact, they haven’t notified Local 2 about our last three candidate graduation classes. One of which was this morning.”

Lightfoot has vowed to confront the thorny issue of CFD staffing levels and reconcile the number of firehouses in Chicago with a decline in fires and a surge in ambulance calls.

With negotiations almost certain to turn contentious with a union that gave her a pivotal endorsement during the mayoral run-off, the mayor may want a replacement from outside the department, as she did in Chicago Police Department Supt. David Brown, a retired Dallas police chief.

Interviewed by the Sun-Times last May, Lightfoot refused to tip her hand, saying only that she was “very well aware” of Ford’s April mandatory retirement date and planned a “smooth transition” to a replacement “worthy of leading one of the best fire departments departments in the country.”

If Lightfoot chooses a new fire commissioner from inside the department, the leading candidate would appear to be First Deputy Fire Commissioner Annette Holt. She is the first woman ever to hold the No. 2 job in a department long known as a bastion of white males.