Crossing into retirement in Lynnfield 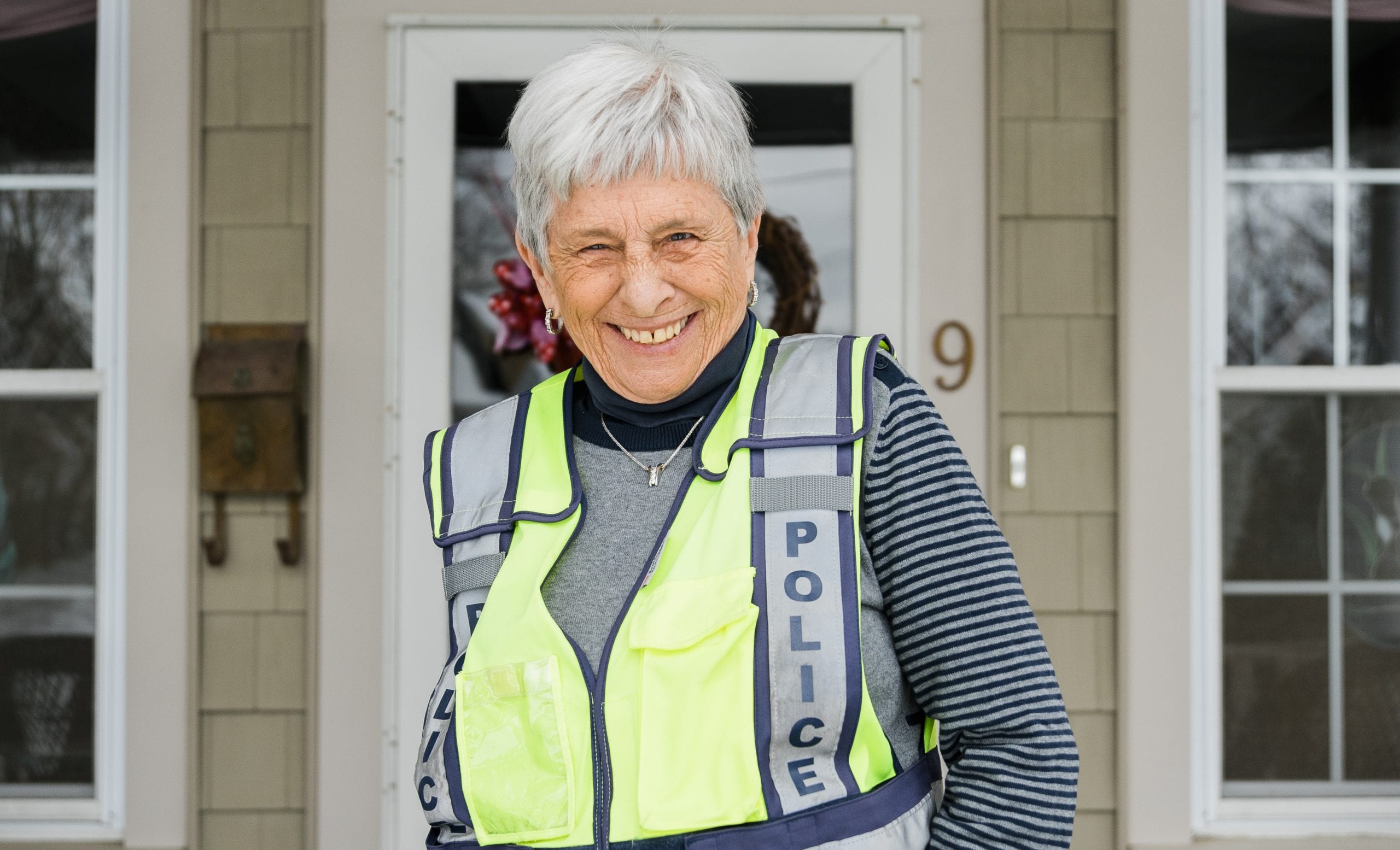 Carol Kilroy has retired after being a Lynnfield crossing guard for the past 42 years. (Spenser Hasak)

You have 4 free articles left this month.

From dressing up as a witch on Halloween to tying shoelaces and fixing bicycles to administering first aid — always with a little tender-loving care — to even helping a student in tears after losing a rock in the middle of the street, Kilroy has seen it and done it all.

“There’s no real job description and I learned early on that it’s a little bit of everything, but the most important part of my job was safety,” Kilroy said. “I was a very strict crossing guard, in part because I hated having to write up reports. Shoes had to be tied, otherwise you couldn’t cross. Other things had to be practiced over and over.”

Kilroy said she enjoyed every minute and has so many fond memories, many of which she said probably “aren’t fit for print.” At times, her duties and her kindness left her speechless.

“At the middle school there were 99 students and the kids were always saying, ‘Thank you and have a nice weekend’ or ‘thank you, have a nice night.’ By the time they all got across, I was just parched,” she recalled.

She remembers a funny incident at Huckleberry involving an 85-pound Golden Retriever that broke loose from its owner.

“The dog loved people, but she never came near me because she would get too excited,” Kilroy said. “One day, though, she broke loose and bolted into the street. People said she was going to bowl me over, but all of a sudden she just stopped, sitting on my left foot in the middle of the road.”

“I asked her why she was crying and she said her teacher had given her a rock and she dropped it,” Kilroy said. “I said, ‘let’s go back and see if we can find it,’ and by the grace of God, we recovered it.”

Greenwood Road resident Ann Powers said she walked her two boys (now age 23 and 21) to Huckleberry every day, sometimes with a shovel in her hands if it was snowing.

“We developed such a great relationship with her, and really, she had such wonderful relationships with all of her walkers,” Powers said. “She was just a great person who truly loved what she did and really took care of so many children.”

Dressing up on Halloween at the middle school served multiple purposes, according to Kilroy.

“It was always good as with everybody being so grumpy because there was so much traffic, it helped make people smile and be a little happier,” she said.

“Originally, my (late) husband, Arthur, volunteered me,” Kilroy said. “He was on the fire department at the time, but I have no idea why he volunteered my name. I guess it was just one of those things and that one thing turned into 42 years.”

“I think it was just time to say, ‘It’s time.’ I mean, the pandemic has affected everyone, so I guess it’s my turn to say good-bye,” she said.

Over the course of her career, Kilroy has seen her kids become parents, and now, she is helping their children.

“I’ve met so many wonderful kids and parents, so it’s been absolutely unbelievable as over time you develop relationships and you truly bond with them,” she said.

One of the persons Gilroy developed a special relationship with was Charlotte, also known as Charlie.

“At Huckleberry, the sidewalk goes into the street so you have to stop at a telephone pole before crossing,” Kilroy said. “Charlie always wanted to be the first, so she would get to the pole and stretch her arms out so nobody could cross. I told her she was my assistant.

Kilroy’s first day on the job was a challenge.

“My first day as a matron — that’s what they called it — was to go to Logan Airport to pick up a runaway.”

Kilroy’s stations have varied over the years and include the former Center School (the current site of L.I.F.E.’s Center Village), the South School (now the Senior Center and home of the school department), Summer Street and Huckleberry Hill elementary schools, and the Lynnfield Middle School.

“In the beginning, I just went when I was needed,” Kilroy said. “Eventually, my permanent station was on Summer Street at Forest Hill Avenue. The most challenging station was at the middle school on Main Street.

“The volume of traffic was tremendous and that made for all sorts of difficult situations, considering that and the number of kids.”

Kilroy spent her first two years in Peabody before moving to Lynnfield after her parents built their home. She attended the Center School through sixth grade, then moved on to the South School for about a year and a half while the old middle school was built.

“My class was the first ninth-grade class to go to the middle school,” Kilroy said, adding she has fond memories of the school.

“Don’t knock the old middle school,” she said. “Back then, in the dark ages, they built things to last. Junior High was fun because everyone knew each other and the classes were small. Also, that was before everything became so specialized and before there were so many electives.”

Kilroy graduated from Wakefield High School then worked as a statistician at the American Mutual company in Wakefield. After marrying, they settled in Lynnfield on Parsons Avenue to raise their two children.

“I’m still in the home I shared with my husband near the Fire Department. It used to be a short, dead-end street when neighbors were real neighbors. We would have been married for 60 years last year. (Arthur Kilroy died in 2013).”