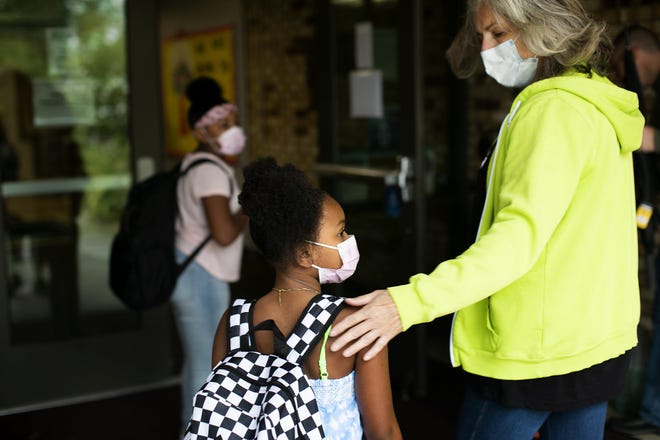 When the coronavirus pandemic began in March 2020, John Wilson, like so many educators, had to quickly adjust to working from home as schools shut down across Ohio and the country.

The high school social studies teacher learned how to transition to virtually teaching his 75 students at Madison Christian School in Groveport from his home office. By the end of April, however, Wilson, 64, was ready to retire a year earlier than he had planned.

“I have an autoimmune disease, so I take immunosuppressive drugs,” he said. “And it’s just like, ‘No, I’m not going to go back into the classroom again.'”

Wilson’s health worries echo the concerns many educators are experiencing as they work through the pandemic, according to a June study published by The RAND Corporation, a nonprofit research organization based in Santa Monica, California.

The survey states that mode of instruction and health were the highest-ranked stressors for teachers and that pandemic-era teaching conditions — such as technical problems while teaching remotely — were linked to job-related stress, depressive symptoms, and burnout.

In addition, a survey from the National Education Association found that 32 percent of respondents said the pandemic has led them to leave the profession earlier than they anticipated. That’s a slight increase from summer 2020 when NEA found that 28 percent of members said they may leave or retire early.

It’s been a trend across the country — from Michigan to California to Alabama.

In Ohio, about 3,700 school employees retired during fiscal year 2021, which ran from July 1, 2020, to June 30, according to State Teachers Retirement System of Ohio spokesman Nick Treneff.

Treneff said STRS does not ask teachers the reason why they retired. However, he believes the increase is due to the change in eligibility requirements that were part of the pension reform package passed by state legislators in 2012. This gradually increased age and years of service requirements for teacher retirement starting in 2015. July 1 was the deadline for employees to retire with 33 years of service or more.

Columbus City Schools, the state’s largest district, seems to be bucking the general trend, however. Data shows that there were only 21 retirements for fiscal year 2021. For 2020, the number of retirements totaled 51, with 2019’s figure at 78 teachers.

Columbus Education Association President John Coneglio believes having a younger workforce may have played a factor in the lower retirement rate.

“If you have a younger workforce, that could be the reason why you’re not seeing people exiting,” he said.

More:How many COVID-19 cases have been reported in your Columbus-area school district?

‘I didn’t want to be in that situation’

Wilson was a teacher for 17 years, with the majority of his career spent at the private school OneSchool Global at its former location in Pataskala. In 2017, the Columbus resident began teaching at Madison Christian.

During his time at OneSchool, he taught in-person and virtually to students who attended the school’s other campuses across the country. Wilson said his experience with online learning gave him an advantage when Madison Christian switched to virtual learning during the pandemic.

But he wasn’t interested in teaching online full-time, and Wilson said he did not want to take the risk of teaching in-person the following school year since he has rheumatoid arthritis. According to WebMD, rheumatoid arthritis raises a person’s chances of getting any kind of infection, with the illness likely to be more serious when one’s arthritis is active.

“So, it really wasn’t a tough decision for me,” Wilson said. “It was, ‘You know what? I think something is telling me its time.’ And I was perfectly comfortable with the decision.

“Later that summer is when they (Madison Christian) announced they were going to be fully in-person, but everybody was going to be masked. And that’s fine, but that’s why I decided to retire. I didn’t want to be in that situation,” he said.

What Ohio Education Association President Scott DiMauro is seeing is consistent with Wilson’s experience and the findings of the NEA study: Educators are retiring early or leaving the profession entirely.

The biggest reasons are concerns about their health and safety due to the pandemic, he said. But there are also the challenges and stress that teachers experienced last school year with schools going back and forth between remote and in-person learning. DiMauro said the pandemic is especially hurting teachers of color, who are more likely to retire early.

“When the pandemic started, teachers did that very quickly and with very little time to prepare,” DiMauro said about the switch to virtual schooling. “So, that was definitely stressful. Throughout the year, regardless of whether people were teaching in person or remote or hybrid, there was a lot of uncertainty… there were large numbers of students who were absent, you had all these quarantines. And so, that creates really stressful conditions for teachers. And that, frankly, burns people out.

“We have a lack of subs, which means that our teachers are covering classes that they normally wouldn’t have to cover, which is adding stress to them because they’re not getting their planning time, their conference period.”

Another reason for retirement DiMauro cited is the rising tension between parents and school districts on mask mandates and other safety guidelines.

At a Marion City Schools meeting last month, a discussion about mask requirements turned into a few parents yelling at school board members. And there have been protests in New Albany, Hilliard and Worthington, with parents and others arguing for or against mask mandates.

COVID-19 in schools:Tensions heat up in school mask debate as parents take a stand

DiMauro said the pandemic is affecting teachers everywhere in the state — in urban, suburban and rural districts.

“They just don’t feel supported in the way that they need to be supported in order to continue doing the important work,” he said. “So we’re trying to provide, through our union, a means that people do feel connected and supported by one another and they feel empowered.”

Congelio said he already is seeing stressed-out teachers at Columbus City Schools, even though the school year only started a few weeks ago.

“We knew it was going to be a difficult year because our teachers haven’t been in front of a full classroom for 18 months,” he said.

While there were some teachers who did retire due to the pandemic, fears of a mass exodus of retiring teachers may have been overblown, reported USA Today last year.

In Tennessee, 1,307 teachers had filed retirement applications through September 2020, state records show. That figure is was down 31% from the same period in 2019.

And in Indiana, another state that reinstated in-person learning early, the 1,572 teachers who retired through September 2020 represent a 5% decrease from the number who retired in 2019, according to the Indiana Public Retirement System.

Treneff said while there was an increase in retirements for Ohio educators this year, he has seen years where the number of retirements were even greater.

In the summer of 2020, Clyde resident Scott Prunty was one of those who decided it was time to retire.

The 58-year-old worked as an adapted physical education teacher at North Point Educational Service Center in Sandusky for 23 years. Specifically working with special needs students, Prunty would travel to about 12 schools a week in cities across northern Ohio. In total, he taught around 120 students.

“That really played into the whole COVID decision,” he said. “I did not see a safe way to go to 12 different schools every week and not pass things on to vulnerable kids.”

Prunty said teaching physical education virtually was “pretty weird.” He made a few exercise videos, but mostly used resources from other websites or had students participate in a scavenger hunt or fill out an activity log.

“There are some really good videos out there that PE teachers have put together, but PE Zoom is just not going to be the same no matter how hard you try,” Prunty said.

Prunty said deciding whether he was going to return for the 2020-2021 school year brought him anxiety, since many of the schools he taught at were going back in-person full-time. His top concern was implementing masks and social distancing effectively in his physical education classes.

“Basically, it came down to: I don’t want to ever feel like I got a student sick, that I transferred something around,'” Prunty said. “So, last July, I just said, ‘I can’t … I can’t go back.”