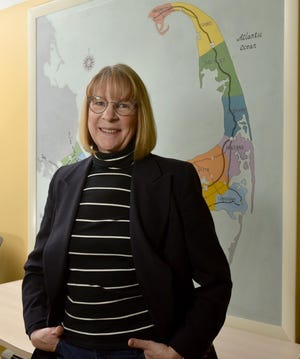 CENTERVILLE — When Wendy Northcross arrived at the Cape Cod Chamber of Commerce offices in April of 1997 to begin what had been promised as a one-year term as interim executive director, she found what she called “a very tired chamber.”

Northcross was fresh off a one-year stint setting up Coastal Community Capital, a community development lender, when the county asked her to take the helm of the chamber as it merged with the Barnstable County Economic Development Council.

“They said ‘Wendy, it’s just a year. Just keep the lights on,” said Northcross, 66, who announced her retirement Monday after 24 years as the chamber’s CEO.

The organization was mired in debt. There were holes in the floor. A bulky photocopier stood in the middle of the room, surrounded by desks and dated office furniture.

“The staff was demoralized because the executive director had been under fire for a couple of years,” Northcross recalled.

She sat down with each employee and asked for ideas. Nothing was too mundane or too small, including one suggestion to rid the basement of mice. It was the start of a process that would revitalize the chamber and expand its mission far beyond tourism, motels and restaurants to the interplay between the Cape economy and the region’s social, environmental and municipal issues.

Northcross said she had intended to retire at 65 to spend time with her husband, Van, and their two granddaughters, but realized she wasn’t quite ready. Nearly two years later, with a lot of the major issues like wastewater, the bridges, sharks and the blue economy reaching a point where they had enough momentum, Northcross decided it was a good time to step away.

“Cape Cod is a better place because of Wendy Northcross,” said state Rep. Sarah Peake, D-Provincetown. “Whether you are talking the environment, the economy, COVID-19 and public health, and of course tourism, Wendy is a big thinker. She is well-respected statewide and she is trusted statewide from the executive branch, to the legislature, to her peers and colleagues across the Commonwealth.”

Peake praised Northcross as a creative thinker with a broad view of the chamber’s mission that went way past crafting good advertising campaigns to draw people to the Cape.

“Wendy distinguished herself in the world of Chamber of Commerce executives as having a strong, intuitive understanding of development and its environmental impacts,” said Andrew Gottlieb,  executive director of the Association to Preserve Cape Cod. “She sees connections others don’t. She’s extremely well thought of within legislative and administrative circles. Having her voice at the table enabled us to do something we wouldn’t have been able to without her.”

Gottlieb, who sits on the chamber’s board of directors, was referring to the Cape and Islands Wastewater Trust Fund, a 2.75% add-on to the region’s short-term rental tax that created a dedicated funding source for our multibillion-dollar wastewater cleanup of coastal and inland water bodies polluted by nitrogen and other contaminants from septic systems, road run-off and fertilizers.

“We have that wastewater funding mechanism in place largely because of the brainstorming we did with Wendy and her team at the Cape Cod chamber,” Peake said.

It may seem antibusiness to add fees onto rentals, but Northcross sees the environment, water quality and housing issues as vital to the tourism business.

“How can you continue to invite people to enjoy your beautiful place if it’s polluted, poorly managed, or doesn’t support the workforce?” she said.

Still, the chamber’s prime mission is business promotion, and the organization now has 1,200 members that span all sectors of the Cape Cod economy. Its board of directors includes members from banking, real estate, transportation, healthcare, museums, restaurant, affordable housing, environmental advocacy and research and builders.

“Tourism and economic development don’t just happen,” Peake said. “You have to study it, stay on top of it and Wendy has never taken her eye off the ball when it comes to supporting local businesses. She’s always thinking of ways to grow and diversify our economy.”

Peake cited the chamber’s advocacy for expanding broadband access, efforts to grow the tourist economy, especially in the shoulder and off-season, and the focus on the region’s maritime economy.

Northcross first came to the Cape to visit her grandparents when she was 2.  After her parents divorced, she moved here permanently from Michigan with her mother at age 13.

Upon graduating from Dennis-Yarmouth Regional High School in 1972, she got an associate’s degree in business and went to work. She served eight years as the executive director of the Greater Hyannis Chamber of Commerce, one year as the executive director of Coastal Community Capital and nearly 24 years as the CEO at the Cape Cod Chamber of Commerce.

During her tenure at the chamber, she saw changes: the 19,000 bedrooms, mainly hotels, motels, and weekly rentals in 1997, are now 10,000 bedrooms in those categories with another 19,000 in online short-term rental properties.

“Airbnb told us when we met with them recently that we are in the top five rental markets for them in the country,” Northcross said.

She’s had more than a few laughs, including visitor questions like, ‘Is there sand on the beaches?’ and ‘Do ticks fall from sky?’

For decades, it’s been a 90-hour-a-week job, with a lot of sleepless nights the past year helping Cape businesses survive a pandemic. Northcross is not retiring right away but will remain for a few more months to help with the transition as the organization finds her replacement. She’s shooting for the end of June as a possible date.

If that happens, what will she do on July 1st?

“I’ll probably sleep in,” she said, although she is active in many volunteer organizations.

Depending on the state of the pandemic, she and her husband are planning to visit their granddaughters in Maine and her stepmother in Arizona.

“It’s time to spend time with family,” she said.