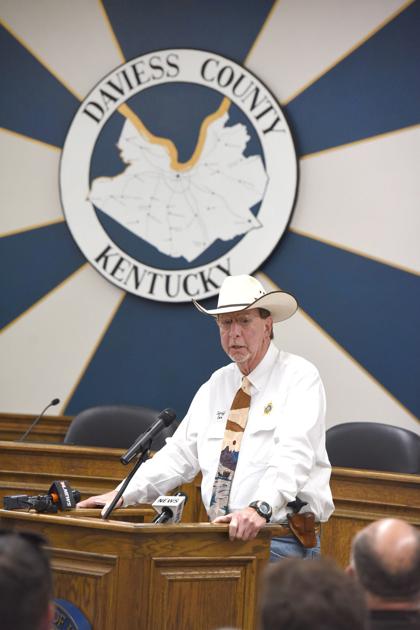 After a law enforcement career spanning 48 years and six consecutive terms as Daviess County sheriff, Keith Cain announced he will be retiring at the conclusion of his current term next year.

Cain made the announcement during a press conference Wednesday at the Daviess County Courthouse.

“To be elected to one term back in 1999, my first term, I will tell you was the realization of a career-long dream for me,” Cain said. “To be chosen your sheriff subsequently for six consecutive terms, simply put, is humbling.”

Cain’s service with the Daviess County Sheriff’s Office began after he returned to Owensboro after serving in the U.S. military in Vietnam when his dad encouraged him to look for a job with the sheriff’s office.

During the course of Cain’s career, he has remained loyal to the Daviess County Sheriff’s Office, serving as a deputy, chief of detectives and chief deputy before being elected sheriff in November 1998. He was subsequently re-elected to office in 2002, 2006, 2010, 2014 and 2018.

“After much prayer, council with family, friends and colleagues, culminating with a 48-year career in this sheriff’s office … I decided I will not seek another term as sheriff of Daviess County,” Cain said. “I want you to know that this decision was not taken lightly nor was it easily reached but I am confident that it is the right decision.”

While the decision to retire wasn’t an easy one, Cain said there was nothing difficult about the decision to formally endorse Chief Deputy Barry Smith, who announced his candidacy for Daviess County sheriff during the event.

“The question that you may ask is why would I endorse anyone without knowing who may follow and run for sheriff,” Cain said. “The reason is very simple. It is because no one, no one, is more prepared to become your next sheriff.”

Smith has served with the sheriff’s office for 27 years, has the experience and necessary qualities to lead the next chapter of the Daviess County Sheriff’s Office, Cain said.

“Barry has been with the sheriff’s office the entirety of his adult career, rising from patrol deputy to his present position as chief deputy and I can attest that there isn’t much that he hasn’t seen or encountered during those years,” Cain said.

Smith then addressed a full crowd assembled in the fiscal court chambers of the Daviess County Courthouse.

“For the last 27 years, I have worn this brown uniform and devoted my life to the Daviess County Sheriff’s Office,” Smith said. “My career is more than a job, it became a passion.”

Cain said the decision to retire next year was made easier by the fact that Smith would be launching a campaign to succeed him as sheriff.

If elected as the next sheriff, Smith said his goal would be to adapt to the constant changes and evolutions of society and continue to provide the residents of Daviess County with the service they have come to expect from the sheriff’s office.

“While the sheriff is an elected position, I am not a polished politician,” Smith said. “What I am is a career deputy sheriff and I have refined the trade from some of the best and grown through the ranks of the office.”

Cain also took the opportunity to thank his staff and community members for their support through the years.

“I will forever be grateful for the opportunity to be able to give back to a community that I have lived in my entire life and that I called home,” he said. “I found nothing more satisfying, nor more worthwhile than to give back to the people that have given so very much to me and my family.”