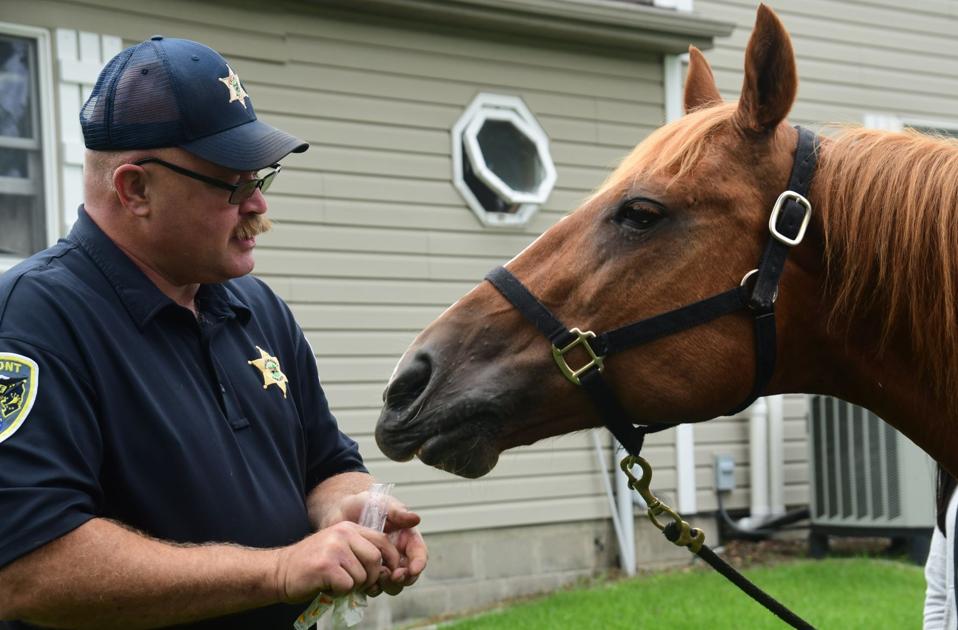 FREMONT — Since the early 2000s, Marshal Joe Patterson, now of the Fremont Police Department, has had his trusty red mare, Bunny, by his side.

Now 23, Bunny, an unregistered quarter horse, is beginning to show her age a bit and Patterson said it’s time for her to start living the good life in retirement on the farm, carting the youngest of the grandchildren around.

“She taught me how to ride,” Patterson said. “I didn’t know how to when we got started.”

Bunny was born on an Easter Sunday, hence her name, though she’s not always sweet and cuddly like her name would suggest. Patterson said she’s definitely got a spicy attitude about her and she knows when her police gear is on, it’s time to be serious and get down to business.

He considers each of his horses gifts from the divine.

“They are definitely gifts from God,” he said. “I’ve been blessed over the years to have them in my life and to be able to share them with others.”

Patterson and Bunny got their start together when he was on the Hamilton Police Department, with their first real duties happening around 2003, he said.

“Hamilton and Fremont both have been really good to us,” he said.

When he took the job in Fremont, he brought Bunny along too.

Having a police horse isn’t as simple as pulling a horse out of its pasture, slapping a saddle and bridle on and walking around.

Patterson said the pair, as well as his other police horse Chief, have had a lot of training in areas such as crowd control, mounted search and rescue and event security. The training is never-ending and each horse has to be worked with and ridden constantly to stay in the shape required of a working animal.

Sometimes, those items can include things like confetti cannons, cameras, cardboard boxes, rain ponchos, other animals and hordes of people, all to make sure each horse is ready for anything that may come their way.

During her tenure, Bunny has been there, done that, doing everything from parade details, traffic control, crowd management at concerts, search and rescue, even the occasional manhunt, when her services were needed.

Before getting into horses at all, especially mounted police force horses, Patterson said you have to learn a lot about yourself as a person and a handler.

He’s let other officers work with Bunny, but they don’t always mesh the way he does with her.

“I have a really close bond with her and she knows when it’s time to go to work,” he said.

Perhaps the neatest part about Bunny, said Patterson, is that she’s not just a police horse. She’s a family horse.

“I don’t have to worry if the kids or grandkids come over and want to ride,” he said. “She takes care of the family, no matter what.”

Bunny, said Patterson, is the perfect horse to keep him grounded.

“God knew my heart and when I needed something,” he said. “He sent the perfect horses to help keep me grounded and guided. I am so thankful for all she’s done for me.”

Patterson said he hopes to get Bunny all dressed up in her police gear, which includes a badge with her name on it, for one more parade in Hamilton this Christmas season.