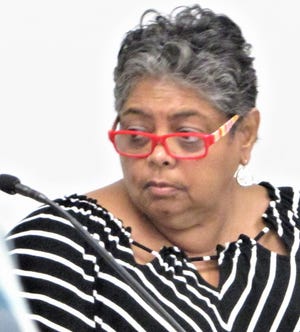 BUZZARDS BAY — Bourne’s fifth town planner since the 1960s will retire in December after riding herd on a long list of projects that have re-shaped the town over the past 25 years — to a point of near-total residential buildout.

Coreen V. Moore was first hired as an engineering technician before merging her work with town planner duties. She can be modest in her arguments to the elected planning board with its competing visions, and quite direct when a deliberative process starts to break down and tough decisions are on the line, past and present town officials said.

“Coreen provided a measure of professionalism in the planner’s office,” Selectman Chairman Peter Meier, a former 16-year planning board member, said. “She quickly became a reliable resource for the planning board and its need for technical assistance. And on projects and zoning issues.”

Originally hired as an engineering technician

Moore, a lifelong Bourne resident and Wampanoag Tribe member, could ably research, read, understand, explain and reconsider impacts of planning, zoning and subdivision controls, town officials and past Planning Board members said. She was known as being approachable and understanding of all viewpoints in a project review, pointing toward solutions to problems stemming from political maneuvering and distrust of some developers, they said.

She could also disagree with misguided and neophyte planning viewpoints and sidestep planning board hostilities, the officials said. But she was never disagreeable, and not one for retorts and I-told-you-so sentiment.

Moore laughs easily, but she can keep her personality in check. She can bring order to piles of plans before her, complete with last-minute revisions. She knows what will play well in Buzzards Bay but not in Cataumet, according to present and past Planning Board members.

Now December retirement beckons. She joined the planning department in 1996. What’s next? “I plan to enjoy, enjoy and enjoy,” she said. “Maybe travel. Did I forget to mention enjoy?”

Prior to Moore, Bourne planning featured an elected board waiting for subdivision plans to cascade into town hall. There were also grander plans.

Plans that led to a protracted legal battle with the town to develop a Cumberland Farms store on Main Street, and a similar plan at the heavily-traveled Bourne rotary, which is still unresolved over site-egress issues.

The Haven Center and the town, meanwhile, are headed to the state Supreme Judicial Court to sort out legal arguments about whether general town bylaws or zoning bylaws should govern efforts to open a recreational marijuana complex off MacArthur Boulevard.

“So far, (Bourne Town Counsel) Bob Troy has prevailed with general bylaw arguments, but this issue could be headed to the U.S. Supreme Court,” Meier said. Both the town and the Haven Center agreed to joint appellate review, he said.

Prior to Moore’s arrival, the town’s professional planning had been scattershot at best. She changed that. The planner position may still evolve after she retires. New Cape Cod Canal bridges are on the horizon and roadways to the waterway will change. Commercial developers are viewing Bourne options. Economic growth is a planning factor.

“An economic development position is in the budget, but it hasn’t been filled,” Meier said. “It may be time to combine that with the town planner; the question becomes what position is filled first?”

Moore’s track record includes helping guide two versions of the local comprehensive plan, updating the open space provision of the zoning bylaws, working on the review of the ill-fated CanalSide Commons at the foot of the Bourne Bridge and assisting with the Main Street streetscape.

Moore was also instrumental in helping attract MarketBasket to Sagamore at the Route 6 off-ramp. And Bourne’s downtown, with its comprehensive permit for development, became a reality on her watch.

In wider scope, she provided some normalcy on regulatory aspects of the Cape Cod Commission when it came to Bourne issues, and to the town’s often strident anti-agency planning board she brought a counter-narrative of sorts.

Board member Elmer Clegg credits Moore on two key fronts. He says she “often kept the board on track when discussions or proposals headed the board toward risky positions that might expose us to legal challenges.

“From the townspeople’s perspective, achieving Growth Incentive Zone status for downtown Buzzards Bay was a project driven personally by Coreen,” Clegg said. “She collaborated professionally with the Cape Cod Commission and built a strong relationship with our regional planning organization. She is highly respected by the commission staff.”

What’s next for Bourne?

Clegg says Bourne’s next priority in terms of professional planning should involve a blending of “compliance level planning with economic and community development.”

He said that once the federal commitment to new canal bridges and commensurate funding for them become a reality, Bourne should undertake “a realistic study of how zoning and economic development can enhance the town’s attractiveness as a great place to live, to work, and to visit.”

He said Moore’s retirement and the prospect of a new town administrator “makes this an ideal time to work out the organization structure to move forward on this.”

Board member Christopher Farrell says Moore’s retirement will create a void in the system of planning.

“Her professional expertise and her being a native of Bourne, allowed her to craft an amazingly professional ‘Downtown Zoning District;’ a zoning bylaw that garnered awards and praise from so many.

“When that zoning changed was brought to town meeting, it was one of the only ‘new’ zoning changes that received a unanimous vote of approval,” Farrell said. Her retirement and historical knowledge are a loss to the town of Bourne.”