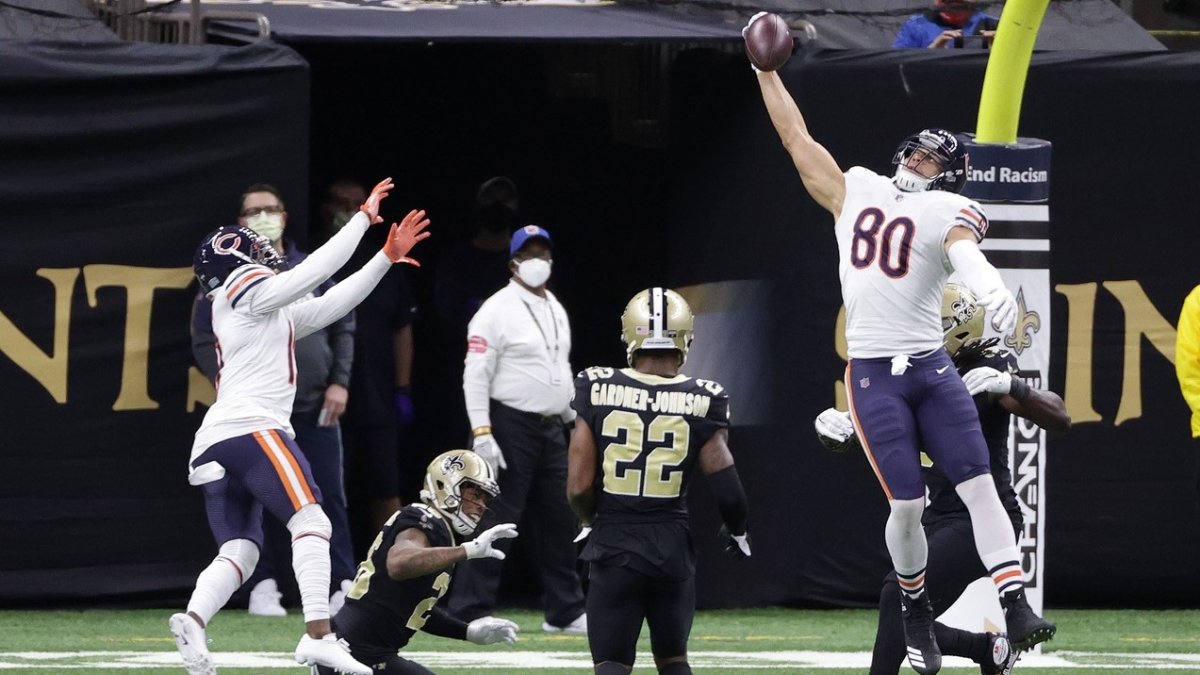 Returning to the Superdome for the 2020 Wild Card game was an emotional experience for Bears tight end Jimmy Graham. He joined the Saints the year after they won the Super Bowl and it didn’t take long until he became a force in their offense. Over five seasons, Graham became the all-time leader in catches, receiving yards and touchdowns for tight ends in New Orleans. He was a three-time Pro Bowler and was recognized with two All-Pro honors. But over those five years the Saints could never make it back to the NFC Championship game, let alone the Super Bowl. Then, after playing one season under the franchise tag, Graham was traded to Seattle.

Fast forward back to 2020, it’s not Graham’s first time back in New Orleans, but it’s been many years since he’s played in a postseason game there, and obviously he wants to win. But the Bears weren’t able to get anything going all game long, with Jimmy Graham scoring the only touchdown as time expired. Instead of celebrating the meaningless score, or even heading back to the Bears’ sideline, Graham opted to keep running through the endzone, into the tunnel and out of sight.

Many wondered if this was Graham’s swan song, his own unique way of saying goodbye to the game in the place that launched his Hall of Fame career. According to Graham himself, the thought did cross his mind.

“Yeah, I certainly did (consider retiring) for a second there,” Graham said over the team’s mandatory minicamp last week. “I’ve got a lot of unfinished business. It was very difficult for me to go back in the Dome and especially to lose. I’m a pretty fiery person. I’m a pretty enthusiastic person. And I hate losing, simple as that.

“It was a lot of frustration there, because I haven’t won a ring and that’s all I think about. So just knowing it’s another year, I wasn’t sure what I was gonna do. But I talked to Ryan and talked to Matt, and I’m on board and ready to do whatever it takes to get back in that position and move forward and hopefully to make a run.”

Ultimately, Graham says the reason he is back for another season is because he believes he can still play at a high level— and he believes he and the Bears have a legitimate shot to win it all this year.

When relaying his conversations with Graham over the offseason, Matt Nagy relayed the same sentiment.

“I just think it’s important to everybody on this (press conference) call to understands one thing: Jimmy’s done a lot of things as an individually, right? He’s scored a lot of touchdowns. He’s been playing with a lot of great quarterbacks. He’s been in great offenses. He’s done a lot of stuff. He’s won a lot of games. But I say this and I mean this: This guy cares about one thing and one thing only — and that’s that trophy. He wants to win the Super Bowl. That’s the only thing he cares about.

“So for him to decide to come back here and continue to play, he’s not doing it for records. He’s not doing it because he just wants to play a little bit more or get one more year in. He’s doing it because he believes we have the ability to be really good. He knows that. And he is a valuable, valuable piece of this offense in so many different ways — in the classroom, in practice and on game day — that just is worth every penny. So I’m excited about it. I’m ready to see him and use him in certain ways.

“But there’s one reason why he’s here and that’s to win the Super Bowl.”