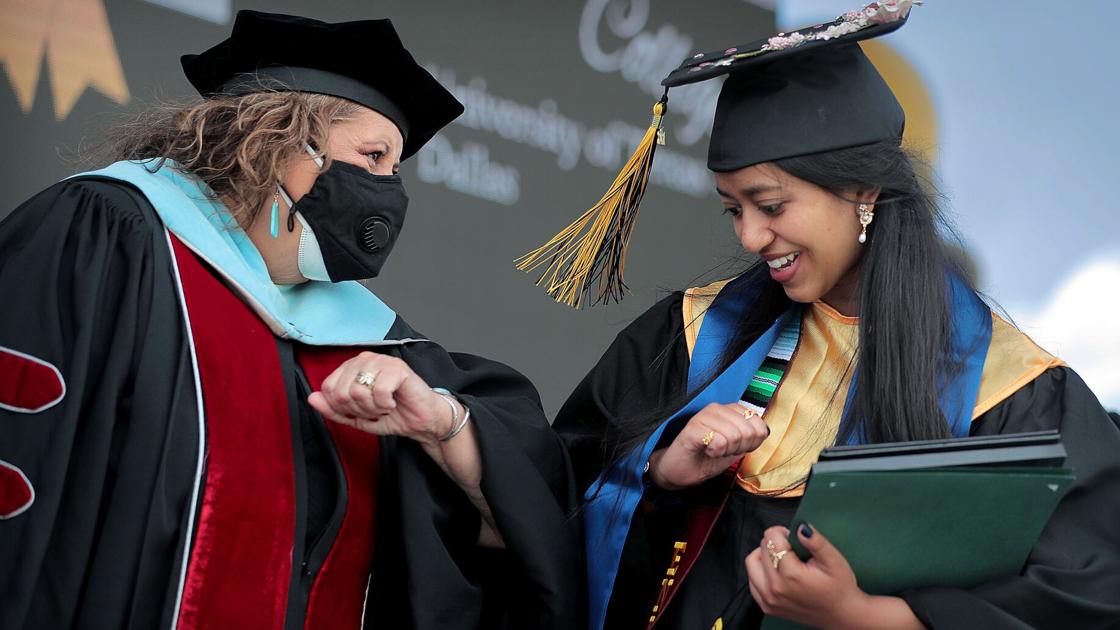 The bookshelves in Veronica García’s office at Santa Fe Public Schools’ administrative building were bare on her last day there. Her desk was cleared of supplies, and the closet, with the door standing open, was empty.

The whiteboard hanging on a wall no longer had notes about her plans for improving student outcomes.

García is leaving the position she has held for five years — her second stint in the district’s top job in two decades. One thought came to her mind as she contemplated how she would feel as she turned out the lights in her office for the last time later that afternoon.

“I will feel that I was so fortunate to have been given this position, to have this capstone in my K-12 career,” García said.

She is retiring from a 48-year career in which she has served, in some ways, as the face of public education in New Mexico.

García has worked as a teacher and principal, as well as her two terms as superintendent. She also served as the state’s first secretary of public education under former Gov. Bill Richardson.

She did it all for one reason, she said: the children.

“We’re in the kid business,” García said. “We have to ensure we have high standards and do the best we can for kids who go to public school so they have a chance to change their life’s trajectory.”

García is still on the job through the end of June, but she vacated the office June 18 to give her successor, Larry Chavez, time to move in.

“I want him to hit the ground running and ready,” she said.

Taking an hour to reflect on her life, García recalled a caring adult who inspired her when she was an uncertain teen navigating a challenging home life and the rigors of high school. That teacher was Ann Watters, a speech and English teacher at Albuquerque High School, who perhaps saw in young Veronica an education star in the making.

“I wasn’t very good when I first started out on the speech team,” García said. “She believed in me and saw the positive and built on those strengths. She had that knack of believing in you and seeing things you can’t see about yourself at the time.”

Colleagues and others — including García’s husband, Michael Wilson — say she embodies those same qualities of trust and belief in children throughout her career.

Piñon Elementary School Principal Janis Devoti — who is retiring at the end of this month after 49 years as an educator — said when García visited her school, she was always excited to see the students. That energy rubbed off on staff members and students, Devoti said.

García always stopped to talk to children and find out about their lives and what they liked, she added.

“Whether it was a non-English speaker or a child in our medically fragile room, she was relatable,” Devoti said. “She could relate on a human level to all students.”

Wilson, who likes to tell an amusing story of how he and his wife met 21 years ago via email — just like Tom Hanks and Meg Ryan did in the 1990s romantic comedy You’ve Got Mail — said much of that love and devotion comes from García’s own challenging childhood.

He said his wife, an Albuquerque native, grew up in extreme poverty and became the breadwinner for the family as she approached her teen years. Ever resourceful, she convinced her fourth grade teacher to let her take the class Christmas tree home for winter break because her family could not afford one, he said.

García declined to speak about the difficult parts of her childhood other than to say she was raised in large part by an aunt, Marie B. Castillo, who adopted her when she was 10. Her family was not just dirt poor, García said, but once lived “on a dirt floor.”

She missed out on getting her high school graduation photo taken because she was working as a server that day at one of the local American Legion posts to earn money for her family.

García grew up wanting to be a teacher because she understood teachers can make a difference.

She gained confidence from taking part in speech and debate classes, becoming articulate on number of issues. The civil, political and military unrest of the time — the late 1960s — provided regular material for her debate topics and gave her a crash course in American and world history and culture.

She studied education leadership at the University of New Mexico. Her first job in public education was as a substitute teacher at Ernie Pyle Middle School in Albuquerque’s South Valley. She didn’t own a car, so she took the bus to work.

Soon, she was teaching special education at Manzano High School in Albuquerque, working to help those kids grasp basic math concepts and move them on to algebra — one of her professional successes she is most proud of, she said.

Then she took on the job of principal at Albuquerque’s Rio Grande High School, where she developed a principal’s council of students of varied backgrounds. Bookworms and gang members joined together to advocate for fellow students. She said giving them a voice also gave them access to power, and it made a difference in their lives.

Santa Fe High School Principal Carl Marano, who will be joining Chavez’s administrative team as assistant superintendent for K-8 school support, said García often talked to him about her days at Rio Grande High, stressing the need to advocate for all students.

And, he said, she taught him two valuable lessons about being a principal.

“Visibility and accessibility,” he said. “You have to be visible, especially at a larger high school, and be at as many events as you can and be accessible to families. It’s part of the job, this is what you signed up for. She taught me if you are going to be an effective leader, you must remember we are serving our students and families.”

García was first superintendent of the Santa Fe school district from 1999 to 2002, after serving as an associate superintendent. She discovered she had inherited a financial mess from her predecessor and set about making tough budget choices, including giving teachers such a small raise The New Mexican called it a “a two-dollar-a-week slap in the face” in an editorial.

She was determined to balance the budget amid a grand jury probe and an investigation by accounting and consulting firm PwC, also known as PricewaterhouseCoopers, of the district’s financial management practices.

Within two years, Santa Fe Public Schools had regained its financial footing, and García was named New Mexico Superintendent of the Year.

She became the state public education secretary in late 2003 and served until summer 2010, working with legislators to invest more money in prekindergarten programs, create a charter school division and a Math and Science Bureau, and initiate a Health Report Card to keep track of how schools were handling students’ health issues.

“I was humbled and overjoyed and excited, and there was also a bit of trepidation, right?” she said of her appointment to the position. “This was the first secretary. We were creating a new department, a new way of doing things.”

García spent several years as the executive director of the Albuquerque-based nonprofit child advocacy and policy organization New Mexico Voices for Children. She then took on the job of interim superintendent at the Santa Fe district. Soon, she was offered the job on a permanent basis.

“I was enjoying the work, and I thought I was making a difference, when the [school] board approached me and asked if I wanted to take on the job permanently,” she said. “It felt right; it felt like I had come home.”

Among her achievements under her most recent watch: The district’s graduation rate rose from 68 percent in 2016 to over 86 percent in 2020. She said this was due in large part to an intensive drive among district educators to connect with every junior and senior — even with home visits — to emphasize the importance of a high school degree.

“We were really tracking them by name, by what they needed, and said, ‘You’re going to graduate and we’re going to do everything we can to get you across,’ she said. “And it worked.”

She’s not fully retiring, she said. She plans to start a part-time consulting firm and initiate a fund to give impoverished and homeless students $50 stipends to spend on something they need to believe they belong.

She said she did a lot of crying over the past month or so after she announced her decision to leave. Some tears flowed during a June 17 school board meeting, in which she spoke of the district reaching its Camelot moment in that its employees had put “hope, trust, truth and loyalty to another above one’s self.”

During that meeting, she said she made decisions for students based on the idea she was making them for her own family members.

As she prepared to leave her office for the last time June 18, Cody Dynarski, a former news television camera operator who signed on to work as the district’s social media expert 18 months ago, popped into her office to give her some information and remind her she had a radio interview to do before she departed for the day.

He called Garcìa “the best boss” he ever had.

“She’s got a caring and compassionate side, but she expects a lot out of you,” Dynarski said. “She makes you work, but at the end of the day she’ll tell you that she loves you.

“There’s just something about her that makes you want to go to war with her and for her.”