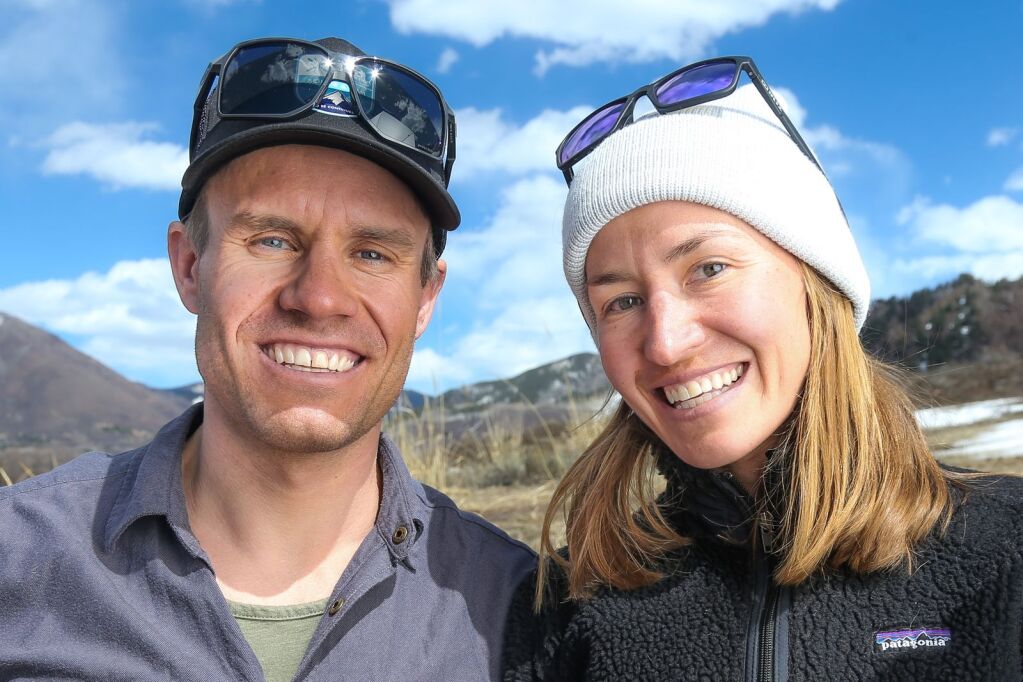 Aspen’s Simi Hamilton wasn’t chasing any last shot at eternal glory. In many ways, he already achieved that after a decade-plus on the U.S. cross-country ski team.

Then, with everything how he would want it — well, mostly — the three-time Olympian could ski away into the sunset with his wife, fellow ski racer and recent retiree Sophie Caldwell Hamilton, and begin their next chapter together.

And, outside of missing their final races stuck in quarantine, that’s how it happened.

“Obviously, I wanted to do well and I wanted to feel like I was still contributing to the collective, successful performance of the team, but it was way more about spending a season with those young boys,” Hamilton said of his U.S. teammates. “I wanted to end on a really good note. Both Sophie and I wanted to do that and we felt like we had really strong seasons and everything just kind of lined up. It was great.”

But his legacy will be defined by much more than race results.

“He’s just a natural magnet. He’s got a big smile. He’s good at everything. Frankly, the result I’m the most proud of with Simi is his ability to lead this team, particularly in his final season,” said Matt Whitcomb, head coach of the U.S. cross-country ski team. “These two have been real pillars on the team for 10 years. So it hurts on a lot of different levels.

“In the end, I’m grateful to have a team that mourns the retirement of its athletes. It’s not something that happens on every team. It’s exciting. It’s very bittersweet.”

‘Those emotions definitely come back’

Hamilton’s final race was spent in quarantine, after both he and Sophie tested positive for COVID-19 during March’s World Cup finals in Switzerland. What was meant to be a celebration was mostly taken away by the pandemic — a sendoff that would have included celebrating friend and teammate Jessie Diggins’ historic overall title on the women’s side — but it just wasn’t meant to be.

But, this just means Hamilton’s final memories of actually racing will be from the world championships in Oberstdorf, Germany. His final race was a team relay March 5 that included Gus Schumacher, Scott Patterson and David Norris, finishing eighth.

Hamilton also paired up with Schumacher in a team sprint at worlds. The 20-year-old from Alaska is one of the more promising young prospects the U.S. national team has and is the heir apparent to Hamilton. Schumacher and Hamilton grew close over this past winter, and them teaming up at worlds was fitting in many ways.

“It stressed me out because I was teamed up with this amazing team sprinter. But I wouldn’t give it up for the world,” Schumacher said. “Looking back on the past year, I realize how important it’s been to have him around. I did know him well before this, but not really as a teammate too much.

“Spending a lot of time with him on the road this winter, I learned a lot of stuff and picked up how much he had all of our backs. That was cool to see him really take that role and be so proactive about passing the torch.”

The beginning of Hamilton’s career came with its own excitement. His first World Cup start was Feb. 6, 2010, where he finished 28th in a classic sprint in Canmore, Alberta. Nine days later, Hamilton made his Olympic debut, finishing 64th in a 15-kilometer freestyle at Whistler Olympic Park.

He was 22 at the time and had been named to the 2010 Olympic team despite not having had a World Cup start until only days before and despite not actually being named to the U.S. ski team as an official athlete for the first time until the fall of 2010.

“That was a pretty awesome way to be able to start an international racing career. It all kind of blended together after that, but when I’m able to really look back and reflect on certain special experiences and moments that I had, those emotions definitely come back,” Hamilton said, reflecting on a much different time in the country’s cross-country skiing evolution. “There will probably be several people, men and women, who don’t make the Olympic team (in 2022) that have scored World Cup points. I think it’s a testament to how far we’ve come as a national team and just as a U.S. ski community in general and how much deeper we are than 10 years ago.”

Hamilton’s other favorite memories include his lone World Cup win, which came Dec. 31, 2013, in a freestyle sprint in Lenzerheide, Switzerland. He also had two podiums during the 2015-16 season and another during the 2016-17 season.

One trait that made Hamilton stand out as an athlete was his longevity as a world-class sprinter, a discipline usually dominated by younger, fresher legs. But, even in his final season this past winter, Hamilton was holding his own in the shorter races.

“He’s doing that as a 33-year-old sprinter in a field that lends itself to younger bodies, frankly. His longevity as a sprinter has been remarkable,” Whitcomb said. “There is no question that has become a huge challenge in these last several years. One of the things that will go unnoticed in terms of results was the focus Simi put into his distance racing this year.”

‘This guy is in it for so much more than himself’

Hamilton said he’ll miss the amazing locations, but not the constant traveling and living out of a duffel bag. He’ll miss the race-day feeling, for sure, but more so the camaraderie found with everyone else on the U.S. ski team, from athletes to coaches to the support staff and beyond.

“For the rougher moments, there were a lot of those over the 11 years, whether they were just really terrible races or something wasn’t clicking emotionally and I didn’t want to be on the road,” Hamilton said. “To be on a team with so many incredible athletes and coaches and staff to really pull you out of whatever funk you find yourself in, that was one of the coolest parts of my long career, was just spending time with people who really supported you through thick and thin. That was probably the thing I’ll remember the most.”

Hamilton said there was a “magical” quality being around so many like-minded individuals who were constantly being pushed to be his or her best. And in the latter stages of his career, he became one of those mentors who helped create the magic.

Schumacher, for one, isn’t taking for granted the time spent with Hamilton this season. Nor is Whitcomb, who pushed Hamilton into being more of a coach than a ski racer this season, a role the Aspenite seemed to relish.

“He did a good job of setting this team up for success over the next period,” Schumacher said. “This guy is in it for so much more than himself. There is a depth here that I really didn’t understand. I was so grateful to be his teammate.”

Hamilton’s roots go back to AVSC, a place that is likely to pull him back in after his racing career. And his career success has certainly had an impact on many of the club’s ski racers who came up behind him, including 2016 Basalt High School graduate Hailey Swirbul, a current member of the U.S. ski team.

“There is a poster of him in the wax room that’s actually still there today. But I remember seeing that poster. That’s kind of the first I really knew about Simi, and the poster promotes cleaning the wax room,” Swirbul said. “It was always really inspiring to be able to see people from my own club who have climbed the ranks and were on the U.S. ski team like Simi. So I was definitely in tune to what he was doing and following him as I was growing up. It was always really special when he would come back and be on the trails at home.”

Hamilton’s visits back home were more meaningful than what meets the eye. As August Teague, the current AVSC Nordic program director and Aspen native, pointed out, most other disciplines of skiing and snowboarding have local or regional events where they can watch the world’s best athletes compete, from X Games at Buttermilk to World Cup alpine ski races on Aspen Mountain.

But World Cup races in cross-country skiing haven’t been held anywhere in the U.S. in two decades. Last season, races had been scheduled to take place in Minnesota, but were canceled because of the pandemic. So any time a national team Nordic athlete like Hamilton can spend in-person time with the local kids, it has ripple effects in the sport.

“It’s easy to dream, but it’s hard to connect the dots,” Teague said. “To have athletes who have made it to that level from the community is sort of the only thing we have because we don’t have those other events in our community for those athletes to inspire and look at.”

Teague already added an Olympian to his AVSC staff this past winter in Oregon’s Morgan Arritola. Naturally, he has his eyes on Simi and Sophie as they enter retirement. Sophie Caldwell Hamilton, a native of Vermont, competed in the 2014 and 2018 Olympics and started 139 World Cup races over her career. She started dating Simi in 2014 and the couple married in fall 2019 in Vermont.

Simi, Sophie and Sadie Maubet Bjornsen were all part of the national A team this past season and have all since retired, leaving quite the void in the American locker room going forward.

“We are losing two incredible people. The story of Simi isn’t complete without it having a lot to do with Sophie. Let’s be honest, he’s fighting out of his weight class with the woman he married,” Whitcomb said. “Selfishly, I hope he finds himself in the ski world and specifically the cross-country ski world in some capacity, because we need people like this. And the same goes for Sophie. But regardless of what they do, I’m really excited for whoever catches them.”

What that next step is remains mostly unknown, outside of re-establishing roots here in the Roaring Fork Valley. The couple is rebuilding a home in Basalt and will look for work at some point, but for now it’s all about finding their footing after a decade living on the run as a professional skier.

Is coaching in Simi’s future? Possibly. Teague will certainly welcome him with open arms. Even if nothing official happens, Hamilton will no doubt come to be a familiar presence in the valley after so many years on the road, a prospect that has him excited.

After all, this has always been his home, and without this community and the local club, those three Olympics may have never happened.

“Without AVSC and without the coaches and teachers and parents who I grew up around, and without the teammates I had when I was a junior skier, there is no question in my mind that what I did over the last 10 years wouldn’t have been possible,” Hamilton said.