Ahead of retirement, Nursing Dean Nena Peragallo Montano reflects on her career 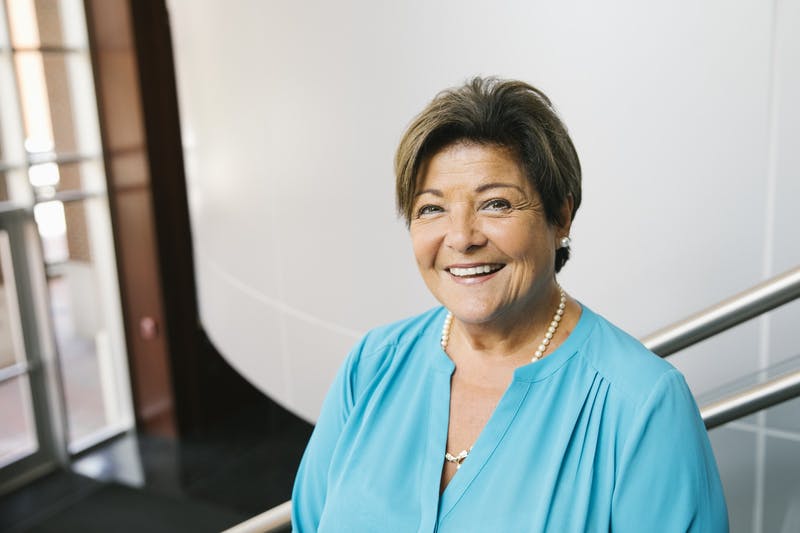 For Nena Peragallo Montano, nursing is all about the people.

She has served as dean of the UNC School of Nursing since 2017, and her leadership has made the school one of the top-ranked programs in the country.

Now, as she approaches retirement, Peragallo Montano reflects on her legacy in nursing education.

Nursing was the only career Peragallo Montano ever wanted to pursue.

She shadowed other health care professionals but was drawn to nursing because of the patient interaction.

“I think that was the draw — getting to assist people to stay healthy and maintain their health and keep them away from disease,” she said. “It’s very rewarding to see people progress and get better.”

Peragallo Montano, who is from Viña del Mar, Chile, moved to the United States in 1976. She continued pursuing her nursing education at West Virginia University, eventually earning her Master of Science in Nursing at the school. She then received her doctorate in public health at the University of Texas.

In her career, Peragallo Montano has focused her research on health disparities, public health and community practice. She said one experience that was particularly transformational was her time treating HIV/AIDS among Latina women in the 1980s in Orlando.

“That really changed me and I thought, you know, we really need to know more about this disease at that time,” she said. “I started looking at the CDC data and looking that the line for Latina women kept increasing and increasing, and we weren’t doing anything prevention wise for that population.”

Peragallo Montano has received several accolades for her dedication to her work in the South Florida community. She was named one of the 100 Most Influential Leaders of 2012 by HispanicBusiness.

In 2017, Peragallo Montano brought her expertise to UNC, where she saw opportunities to strengthen the School of Nursing.

‘Nothing you do is alone’ — Faculty and staff impacts

Over the past five years, she has worked to redesign the curriculum and double enrollment in the accelerated BSN program at UNC. She said none of this would have been possible without the help of faculty and students.

“Nothing you do is alone — you work as a team and as a group,” Peragallo Montano said. “We developed a strategic plan together with faculty, students, staff and even members of the community.”

Her efforts to collaborate in decision-making have been valuable for faculty. Marianne Baernholdt, associate dean for global initiatives in the School of Nursing, said Peragallo Montano fosters a sense of partnership with faculty and staff.

“I like her approach to things,” Baernholdt said. “She is open to suggestions and we have good talks back and forth. Her door is always open to faculty, staff; anybody that wants to talk to her can come into the dean suites.”

Students and faculty alike have felt that this aspect of Peragallo Montano’s leadership has been particularly important in making the School of Nursing the high-ranking institution it is today.

Lilian Bravo, a doctoral student in the School of Nursing, said Peragallo Montano’s willingness to collaborate with students is an important impact the dean has made on the school.

“For me, one of her biggest impacts is her ability to connect and act with kindness and openness to hearing different perspectives,” Bravo said. “I think that is something invaluable that I hope continues to stay here at the School of Nursing.”

This openness was particularly important in redesigning the curriculum for the School of Nursing, a process that had not been done in 20 years prior to Peragallo Montano’s arrival.

According to Louise Fleming, the school’s associate dean of undergraduate programs, the new curriculum was implemented in 2019 and emphasizes broader areas of nursing in community settings.

“Our focus had always been more acute-care, hospital-based, but we recognized that nursing is more than just practice in the hospital setting,” Fleming said. “You can think of the school system, clinics and provider offices, health departments and federally-qualified health centers. Those areas were not focused on in our curriculum — other than our public health course — and now we are incorporating those opportunities in other courses as well.”

“I think the dean changed the landscape for us,” Bravo said. “One of the things I saw was we started getting faculty members with more diverse research topics.”

“She came in and she had a lot of energy and spunk and flare, and that’s how she led,” Lackey said. “That was really important for me to see because this was a non-white woman leading the No. 1 school of nursing in the nation.”

Though her time at UNC is coming to an end shortly, Peragallo Montano still has big plans in motion, notably trying to gain approval for the renovation of Carrington Hall, where the School of Nursing is housed.

In addition to leaving this tangible contribution behind, Peragallo Montano hopes to leave a larger legacy by stressing the importance of the nursing profession in the community and the world.

“We should really think of investing in nursing education, because that’s the future for us in health care — to provide quality and safe health care to the public,” she said. “I would like that to be what we strive for. The more we learn, the better we are equipped to confront difficult circumstances.”

To get the day’s news and headlines in your inbox each morning, sign up for our email newsletters.