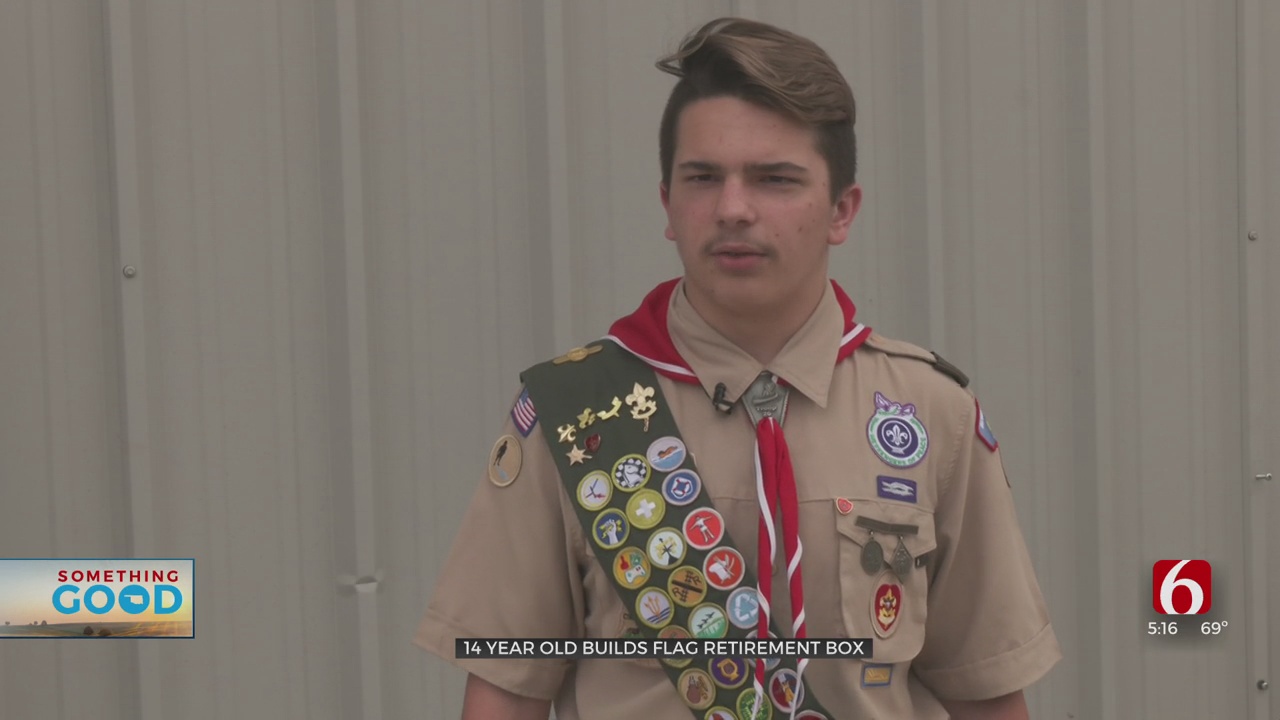 With a little bit of help from the community, a 14-year-old Green Country teenager just finished building a flag retirement box. He is donating the box to the VFW 577 in Tulsa.

One thing you need to know about 14-year-old Alex Knecht, if there is an extra mile to take, he will take two.

“It started with pieces of steel on the ground and really he has a vision, and he has big heart, and he cares. I am just very proud,” said Knecht’s mom, Vicki Smith.

“I have a lot of family who are either military or had done something around military and I realize how much they sacrifice for us,” said Knecht.

He also wanted to honor a ceremony close to his heart.

“Boy Scouts is one of the very few organizations that is able to properly retire flags on mass,” said Knecht. “A man named Ken Henderson was a very big inspiration to me. He was the first person who taught me how to retire one of these flags.”

With the help of his troop, family, and friends, Knecht designed and built a flag retirement box. He is donating the project to the VFW 577 in downtown Tulsa.

“Right now, we have like a triple size mailbox, and it just gets filled up and overflows,” said VFW 577 Commander Dan Fuller.

The one Knecht built is much bigger than what the VFW has now, so the gift is functional as well as kind.

“It means a lot that people who haven’t necessarily served, want to protect the flag and give it due honor,” said Fuller.

Knecht said he wants every person who drops a flag off at this box to understand that they are seen.

“I want them to know that we will never forget any of their pain, any of their joys and the veterans who have served or those going into it will always be remembered as the heroes of this country,” said Knecht.

Knecht and his mom wanted to give a big thank you to some of the people who made the project possible: “John Hammock (Vroom Racing) paid for all the steel and safety equipment for the boys and we used his shop. Gary (Harley) Hawver brought all his equipment to the shop to teach each kid to weld. They earned their welding badge which made Alex become a double Eagle (that gave him 42 badges). Tome Dawson (FullTiltWrap) donated the wrap. He said he believes in Boy Scouts and also has an Eagle Scout working at his shop.”